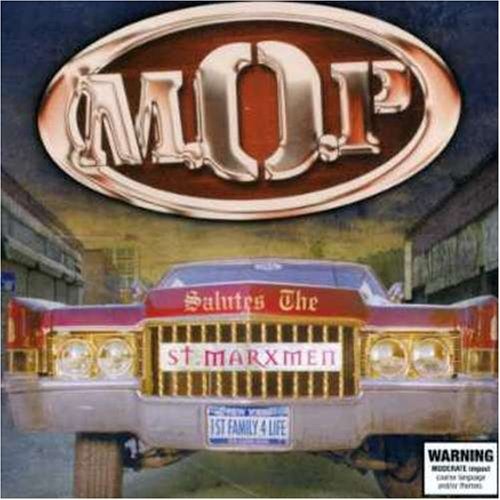 “From the Marxmen Cinema Series mixtapes.” This informative notice appears on the back cover inlay of “M.O.P. Salutes the St. Marxmen,” but it only leaves more questions than answers. First question – just who the hell are the Marxmen anyway? The press release that accompanies this compact disc is totally unhelpful in that regard. They’re either another alias for the M.O.P. First Family, a subset of the M.O.P. featuring Teflon, or just another random group of schmoes making mixtapes. That leads to the second question – who the hell has heard of the “Marxmen Cinema Series” anyway? There are more mixtape series on the market today in bootleg format, let alone official retail releases that are legit, than I can even begin to count. In turn that leads to the third and most important question – who has the money to buy all these mixtapes anyway at $15 to $20 a pop?

Putting all of that aside for the moment, it’s good to see M.O.P. back. Ever since they signed with the Roc several years ago, rap fans have been salivating at the prospect of a Mash Out album with beats by Kanye West and Just Blaze; with guest appearances by Beanie Sigel and Cam’Ron. Personally the latter didn’t thrill me much but the M.O.P. did have a long-standing relationship with Jigga going back to the song “4 Alarm Blaze” in 1998 so the collaboration seemed a natural. For no apparent reason whatsoever the Roc let all of that sizzle fizzle and did nothing. M.O.P. put out a best of “10 Years and Gunnin'” and the rock remix “Mash Out Posse” album, both without the Roc-A-Fella imprint. Fans who suspected the relationship may have soured got their confirmation when M.O.P. left the Roc without ever releasing an album and wound up on G-Unit Records. In the liner notes to this album they even thank Curtis ’50 Cent’ Jackson, implying he more or less bailed them out before the lights went out and the phone lines were cut off. Curiously this album is not on the G-Unit imprint either, although hopefully that’s more likely than a Roc release ever was. Since they spent the summer touring with Em and 50, one can only hope they’re back home in Brownsville now preparing an album for a late 2005 or early 2006 release.

“M.O.P. Salutes the St. Marxmen” is merely meant to tide you over until that album is ready. This release is a little more than what you’d get from a mixtape, but a little less than what you’d expect from a new M.O.P. release. You’ll already be familiar with some of the material on this album; material that’s been given a little bit of M.O.P. flair. Ol’ Dirty Bastard’s “Pop Shots” is a remix with Lil’ Fame providing some new added vocals over the same ol’ beat. “Put it in the Air” now has some extra lyrics from Jay-Z. Some of the song titles throw you a curve though. I expected “Muddy Waters” to be on some Redman shit but in fact it’s a new track produced by Tommy Tee. What’s more surprising is that the normally aggro duo sound positively thoughtful and reflective here:

Billy Danze: “Yo I was drivin an $80,000 car before I got with Dash
But I won’t lie and say this ain’t about the cash
Cognac, six-pack, and some dough in the stash
Sit back and watch my children play in the grass
And hopefully through this writin I’m enlightenin the hood
.. Yeah; but it ain’t all good
Everyone that did me wrong, know this nigga strong
So hopefully for you that animosity is gone”

Other standout songs on “St. Marxmen” include the smooth but deadly 9th Wonder melody for “Instigator,” the bass and gun heavy R&B tinged “Take a Minute,” Nottz pounding beats for the equally hard pounding rhymes of “Big Boy Game” and Fizzy Womack’s own “Hip Hop Cops” featuring Wyclef Jean. Teflon’s solo cut “Suicide” is also some type nice shit, as Tef has always been underrated as a vocalist and lyricist and he gets a nicely ominous violin track from Baby Grand and L. Elliott. Despite the “mixtape” moniker attached to this release, there are no bad blends, annoying gunshots, or whack self-indulgent shoutouts littered throughout. Aside from a couple of pointless skits and a few moments that sound like potshots taken at the Roc you’d hardly know it was a mixtape at all; and you might wonder how they even got clearance for the Roc related material on the album if they’re no longer down with the diamond. The only major problem with “M.O.P. Salutes the St. Marxmen” is that the Danze and Fame seem to have lost a little of their adrenaline laced attitude. It’s as though a bad record deal and the inability to release more new material have sapped their strength and at times you’ll start to wonder why they aren’t screaming and yelling more. For most rappers that might be a good thing, but M.O.P. are best when they’re hoarse and coarse.