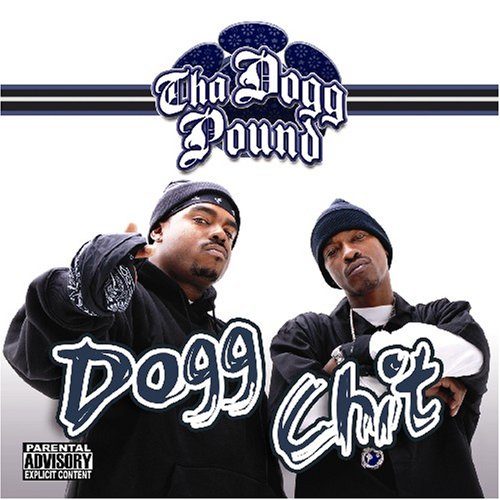 Tha Dogg Pound is back after a little over a year hiatus since their recent comeback album known as “Cali Iz Active”. Daz and Kurupt will always be known for their work as part of the infamous Death Row records label in the mid 90’s, but even then, they have always been right under that tier of greatness. Greatness continues to elude them a decade later with the release of “Dogg Chit”, which kinds them playing second fiddle to true West Coast greats.

Koch Records is an interesting place for any artist to land nowadays. The label has basically made a name of itself for picking up well known veterans that have no home and letting them release an album in their own vision, which has garnished some mixed results. Instead of a step forward, “Dogg Chit” sounds like a few steps backwards for all of rap music in general. The subject matter is tiredly misogynistic and riddled with violence. Sure, that’s what DPG is known for, however, there are still ways to make these subjects original with a little creativity–an ingredient that is lacking on “Dogg Chit” as some of the songs sound like uninviting rehashes.

The two openers of this new album are relatively interchangeable as they are both anthem-like joints with “Get Out My Way” and “I’ll Bury Ya”, with the latter getting the best of the two. “I’ll Bury Ya” rides out on a Daz Dillinger beat that is carried by a constant sythetic backdrop that constantly changes its pitch. The gat and I’ll bury ya!” It’s a catchy song if you are in the mood to cruise around and get some frightened looks from passing motorists.

The depth of this album is in serious question after 5 tracks, which can be realized by the titles of the tracks alone not to mention actually listening to them. “Anybody Killa”, as part of that mix, is no different, but it is different by recruiting some help from the continuously reliable The Game. Daz, who supplies the beats for the entire album, takes a little bit out of the Dr. Dre handbook for this one. In fact, Kurupt offers a verse that will remind fans of the infamous ‘bitch’ verse from “Xxplosive” on “The Chronic 2001.”

“Vibe” featuring Snoop Dogg is a successful single because it strays from the rest of the albums formula by finally sacrificing the overly aggressive attitude. At this point, most every rap fan has caught the video for this on BET and sung along to Snoop’s chorus and nodded to the relaxing, almost Pharrel-esqe production. The song brings to attention the fact that perhaps the three best tracks feature other artists when adding in “Where You From” featuring the underrated Bad Azz, which makes one believe that the DPG might need help to reach a higher level. Daz Dillingers’ beats are consistent, but it would be nice to hear some Soopafly, who does co-produce a few, Battle Cat, or even more ideally Dr. Dre.

There are merely a few tracks that are not boasting the gangster bravado lifestyle, but that is only to take a walk on the woman bashing “Dat Ain’t My Baby” is like a toned down version of Ice Cube’s recent song, “Child Support”. Basically, it is like listening to an episode of Maury in rap form as the two emcee’s shamefully deny their parental status. “Can’t Get Enough” featuring Too $hort, who drops the weakest feature, is just what you expect it to be in a bad way.

The album is only 14 tracks deep, but at the end it feels like Daz and Kurupt are just treading old water with “Throw Ya Hood Up”, which sounds like a track straight off of WC’s “Ghetto Heisman” album and “It’z A Good Day”, which thematically parallels Ice Cube’s classic.

It seems like “Dogg Chit” is the last hurrah for the DPG. This was a great opportunity to return to their top form expressed in earlier CD’s like “Retaliation, Revenge and Get Back,” “Kuruption” and, of course, “Dogg Food”. The marketing was there, despite the lesser buzz than in the glory days. While “Dogg Chit” is better than the slew of independent releases from the two in the recent few years, it still falls short of the potential inside them. Fans will be disappointed by the fact that there is nothing new to listen to here.