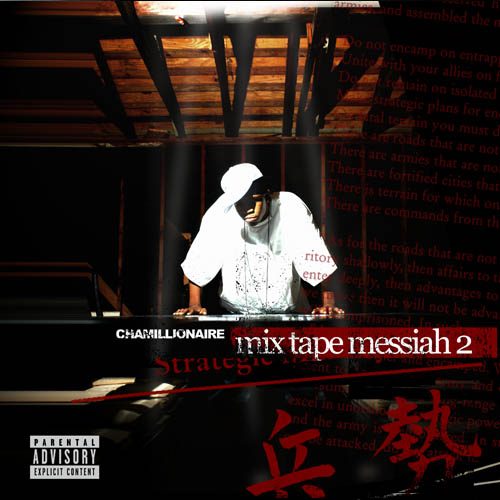 One of the most versatile lyricists in hip hop, Chamillionaire is on top of the game right now. Behind his humongous hit single, “Ridin’ Dirty,” a platinum debut album, and four million ring tones sold, Chamillionaire is one of hip hops brightest young stars. With his second album, “Ultimate Victory” out in stores this April, Cham is ready for another blockbuster success.

With this increased success, it’s only natural for Chamillionaire to start moving away from the mixtape scene, where he’d been prolific enough to have a “Greatest Hits” compilation before ever releasing an album. For fans used to him releasing a new material every 4-5 months, this can seem like something of a let down. Realizing this, Chamillionaire is giving away “Mixtape Messiah 2” for free.

Despite not making any money from this project, Chamillionaire approaches this with the intensity of a man starving for meals. From the first song, “Guess Who’s Back,” Chamillionaire is in top form, wrapping his voice around its banging synthetic guitar and snapping drums effortlessly. Chamillionaire’s delivery is amazing, transitioning from stutters to his sung hooks with ease. He approaches any style of production with the same intensity, ripping the east coast sound of Nas’ single, “Hip Hop is Dead,” renamed “Hip Hop Warning” here, a scathing shot at record labels and the industry in general:

“All rich rappers do is complain
Everybody arguing to be on top of the game
9 out of 10 raps about copping them thangs
Or how the gat go braat, braat, braat, braat when it bang
[…]
The label don’t want you to be Master P
Took the Master and put it right after P
Bump it master, but I won’t let it master me
You’re an idiot if you’re giving up your masters free
Corporate America is f-ing up the rap game
While we argue about which rapper got the phat chain
You real gangsta you pulling out your gat man?
The real gangsta who ever own the rap name”

As good as the lyrics are, putting them down on paper simply doesn’t do them justice. Chamillionaire’s delivery and breath control is among the best ever put down on record. He moves from speedy tongue-twisting raps, to a slower style, using his voice as another instrument. Even better is the intensity that radiates from him. Success hasn’t dulled his edge, if anything it’s made him better. It doesn’t matter what he’s rapping over, from the dirty south beat of “Let Em Know” to the cover of Jay-Z’s “Show Me What You Got.”

This isn’t to say Chamillionaire hasn’t recognized his success, or is above sitting back and having fun with a track. He can boast with the best of them, reminding us all at how far he’s come on “Picture Me Rollin,” one of the smoothest tracks he’s ever rocked over. He constantly takes shots at people who didn’t think he’d make it (most notably the hilarious “Chamillionaire Speaks” skit).

Even though he isn’t above making the generic “I’ve got more money than you” tracks, he’s doing it better than everybody else, as his cover of AZ’s “The Format,” “Get Ya Umbrellas Out” proves. And he doesn’t do it for lack of new ideas, he even does a new interpretation of his Grammy Award winning single, “Ridin Dirty,” on “Ridin Overseas.”

“They smell the breeze and you smell like trees
Cause you hit the blunt and hit the purple too
Now the lie is irreversible because you just told ’em we was ridin clean
They question you, but they ain’t question me yet
I’m thinking the police ain’t find a thing
Standing on the side of the freeway, wishin they would just hurry up
And I can see, you walking up to me, like he about to put me up in them cuffs
I turned around and I look at you, and you look away like you feeling sick
I’m going to jail for what I didn’t commit, I must admit, that I hate a snitch”

“Mixtape Messiah 2” isn’t without its flaws, as it does follow the same formula of every Chamillionaire mixtape: take a few new beats, some from hit singles, and rap over them. And he does lose a little momentum near the end. But with only two songs with guest rappers, it’s almost pure Chamillionaire, and combined with the recognizable beats, is easily recommended to any hip hop fan. Funnily enough, a free album released as a Christmas gift for fans is one of the strongest, most inspired efforts of 2006, and guaranteed to keep fans hungry for “Ultimate Victory.”