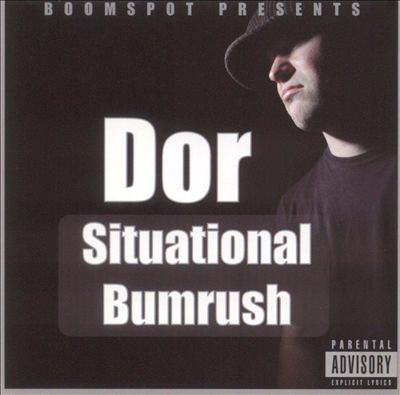 Natural talent is a quality that is widely overlooked in the realm of hip-hop. If you want to sing you actually need to have a singing voice, but if you want to rap you don’t necessarily need to have a rhythmic and melodious voice. Because of this fact you’ll find legions of “rappers” whose voices and style, though while technically rap, don’t sound very good. Dor is one of those people. Know I won’t say Dor is a horrible rapper, as I’ve heard much, much worse, but his voice doesn’t lend itself to rap very well. For the most his voice is monotonous, devoid of any emotion, energy, or melody. I understand that innate musical ability comes to only a few people and that even the most accomplished musician had to learn how to play his or her instrument. Using the analogy of one’s voice as an instrument, it is possible that one day Dor could master his instrument, but as it stands he is but another person trying to rap who just isn’t very good at it.

Few emcees can survive with a monotonous voice. That statement in itself could be too lenient as the only one that comes to my mind is Guru. Guru has managed to overcome his monotonous voice through ill lyrics and precision rhythm. Dor can flow pretty decently as far as rhythm goes, but his boring voice and generic lyrics tend to nullify any decent flow he throws out. There are a few exceptions that actually show the potential Dor has. On “Day to Day” Dor’s heartfelt reflections on his career are full of enough emotion and feeling to get the point across. The Nelly-like sing/rap flow on “Ain’t Nothin’ To It” also works well for Dor, giving his voice a smoother edge. Otherwise, Dor’s voice doesn’t sound well suited for rap, coming off a bit awkward and annoying. There’s really no other way to say it, Dor sounds like almost every other amateur back pack or conscious rapper out there. There’s nothing in his voice, style, or lyrics that really sets him apart. He could definitely improve and work on adding more melody to his voice, but until then he’s nothing specially.

Though Dor is lacking as a rapper, as a producer he’s actually pretty dope. Producing every song on his album is an impressive feat in itself, but to top it off most of the tracks are pretty good. Dor’s production also contains the variety his voice lacks. “Ain’t Nothin’ To It” features a simple, but effective, piano loop and an ill pulsating bass line. “Fantasy” is influenced by Latino-Carribean rhythms and guitars, making for an nice upbeat track. “Get Down” takes a simple approach to beat making, with the drums playing center stage, but comes off with a nice old school vibe. “Day to Day” has a strong neo-soul vibe to it, but it works as well as any song from that genre. The album’s best track production-wise is probably “I’ve Been Thinkin” as Dor flips a vocal sample and ill funk loop for a dope fast-paced song.

So the best that can be said about Dor is that he’s a not so great rapper but a very promising producer. If he works on his rapping style he could improve somewhat in that department, but his best bet is devoting his time to the production aspect of the rap game.