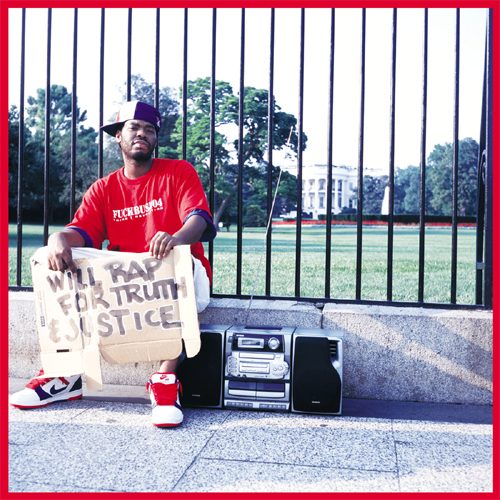 JIHADISREAL :: Will Rap for Truth & Justice

As rap monikers go, JIHADISREAL is one of the more memorable that I have encountered. Regardless of how one might feel about the implications of the name, you’d be crazy not to want at least a taste of his point of view. The keywords of my expectations are fury and controversy. Either way, you gotta love that he can get away with such a title. Only in rap music could someone pull this off.

The accompanying press release explains that “jihad” actually means striving. Though he references “holy war” in the press pack, it is in reference to a struggle more than a war. This is working-class music, and JIHADISREAL is more concerned with relating his personal tribulations than starting shit with anyone. The album cover features the artist sitting outside the gates of the White House, holding a cardboard sign with the title inscribed. The record itself is unrefined, occasionally brilliant, but a definite work in progress. The first song, “Blue Collar,” introduces him as a forceful voice that is unique and commanding, but he is not quite comfortable over the beat. His flow is just not quite consistent and refined enough to be a final product.

Points on the record hint at something potentially great. JIHADISREAL corrects the aforementioned flaws on the gorgeous “Say Love,” a truly heartwarming ode to his mother and grandmother. The beat is mighty fine, and his love for the subjects breathes heavily through his words. He could be accused of trying to tackle too many subjects on this record, but “Say Love” is an amazing example of what he can accomplish.

The artist’s faults on “Will Rap for Truth and Justice” cannot be totally chalked up to lack of practice. The production is scattered and hardly ever compelling. Each beat goes in a different direction from the previous track, and the assembly of such a collection appears to be quite random. JIHADISREAL would likely benefit from a more unified piece of music to rock to, because it would allow him to fall into a groove instead of being forced to stretch his skills over such disparate tempos and sounds.

The message delivered here is strong and important. Its importance lies not in insight provided, or fiery politics, but JIHADISREAL’s honesty. He goes after a plethora of subjects, but he does so in an inconspicuous manner, and since he is content discussing his views rather than forcing them upon us, he is much more listenable and trustworthy. Hardly any of the material is overtly political. The excellent “State of the Union” featuring Head-Roc and Noyeek and a few other tracks provide sentiments worthy of political debate, but the “Truth and Justice” is of a much more personal nature. He is a hip-hop purist in the sense that he senses a fading of cultural ideals, but instead of spending an album attacking those he mistrusts, he is giving us his own brand of pure, honest music. This is the noblest path he could have taken.

I usually avoid these words, but I truly believe that JIHADISREAL has great potential that this album doesn’t always reflect. He has the tools and the focus to become much better than this record shows, and he is already speaking like a natural born leader. The production needs to be more united and simply better, and he must work on adhering to the guidance of the beats as well. At times, he sounds like he is rhyming acapella and the music has been added later, and some of his verses feel disconnected from the production. He has proven to me that he will rap for truth and justice, but that is not enough quite yet.