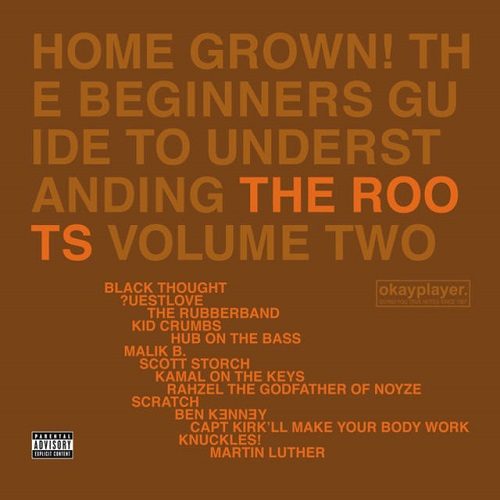 The Roots :: Home Grown! The Beginner’s Guide to Understanding The Roots, Volume Two

Sometimes it’s easy to take reliable artists for granted. Maybe we’re a little disappointed that The Roots never quite lived-up to the success of “Things Fall Apart.” Maybe we’re a little jaded because their studio albums have never quite captured the raw, frenetic energy of their live shows. Whatever the reason, the Home Grown! compilations force us to take a step back and realize how much The Roots have actually accomplished in their long careers.

Rappers Beanie Sigel and Eve, and super producer Scott Storch? They all caught major breaks with The Legendary. Incubus’s guitarist? A former Root. Grammys? As Black Thought once said, “I got a crib with a Grammy and a gat on the shelf.” Jay-Z’s monumental unplugged performance? ?uestlove, Hub and Kamal were there, dutifully shredding their respective instruments. Online community? Consider it launched and a raging success.

The point is, The Roots have done all of this, and a heck of a lot more, and usually without much credit. They’re one of the underground’s favorite sons and have been without wearing the title as a badge of didacticismâ€”nor have they denounced the mainstream. They carried the fledgling banner of alternative rap during a decidedly uncreative era, all the while tipping their caps to their predecessors. Just think: They teamed with Jay-Z, a rapper who, at one point in his career, epitomized the decadence that nearly crippled rap and rendered groups like The Roots an afterthought. But, they never wavered. They’ve transcended semantic boundaries of mainstream and underground, harkening back to the days when rap was just rapâ€”political, gangsta, battle, etc.

Hence, “Home Grown!” This is why songs like “Boom!,” Black Thought’s tribute to his favorite golden era MCs, and the club banger, “Don’t Say Nuthin’ (remix),” can exist on the same compilation. Similarly, there’s an unreleased version of the sexy “Break You Off” and the street anthem “Adrenaline,” which was an early showcase for the aforementioned Sigel.

Thus, you can’t really hate that The Roots released what seems to be two greatest hits discs at a major junction in their careerâ€”that of just recently switching record labels. That being said, we can still marvel at The Roots and their accomplishments and have wished for more (or less, in some cases) on these compilations. Home Grown! Volume 2 is easily more obtuse than Volume 1, perhaps lending credence to the critical argument that The Roots are too square (pun intended) for their own good. Some of the rare and unreleased tracks are rather rough and understandably obscure, perhaps making a diehard Roots fan feel more like a Grateful Dead or Phish fan. If the intention of this compilation is to help a beginner understand a group that is quite often misunderstood, then it pretty much fails in that regard. The safer bet would be to listen to an official Roots album in its entirety, or even the first installment in the Home Grown! series. Nonetheless, it’s a fond reminder of everything that is The Roots’ past and present, especially for those who have heard the original versions of these remakes and rough cuts, as well as for the couple of unreleased tracks.