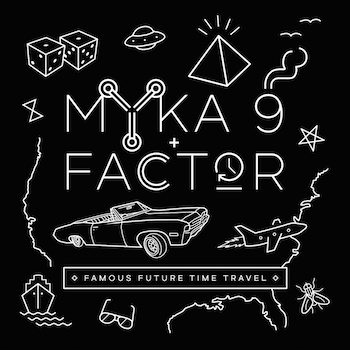 This is not the first collaboration between two hip-hop iconoclasts – unorthodox L.A. emcee Myka 9and Canadian sensation Factor. I’ve described them in the past as a well met tandem (“Myka 9 is better with Factor than without”) and their new album “Famous Future Time Travel” fits that mold. Myka thinks nothing of flipping up his flow in the middle of a verse, let alone a song, meaning he can go from triple-timed syllables to singing to A-B-A-B bars in a heartbeat. It takes a creative producer to match the lyrical ambidexterity of Myka 9’s style, and Factor is well up to the task.

Myka changes up the style of song as often as he changes up his style IN a song. He’s known for collaborating with The Wailers Band and that comes across in his patois flow and singing on “High Post.” He’s also singing at times on “Skyscraper” but there’s no Jamaican influence to it other than “getting higher” with a metaphorical lady (or plant) – the machine gun lyrics actually serving as the chorus linking the verses together instead of vice versa. (We did mention Myka is unconventional, yes?) He peels back the layers of himself on the track “Years” (even opening up that his government name is “Mike, Troy”) and then disguises himself as a street hustler on “Transpo” with lines like “Lip game like a motherf#%@er, pick your thick brain/when shipments came, I was bustin out bricks like Rick James/f#%! yo’ couch.”

I must apologize in advance to our readers for not having more audio clips from “Famous Future Time Travel” to feature. The audio I’m currently listening to is an advance copy from a private soundset, which I’m unable to embed or share even though I’d like you to get a better taste of the highly original styles that Factor and Myke are combining here. It’s safe to say no two songs are like each other except in one respect – Myka’s versatility and Factor’s ability to match it at each turn. It’s almost like watching well synchronized circus acrobats – no matter how many daring flips they take they still catch each other and make it look effortless in the process.

This is a collaboration that has grown and improved over time, and both of them show it on tracks like “Coastal” featuring Paranoid Castle. Though the latter’s pimptastic delivery is definitely fitting on the song, it’s no substitute for the natural chemistry you can feel when Myka flows to Factor. It’s a song of sharp percussive notes that stab through the beat, then quickly repeat, and a melody that feels like an ocean breeze that’s just lingering in the air and refreshing you as you dig your toes into the sand. Factor makes mood music that you can lay in the cut and absorb, and 9 delivers the “Cityscape” in his words as he puts you in a Cali state of mind that’s relaxed and musical while at the same time “escaping the city lights and madness.” I’ll go as far as to say it’s their best work together to date.