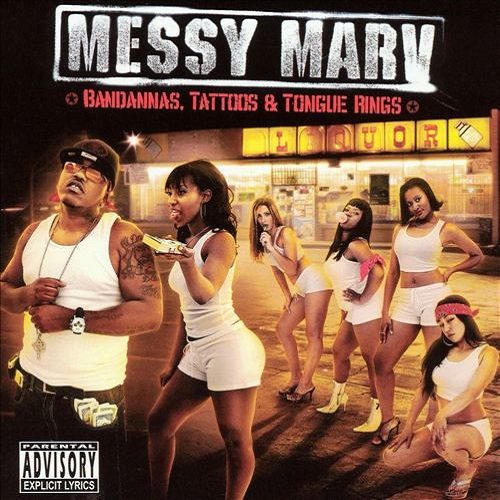 Getting to hear only a couple of releases per year, in terms of Bay Area rap I am like that casual rap consumer who has some 50 Cent and some Kanye West in his CD collection. So while I automatically argue from a weak position when reviewing anything Bayish, I’d still like to give it a shot in this particular case, if only because I’ve been familiar with Marv since he first got himself into “Messy Situationz” in 1996. Ten years ago I was well aware of the amount of rap releases put out in the Bay Area because I bought a substantial amount of them myself. It was the time when E-40 went national with Jive, when Young Black Brotha partnered with Atlantic, when the Luniz scored an international hit with “I Got 5 On It,” when Richie Rich was on Def Jam. The industry’s focus may have shifted down south since, but that didn’t prevent the traditionally self-sufficient market from generating more output than even the most avid follower could possibly keep up with. But if a task seems too big, break it down into small, manageable steps. Like reviewing this album, which, although already being out for some time, deserves our attention because it comes from a ten year veteran.

Marvin Watson Jr. has come a long way in these ten years, and you can bet that just as “Bandannas, Tattoos & Tongue Rings” approaches its first anniversary this coming February, the San Francisco rapper is already gearing up to release a follow-up. Coincidentally, a fellow rappper who has just been in the news is targeted by Marv on his 2005 album. Obie Trice, who was shot in Detroit earlier this month, is first addressed in the _Mobsters_-mimicking intro, then on the song “Let it B Known,” where Marv quips, “I heard your album went gold / but the white boy bought every copy you sold,” adding a threat that in light of the recent events could lead you to believe that once again a petty beef took a turn for the worst: “You need protection, label me a lethal weapon / makin’ niggas die, givin’ my young hitters directions.” Let me make it clear that I do not believe these two things to be related in any shape, form or fashion. Nevertheless, “Let it B Known” is another sadly irresponsible diss track resorting to violence.

On the other hand, there’s a lesson to be learned here for outsiders. If you go west and think you have to crack gay jokes about San Francisco (as Obie apparently did on a Fresno radio station), you’re either purposely looking for trouble or you are completely ignorant of the type of rap favored in the streets of Fillmore, San Francisco. When a rapper like Messy Marv talks about “it’ll be funk on sight,” he’s probably not talking about music. His voice gives him away, a tempered growl heavy with defiance and arrogance. And if you fail to hear that attitude in his vocal tone, there’s always the lyrics to give you a clue:

“It is what it is, mayne, you niggas is soft
that’s how you fuck around and get your head knocked off
I got a Rover and a ‘Rari parked off in the slums
Little nigga, watch your mouth runnin’ your gums
Click Clack Gang, yeah nigga, what it do
You broke cocksuckers gon’ do what to who?
How you gon’ war when your money ain’t long?
with them little-ass pistols, bitch nigga, you’re wrong
We runnin’ the murder rate, little cousin, you know that
My con got a body, the Mac-11 throwback
I fly in to Rap City and fly back to the set
where we kill for the block and die for respect”

Needless to say, Messy Marv represents a very specific and at the same time highly familiar breed of rappers. He lives a fast life on his records. He can’t seem to write a song without including some type of threat. To him, there are three types of women – his mother, love interests he addresses with “ma” – and bitches. But while he proudly raps, “I’m cut from the cloth of the game,” Messy Marv is not replaceable with just any ice-rocking, ice-grilling rapper. He’s certainly not part of the new wave of drug peddlers, coming up in an era (the mid-’90s) when the multi-dimensional thug first was conceived. He can get his pimp on with Suga Free on the uptempo funk romp “Sexy Thang,” he can play the role of apologetic son, pleading, “Mama, we starvin’ / was I supposed to leave it up to big Marvin?” on “Momma,” and he can surprise everyone by teaming up with Brooklyn’s revolutionary gangstas dead prez on the Sean T-produced “U Ain’t the Only 1”:

“I know your back against the wall, baby
I know you probably think me and my niggas all shady
Is it because you see us standin’ on a black top
blowin’ this weed in the air, pumpin’ this crack rock?
This shit real, ma, it ain’t no work for a felon
the only work I put in is with this Mac-11
That’s how they want it, though, they’ll let a nigga die
They rather give a nigga life than let a nigga fly
This shit genocide
And though I play my part too, this is where they put me
I’m a product of thug livin’, this where it took me
Livin’ my life on the edge
gettin’ this money with niggas runnin’ from the feds
They want us dead
This life we live, nigga, is suicidal
but my nigga, I’m hungry, it’s a part of survival
We been po’, it’s hard just bein’ that
but harder than that, nigga, is bein’ black”

For rap that is often branded as being stereotypical, “Bandannas, Tattoos & Tongue Rings” is probably more diverse than whatever is promoted as the next shit. In Mess’ own words, “It’s a real nigga up under these rocks and this chain.” There’s plenty to enjoy here, from the Droop-E-laced club smash “Get on My Hype,” to the Lil’ Flip collabo “Still Ballin’,” to “Neva B Right,” where Mess and guests E-40 and Yukmouth engange in the old 68-and-I-owe-you-1 routine over an interpolation of Father MC’s “Treat Them Like They Want to Be Treated” (which is ironic in more ways than one – “69” anyone?) There’s even an instrumental “Mac Dre & The Mac Tribute,” where Messcalen gives up some Bay love to the two deceased Vallejo pioneers.

Not surprisingly, Messy Marv doesn’t always plead his case in the most clear and concise manner. Why take shots at another rapper (in this case The Game) with the title of your album without explaining yourself anywhere inside? Why tailor a song for airplay (“Wanna B Yours”), only to ruin it all with a sexually explicit mid-way interlude? Why take shots at G-Unit when on “I’m Too Thowed” you’re singing 50 Cent style and on “Get on My Hype” you’re echoing their “I teach you how to stunt” slogan? It’s common knowledge that almost every mainstream rapper out today took a page from the book of Bay Area slanguage and synth beats, and anyone who tries to make us forget about that (such as The Game, apparently) should be called out. But there’s gotta be a middle ground between parodies and death threats, and Messy Marv seems not to have found that happy medium yet. That’s why it’s hard to tell whether “That Thurr” is, among other things, also a jab at Chingy and company. Good then, that “Bandannas…” has its carefree moments, like “Don’t You Say That” an infectious old school electro jam that puts a restraining order on any local wino approaching Mess’ kids with bad breath.

Ultimately, it indeed is what it is. Those who shook their heads at Kurupt’s “You more of a bitch than a bitch” line, have twice the reason to frown at Marv for biting that same line when referring to Obie. Those quick to spot a hypocrite will question Mess’ own willingness to “ride for a cause” when one and a half socially conscious songs face a dozen that are more on the socially ignorant side. Those who are proudly ignorant themselves or have learned to mediate between music and message will be able to appreciate Tron Treez’ impressive one-man show on production and Messy Marv’s respectable “caliber of thuggin’,” but they might also demand a little bit more originality and clarity here and there.