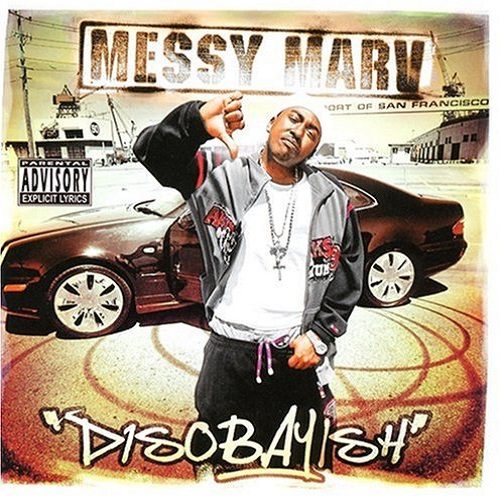 If California were its own country, it would be the world’s fifth largest economy. Think about that for a second, and it’s just crazy. There’s a tremendous amount of wealth in California, and we’re not talking the gold rush of 1849 here. The reference here is not coincidental though, as San Francisco newspapers had been printing news of the dicovery up to a year before everybody else caught on and the rest of the nation beat feet to reach Northern California. Over 150 years later, the same could be said of the NorCal rap scene – artists who are well known and well publicized locally don’t “catch a fever” until somebody at points East puts the word out to the nation. Of course the difference today is that most NorCal rappers couldn’t give a FUCK less if they get that recognition. Remember that aforementioned phrase “world’s fifth largest economy?” In plain and simple terms that means even a rapper almost never mentioned outside his hometown of San Francisco can still do as well for his whole career financially as a rapper from anywhere else in the country who is publicized nationally. There’s no pressure to promote outside California, or in many cases the cities that form the bay area itself. If you’re gold there, why would you care if anybody else ever caught on?

It’s more odd which rappers don’t break in Cali and go national than which ones do. Take San Francisco’s own Messy Marv for example, as true a definition of the “hometown hero” as the bay area can get. You may not be hip to the name, but since 1996 he’s been handling “Messy Situationz” as well as recording joint albums with local favorites like San Quinn and Marvaless. Looking around the bay at his contemporaries, from Oakland’s own Too $hort to Vallejo’s big baller E-40, there’s nothing that should prevent him from being just as well known as they are. In fact both are guests on his new album “Disobayish,” and yes Marv is showing loyalty to his turf by underlining the word “bay” on the album’s title. What’s even more telling is the back cover, where Marv sports a mean mug, some bling bling jewelry (a big watch on his left and a big ring on his right) and two of the most pronounced middle fingers ever raised since Steve Austin left the world of wrestling. Translation? This is by the bay, for the bay, and if you don’t like it then FUCK YOU.

In fact, the sole reason I posess this CD for review right now is because I just got back from a vacation last week in San Jose, California. Yeah you’d like to think record labels would comp RapReviews.com some of that hella fresh West coast shit, but the sad fact is that they don’t. It’s ironic but there again the whole “world’s fifth largest economy” thing comes into play – California can afford to say “fuck all y’all” like Ice Cube and get it done on their own. If you’re looking for a point to this otherwise meaningless paragraph, it means you can expect more West coast reviews for at least the next month or so until my stash runs out – Bad Azz, Mac Dre, Spice 1 and more. How often am I going to get out to Cali anyway? I stocked up. The bottom line is that when you complain that RapReviews.com doesn’t cover enough West coast rap, it’s not that we don’t want to – the record labels out there just don’t give a shit. Like Marv, if it ain’t by Cali for Cali, fuck you. I hope some open minded record execs will realize we like twonk just as much living East of the San Andreas Fault as they do. E-40 and Too $hort already proved there’s a market for it, so more California rap labels should exploit it. The South knows it – after all you can even buy the “screwed & chopped” versions of Juvenile and Paul Wall in Omaha, Nebraska.

Back to the point here, and that’s Messy Marv with his hometown pride and cocksure attitude. How cocky is Marv? Let me put it down for you like this. How many of y’all remember the skit on 50 Cent’s album at the end of “Back Down” where Ja Rule is portrayed as a homosexual? Okay. Now keep that in mind as you read the words from this skit found in opening track “Baby Bintro”:

“(50 who?) Okay, oh, NO HE DIDN’T say anything about 50, okay?
Like, 50 is my boo, okay?
Like, 25 cent plus 25 cent ain’t never hurt nobody
And y’all know, tight things come in small packages – SWALLOW!
Now everything was cool until my boo
50 Cent, got a restraining order on {*censored*}
And then sat his FOINE buff ass on BET and dry-snitched on everybody
They betta not put they hands on my baby daddy 50 Cent
Cause they don’t know me, okay!
I’m a undisputed, featherweight, gay wrestling champion of the world!
Okay? G-G-G-Unit! G-G-G-Unit!”

Marv is taking it to the next level dissing 50 by rewriting his own skit dissing Ja Rule into a skit dissing HIM. I’m not sure what the origins of the beef between the two are, but if anybody outside of California is paying attention this takes “East coast/West coast beef” to a whole new level. As for Marv himself, he’s as grimy as they come. Even on a smoothed out Rick Rock track like “Hypnotic” the gravelly voiced Marv is spitting attitude straight San Fran style. With the subject matter and a singer name Missippi on the hook this could be a crossover track, but Messy Marv is so damn gully it’s hard to imagine anyone cleaning this up:

“It tastes good don’t it? Fuck you up, won’t it?
This might sound funny but baby, got some money on it?
It get the women LOOSE, make ’em tell the TRUTH
Some mix it with the Remy, we chase it with Grey Goose
She asked me where they sell it, but now I ain’t tellin
{*Apu voice*} I just know that they don’t have it at 7/11!”

This might be the best ode to pervin out of the West since Ant Banks did a track of the same name, or The Click rapped about “Hurricane.” Needless to say Marv’s subject matter on “Disobayish” is far from PG, and that’s if skits like “Dick Head” and “Chicken Head Hoes” didn’t already make the point when you read the tracklisting. The topic matter is presented with a gang of attitude, but what might surprise newcomers to Marv is that it’s not laced with an excess of needless violence or mafioso posturing. Basically Messy Marv likes to floss and live it up, just like so many of the South’s finest do. Those already familiar with the Third Coast’s sound and topics will no doubt relate to sings like “Blades” featuring D’Wayne Wiggins (formerly of Tony Toni TonÃ©) and Billy Cook:

“I get high as I could, I put that on the hood
Got the stuff in my cup, but bitch it’s all good
I ride with the strap, on hundred spoke backs
I’m tryin to hit the club, cause I know it’s gon’ crack
Niggaz in Caprices, and SS Impalas
Paper cuts, on my fingers, tryin to count a million dollars
I’m playin by the rules and a bitch gon’ choose
I’m ridin through the parkin lot with blades on my shoes”

The songs and styles cover all the bases. The Kream Team’s work on “Baby” gives Marv some shit to flow on that’s as smooth as Devin the Dude, and Missippi’s chorus could make this a hit a la Baby Bash and Frankie J on “Suga Suga.” For some more rugged singing though check out “Oh No Pt. 2,” produced by DJ Darryl and featuring Nate Dogg showing some 2-1-3 love to the bay. The tracks throughout show a heavy West coast influence, but wouldn’t be unrecognizable to anybody who’s a fan of big bass bump or Southern crunk. Kream Team even does a damn good knockoff of Lil Jon’s sound on “Like What! (Bad Boppas in the Club).” If you’ve heard anybody else from the Cali scene and thought they were aight, you ought to be checking for Marv – he may be San Francisco’s best kept secret. He shouldn’t be, but like the saying goes, real recognizes real. Marv’s topic matter is definitenly Messy, but he’s all about having fun. Clocking in at just over sixty minutes long and coming packed with a bonus DVD, Messy Marv’s “Disobayish” might not be the easiest album to find outside of California but it’s worth the effort. Go get “Disobayish” and put yo’ middle fingers up to anybody who’s hatin!