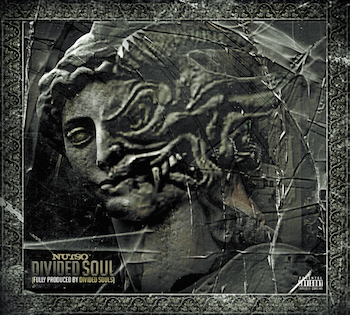 I offer the following disclaimer to open the review – I can’t confirm if the Nutso that I’m reviewing here is the same one that Grant Jones dogged hard on his “In the Cut” review back in 2013. I suspect that it might be, but from the embedded clip in Grant’s review, the artist he featured sounds different from the one on the “Divided Soul” EP I’m listening to right now. No – this Nutso reminds me of the one we’ve been sent miscellaneous tracks of over the last year or so -like this joint with Sadat X. It’s also possible that he’s the same and his voice has just been aging.

I really can’t call it, but I do know this much – I’m not hearing the same rapper that Jones described as “no character, few hot lines and even fewer examples of dope rhyming.” That doesn’t fit the emcee that I hear on the opening track “Unda Ground,” who sounds pissed off and provoked. “Break at night, doin music, bout to lose my lady yo/Poverty’s a bitch man, middle finger up!/To Bloomberg and them white collar crooks, I’m on a Riker’s bus.” This is a hungry emcee looking to get his slice of the American pie, unhappy with his lot in life, using a Divided Souls Ententertainment/DJ Pain 1 beat to express all the stress that he feels.

On the other hand one thing that Jones said in his review rings true on the “Divided Soul” EP whether they are the same man or not – there’s an abundance of guest stars on what’s only a seven song release – seven of them in fact. The only song where Nutso gets to shine completely on his own is “Block Boy,” which seems nice enough at first as Nut gets his nut off over a symphonic loop, but eventually wears off and feels like a song where all parties involved were just going through the motions. “I love the game, love my block, love baggin up/And keep a chopper in the trunk in case you actin up.” In the end it’s just a generic story about being a street pharmacist. “White powder on my fingertips, my pockets on swoll.”

Despite the fact that Nutso tends to default to “I’m doing dirt, I’ve got bills to pay, I feel no remorse about how I do it” as a theme, there’s still value to be found in “Divided Soul” and all of the aforementioned guests do add some of it. The underrated and slept on smoky Texas flow ofTrae Tha Truth is a joy on the soulful loops of “Hustler’s Spirit.” “Make It Hot” has cuts from DJ SupaDave, and the fact he’s cutting up Biggie lines makes all the difference here. I’d be remiss to not mention “Str8 Talk” as well, which has the East coast grimy feel of a CNN track, with cameo appearances by Blacastan and Steele (of Smif-N-Wessun fame).

“Divided Soul” leaves me a lot like its title – divided about how I feel about Nutso. My ultimate conclusion is that there’s more to the man than I’m getting the chance to see or hear here, but that the short EP format and the large number of guests are getting in the way of his personality truly shining through. The brief glimpses I get are at times intrigiung, and at other times make me think he’s just another East coast rapper with the same tale of woe and crack sales as a thousand others. I can’t call it here, but I won’t call it terrible – just occasionally a little underwhelming.