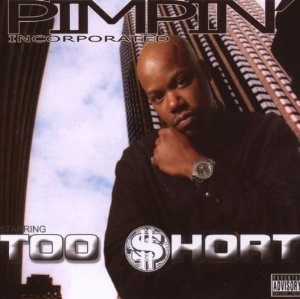 It’s been a few years since Too $hort’s last album and while “Pimpin’ Incorporated” isn’t $hort Dog’s latest full length, it does serve to hold Too $hort fans over until “Up All Nite” drops on Jive later this year. From the jewel case packaging “Pimpin’ Incorporated” does look like an album, but the cover proclaims it comes with a “Bonus Mix CD.” Turns out that the mix CD is considered a bonus because “Pimpin’ Incorporated” is meant to be the first of a series of DVD releases on Too $hort’s latest independent company, Up All Nite Music. Obviously the folks at Up All Nite still have a long way to go before they master the game of publicity as not only is the packaging ambiguous as to what is contained inside but the label also missed their original release date deadline. Missing a deadline for a release is common in rap, but what confounds that error was the fact that the week “Pimpin’ Incorporated” was supposed to drop it was a featured release at powerhouse retailer Best Buy. In the end it might have been a blessing in disguise that the release missed out on national hype as “Pimpin’ Incorporated” is a disappointing release from the game’s foremost pimp.

The DVD’s theme is Too $hort presenting the realness of the pimping game to fans through interviews and documentary style footage. If such a proposition reeks of violating the old street credo that claims “the game is to be sold, not to be told,” worry not as Too $hort ultimately does very little telling or teaching on pimping or any other subject matter. First the DVD portion of the release is extremely short, clocking in at a little over forty minutes. Those forty minutes are divided roughly between an intoxicated Too $hort babbling on random topics about women, strip clubs, and other elements of the pimping game and footage of random strippers and other people acting a fool. For those expecting an x-rated peep show, you have to go get your kicks elsewhere as $hort surprisingly includes very little footage of strippers at work. While I commend $hort for not trying to sell sex literally, unfortunately the documentary offers very little substance regardless of the footage. $hort’s interviews are confusing and at odds with the common knowledge that Too $hort himself was never a pimp, merely a rapper who chose the pimping lifestyle to portray on record. His words are also filled with contradictions as he makes fun of people, laughing as he says “niggas be falling in love with strippers,” and then admits “exotic dancers have held important places in my life.” The people other than $hort on the CD are equally inebriated and act like fools playing up for the camera. Over five minutes of the DVD feature a drunk and rowdy woman proclaiming she’s a pimp and yelling out expletives uncontrollably.

“Pimpin’ Incorporated’s” redeeming quality is the mix CD packaged with the DVD which features plenty of fresh Too $hort songs, both old and new. The CD focuses exclusively on pimping, more so than any other previous Too $hort CD, but enough of the songs are fresh enough to make up for the repetitive subject matter. Highlights include an older and obscure track featuring UGK and 50 Cent. “I’m A Pimp” features what is arguably 50’s worse verse ever, but it is interesting because it shows the emcee before he was ever shot through the jaw and with a voice and flow eerily similar to Tony Yayo’s current style. Mobb Deep puts a distinct east coast twist on pimping on “Keep It Real Hoe” as they come as grimey as ever over a dope beat. Erick Sermon is in top form as he drops a funk beat on “Buy U Some 2” and even contributes a decent, though unbelievable, verse for the track. $hort himself showcases his transition to pimp-crunk as many of the tracks have an ATL feel to them, with rowdy hooks over bass-heavy beats. As with any mix CD there are low points, such as Chyna White’s horrible contribution to “Six Figga Niggas,” but overall the mix CD is definitely worth peeping.

If you can get “Pimpin’ Incorporated” for the price of a mixtape then it is well worth the investment, as the Mix CD is the only thing you are likely to play more than once. Not only does the mixtape offer decent $hort Dog tracks, it also gives out enticing info on his upcoming solo, such as the fact that the production duties will be shared equally by Lil’ Jon and Jazze Pha. The DVD portion of “Pimpin’ Incorporated” is worthless even to the biggest Too $hort fan. The release comes off as a home video that Too $hort would have a hard time convincing family and friends to watch. Overall, the package is an ambitious project and it is good to see one of the game’s biggest players going back to the independent game, but $hort needs to step up his game so his releases reflect his veteran status in the game.