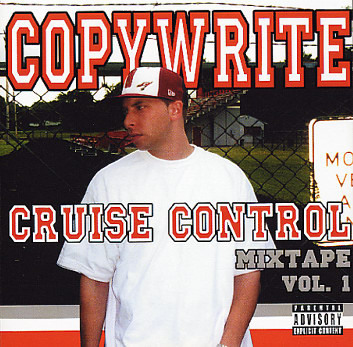 Columbus, Ohio native Copywrite has been the founder or a founding member of several famed indie rap groups from MegaHertz with the late Camu Tao to The Weathermen. Either because of his ego or his level of talent (or both) Copywrite has always found in the end he is better served as a soloist, with his most famed release to date being 2002’s “The High Exhaulted” on Eastern Conference Records. Stylistically Copywrite is a punchline rap battler, a Midwest style Canibus, best served when he either has a great original beat to write to or a great enemy (perceived or real) to attack. Speaking of the latter, Copywrite has recently injected himself back into hip-hop headlines by coming out with diss tracks about Asher Roth, specifically referring to him as “The Real Fake Shady” mocking a rapper he feels is little more than a “copycat Eminem.”

Unfortunately for the man born Peter William Nelson, Copywrite albums can be hard to find and even harder to acquire. After several repeated requests by a loyal RapReviews.com reader, I managed to track down “Cruise Control Vol. 1” through an Amazon reseller so that we could have more than one of his projects reviewed on the website. Said reader may have given up hope though, because less than a week after I finally got the album in the mail, I packed up the still shrinkwrapped album for a trip to Texas with plans to review it once I hit the hotel. That was three months ago, because I managed to misplace the album when we got there, and my wife only found it a few days ago.OUCH. For what it’s worth though this album didn’t get any newer in the intervening time, as it was over five years old whether reviewed then or now. As I said, Copywrite albums can be hard to acquire. “Cruise Control Vol. 1” was the most recent full length release I could get.

“Full length release” may be a bit inaccurate though. “Cruise Control Vol. 1” is actually a mixtape, and Copywrite notes as much on the front cover of the album although the same disclaimer is not on the binding. Still it appears this CD was official enough to be professionally printed and distributed, and the tracklisting even pops up to download to your PC when using Windows Media Player or iTunes. Perhaps it’s better to say this is an “official” Copywrite album, even though some of the beats on the album are not original. Again to Copywrite’s credit it’s not as though he is trying to disguise this fact, labeling songs “Kick Down the Door (Freestyle)” and “Thieve’s World” to make it clear what the original source was. Historians will no doubt take note of the fact Copywrite has crossed paths with several late greats of hip-hop, as Camu Tao shares the R.I.P. list with J Dilla, who produced three tracks on this album including “Alright”:

“I’m Pepe LePew to you, got a lot of the stink
Threw up blue, but I’m no crip, too much Hypnotiq to drink
Too much booze but I won’t quit until I vomit in the sink
These hypochondriacs not as hot as they think
Run my boys and I’m gettin them in
Got ink poison it’s drippin from skin get it I’m sick with the pen”

There’s a gift and a curse to “Cruise Control Vol. 1” being a mixtape. On the one hand Copywrite is able to show his versatility as a lyricist over a variety of short tracks with different beats, and he’s also able to give some shine to his own posse of friends from Tage to KingDom and Storm on tracks. The flipside is that with very few original tracks and only six songs longer than four minutes (five of which are freestyles) it’s hard to get a handle on how much potential Copywrite really has to be a rap superstar. Occasionally Copywrite is his own worst enemy, as he can be so focused on punchlines that he’s actually going through the motions, just manufacturing them to fill his bars without due consideration of how original they are or how funny their impact will be. With so much promise and potential the long-awaited “Life and Times of Peter Nelson” may just be the greatest thing since sliced bread given Copywrite has undoubtedly evolved significantly in five years. Right now though his enemy Asher Roth is getting all the shine, and that’s due to “Asleep in the Bread Aisle” having better beats, better guest stars and better punchlines. If Copywrite didn’t evolve during the interim his chances of knocking Roth out of the ballpark are nil.