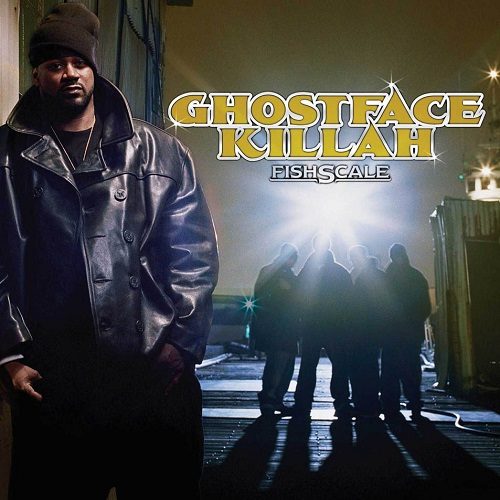 Ghostface Killah is an institution unto himself. While the Wu-Tang Clan has suffered a general decline over the years, for reasons that are their own fault (poor solo albums, lack of unity) and reasons that aren’t (Ol’ Dirty’s untimely demise), Ghost has stayed immensely popular. Any year that Wu affiliated albums are released, the Ghost one tends to be the most anticipated (only GZA even comes close). What’s his secret? Ghost is simply a great rapper, hands down. His voice is very emotional and descriptive, his lyrics are superbly visual narratives on the level of Rakim or G. Rap, and his personality shines through on almost every track. In all fairness the Wu needs Ghostface far more at this point than he needs them, because if nobody else holds up the banner for the crew, he always comes through to carry the weight.

“Fishscale” is no exception to this trend, as Ghost continues his tradition of being the Wu’s most consistant soloist. There are a few other Wu affiliates to be found on the album – Raekwon on “Kilo,” a bunch of Clan fam on “9 Milli Bros” and such, but there’s little doubt this is Ghost’s showcase and that he owns it. The lead single “Back Like That” featuring Ne-Yo doesn’t come in until track 13, but for the purposes of this review skip to it right now if you’re listening on your Discman or iPod. Pay attention to the subtle background snaps, the smooth harmonizing, the beautiful piano keys and the strong chorus breakdowns and thank Xtreme for producing a beautiful track. Then peep the Ghost lyrics closely and realize that combining with Xtreme on this shit results in true cinematic drama.

“Aiyyo, I thought we was iller than that, all them kisses
And love yous, when Jake came, you hid my packs
It was time a brother went to war, vests banged up
Stainin in the kitchen, yo, holdin a four
Sweatin and breathin, bounced out of town for a weekend
Heard you had homey in the passenger seating
Honey, look, I’m a monster don, I do monster things
That’s why I put your ass under my arm
Messing with him can bring bodily harm
And where you gonna hide in the streets when the body is gone
If it’s one thing I learned that, never trust a female
On no scale, you just confirmed that
Bounce to your momma house, pack your shit
I don’t care if you crying, youse a ruthless chick”

Dizamn, shawty played Ghost foul! That’s Ghostface for you – he makes beautiful songs about ugly incidents. On “The Champ” he comes with straight kingpin shit over a fantastic Just Blaze beat while telling foes “you’re burnin up like David Koresh.” The late great J Dilla blesses Ghost on “Whip You with a Strap” on a track that comes off like the long lost sequel to “All That I Got is You,” and indeed Ghost gets his butt whipped by momma and raps vividly about being a bad little kid. Ken Lewis comes correct on “Big Girl” with some smooth old school soul, a popular refrain on Ghostface albums. For anybody who misunderstood Ghost as a misogynist over the years, this song is a whole new perspective:

“Word life, put you to school when the clubs’ll stop
College girl, pay for your books at 200 a pop
And all I ask in life’s for you to be careful
Stay focused, take care of your health
Have kids and marry a prince
Good luck and happiness
And no longer shut yourself in, taste the pain, the sorrow
The sun’ll shine and still come out tomorrow”

The only major complaint I have about “Fishscale” after listening to it are that there are just too damn many skits. This isn’t always a bad thing, especially if they’re as clever and closely connected to the album’s theme as they were on “Ironman,” but these don’t seem to enhance or detract from the presentation – they’re just there. Otherwise “Fishscale” falls right into line as another classic album from the man who has consistantly brought heat for 10 years and 2 different labels.