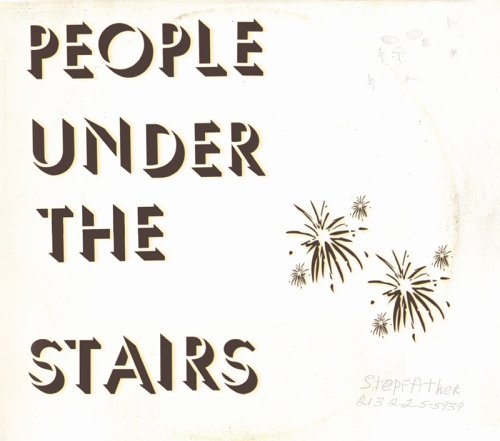 People Under The Stairs :: Stepfather

The People Under The Stairs have been sitting on the bottom steps of the West Coast hip-hop cellar for a minute now. With an exuberant love for jazzy loops, funky breaks and mellow samples rappers/producers/mixers Thes One and Double K have created a sound for themselves that is both recognizable and enjoyable. When I think of P.U.T.S., I think of lazy afternoon sunshine, cold beers and beautiful women.

That’s why it is quite a shock to hear these Los Angeles-based fun preachers stray from their own trademark sound so violently. At least, that’s the idea you get when you listen to the first couple of songs on their fourth long player “Stepfather.” After a vintage intro, the duo starts off with a steroid beat backed up by a neurotic organ sample. “Step In” isn’t exactly my cup of tea and in my opinion it isn’t the artists’ either. Thes One and Double K sound out of place on the opening track. The next composition, “Pass the 40,” sounds similar to a (weaker) version of the club hit “Drop it Like it’s Hot” with courtesy of Pharell and Snoop. The Doggfather and P.U.T.S both hail from the West Coast, but they are better off staying away from each other’s music. The mechanical sounding bass beat is stripped of all the warmth that normally surrounds any ‘staircase shade production.’ It made me want to skip the track instantly because of that.

Any reader might come to the conclusion by now that I don’t exactly like this album. Wrong! Although the first tracks do not exactly appeal to me, most of the other rhythm experiments on “Stepfather” are quite to my liking. According to the press release, Double K and Thes One believe “Stepfather” to be their most progressive and experimental album by far. If you listen carefully, you’ll find reggae, disco, the occasional jazz solos and some sparkles of P-Funk. They even got P-Funk Godfather George Clinton to do some work on “Stepfather,” but the purpose of “The Doctor and the Kidd” is beyond me.

The ‘People’ make no secret of the fact they are huge fans of heroes of the past. They constantly drop small hints and references to people like James Brown, Funkadelic and Jimmy Castor. The best example of their tributes might be the funky “Tuxedo Rap.” Not only do the People use rhyme schemes and lyrics The Sugarhill Gang would have nodded their head to, but Thes One and Double K decided to give praise to the disco era a bit more by sampling Michael Jackson’s dancefloor hit “Don’t Stop Till You Get Enough.” The result is a slightly abstract, but very entertaining song that I found myself playing over and over.

Lyrically, People Under The Stairs never let you experience a dull moment on this album. Their wordplay is original and funny, their rhymes blend in together perfectly, and their choice of topics are sometimes recognizable, but sometimes just plain bizarre. If you dedicate an entire song (“Eat Street”) to your favourite types of food and where to get those at, you must be loving your munchies. The use of the looped word “Eat,” that can be originally found on the Canibus track “Second Round K.O.,” is both hilarious and clever. The word in that song was originally used by Mike Tyson to explain what he was going to do to wack MC’s instead of cheeseburgers.

“So homie, no time to chill
We got places to try
I gotta find some grilled onions
And a large side of fries
Some guys are mad smart
Some guys are tough dudes
But me and me homies
We mostly care about food”

More food on the two-part-anthem “Jamboree Pt.1” and “Jamboree Pt.2.” Thes and Double have a summer barbecue and decide to show off their narrative skills talking about it. Everybody can relate to having a great party with friends, chasing after some girls and reminiscing of the good ol’ times. Because the two parts show the ignition (Pt.1) and the aftermath (Pt.2) of the party, the beats have been adjusted accordingly to put you in the correct mood for each song.

There is also a bit more seriousness to be found on this record. Thes One and Double K decided to dig into their own family life and give their audience an idea of what their childhood was like. A sometimes grim portrait that sounds authentic enough to show where these MC’s came from.

Although the start of “Stepfather” made me jump out of the lazy seat I set up for listening, the remainder of the album made me sink back in the cushions comfortably. The People Under Stairs are one of the finest representatives of the Bay Area hip-hop scene and this album hasn’t tarnished that reputation for a bit. Summer is coming and I hope there will be a lot of sunshine under all those stairs.