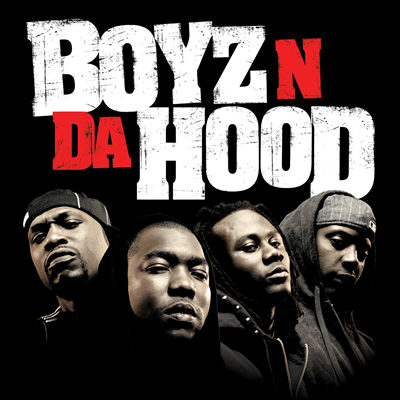 “I can’t lie, I’m still in the club
Poppin bottles with my niggaz, drankin liquor, smokin bud
Shorty what it does, my nigga what it do
Pop a B, bite down, do a line or two
Get drunk (get drunk) do a line (do a line)
Pop a B (pop a B) or bite down (bite down)”

Two years after the release of the self-titled debut from Boyz N Da Hood not a whole lot has changed. In fact the one noteworthy difference between then and now is that Young Jeezy, whose star was already brighter than the group he ostensibly rolled with, moved on to a successful solo career and Def Jam and was replaced by Gorilla Zoe. This may be a recurring pattern from BNDH as Zoe is himself on the rise after appearing on Yung Joc’s “Coffee Shop” and releasing a solo album of his own. The marketing department at Bad Boy clearly doesn’t want you to forget where he’s from though, as the artwork and design for BNDH and Zoe’s new albums are nearly identical – either that or they have a really lazy graphic design team.

Speaking of Yung Joc, the A-T-L rap star shares billing with his fellow A-Town compadres on three songs for “Back Up N Da Chevy.” Aside from that the songs themselves – “Nothing is Promised,” “We Ready” and “Block Boyz” are entirely unremarkable. While label impresario Sean ‘Diddy’ Combs is not going to let an album out the door that isn’t technically sound, Dana ‘Dee Jay Dana’ Ramey produces a sound that is as clean as it is uninspired. In fact of the three songs mentioned above the only one which stands out even a little is the one he didn’t produce, “We Ready,” which was handled by Crown Kingz Productions. Envision a track about guns with a snap beat and guest appearance by Ice Cube – “Choppa’s” will be exactly what you think it is. The BDNH posse exhort listeners to “Say What’s On Your Mind” but have nothing to say worth hearing. Picture stereotypical thug rappers trying to do a quiet storm crossover track and “Table Dance” featuring T-Pain would perfectly fit the bill.

“I’m off in Magic City, chillin, smokin on some sticky
I saw this bitch named Cinnamon, she’s lookin like she’s feelin me
I throw the deuces, po’ some Goose and watch her pop her coochie
She walk like she from Houston with mo’ ass than Massachusetts
She shakin, makin it wobble, like one of them Next Top Models
She left me with no choice but to throw dollar after dollar”

One has to occasionally wonder if thugged out MC’s ever meet girls anywhere but strip clubs any more. Perhaps if they met a nice girl at the library or a REAL coffee shop we wouldn’t be hearing about what conniving bitches, hoes and tramps they all are. It’s amazing how much Big Gee, Jody Breeze, Duke and Gorilla Zoe have to say on “Back Up N Da Chevy” and how little of it means anything.