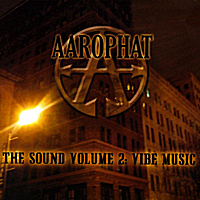 If someone like ‘Soulfather’ Rasco is impressed by your rhyming skills and lets you record a 12″ on his own label Pockets Linted, there must be something special about you. Well over three years after that promising single “Gritty” and its b-side “Darkwind,” the Ohio-based Aarophat resurfaces with “The Sound Volume 2: Vibe Music.” Just as Mobb Deep’s “Shook Ones Pt. 2” skipped the boring first part, and went straight for the sequel, it is unclear what happened to “The Sound Volume 1.”

If you’re gonna start something – even if it is a part II – start it well. Aarophat definitely stuck to that adagio when he starts off the album with the absolute banger “40 Bars.” The horn section is held back by just a heartbeat, which creates a run-walk-run sort of rhythm that matches Aarophat’s mid tempo way of rhyming perfectly. With his low voice he rides this track like King Arthur on horseback, and shows off with battle rhymes that are straight-to-the-point and enjoyable.

With “40 Bars” as proof, Aarophat sounds like an MC that has been in the rap game for a while. The MC from Youngstown has a big man’s tone of voice that is comparable to the hungriness of OutKast affiliate Killer Mike. Whereas Mike sticks to machine gun fire, Aarophat chooses to go with a Desert Eagle way of rhyming. He sounds like a man who takes his craft very seriously, and doesn’t avoid difficult topics like suicide and failed relationships.

Apart from the opening song, the production on “The Sound Volume 2: Vibes Music” is surprisingly mellow. Instead of going for gritty beats that would be the obvious choice for his confident way of rhyming, Aarophat picked out a more mellow sound that is interesting for a couple of songs, but turns into a grey soup after getting halfway across the album. The main reason for that greyness is the lack of variation in the drum department, combined with the clichÃ© pitched soul voices and electronic samples. If the production team want to pursue the ‘rugged soul’ sound, they should listen to James Brown more often.

Aarophat spikes his tracks with lines that fabled MC’s from the golden age of hip-hop once dropped. For example, on “40 Bars” he quotes the revolutionary Chuck D with the line “once again back is the incredible.” Maybe this means that Aarophat pays homage to some of his heroes, but if you use this style a bit too much, it just proves that you lack sufficient rhymes of your own. The clichÃ©s that invade this album on the production tip also creep into Aarophat’s lyrics as the album progresses, like on “Vibe Music”:

Although Aarophat holds his own on the mic from time to time, his choruses are unbearable to listen to. Maybe he likes to remind the listener of what the track was called again, but if one has the professional looking jewel case lying in front of him it isn’t necessary to keep repeating the names. House music groups and beginning indie rockers like to use their song titles as mantras to hide the fact that they have nothing to offer musically, so it isn’t very wise for an artist who is judged by the quality of his lyrics to join these ranks.

It wasn’t very wise of me, but I decided to do a ‘chorus body count’ on the number “The Dancefloor.” Aarophat manages to squeeze in the word ‘dancefloor’ forty (!) times. Taking in account that this song lasts for about four minutes, you do the math. I haven’t been able to get those two syllables out of my head for hours.

Aarophat’s album is a record that has its highs and lows. “40 Bars” is an impressive piece of work, but on the opposite side “The Dancefloor” is a sloppy composition that could have been left off the album. In between these two songs “The Sound Volume 2: Vibes Music” is a decent album, but nothing more than that. Without all those chorus lines, it could have been a lot shorter, too.