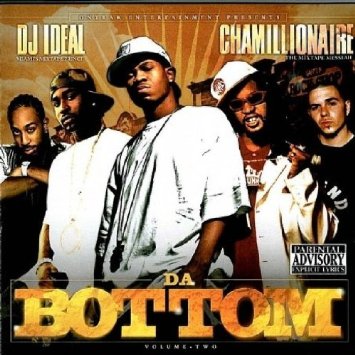 Every area code in the U.S. has a few DJ’s who proclaim themselves the chief representative for all the people living there. In the 3-0-5, sometimes references as Dade County but better known as Miami, DJ Ideal is currently the top contender to their title. Spinning since the age of 15, his impressive resume includes touring with Pitbull, working with the likes of Lil Jon and Joe Budden, and a series of “Da Bottom” mixtapes that are distributed in stores nationally. At last count, that series was up to eight installments, the latest of which is hosted by Paul Wall. This review rolls us back to volume two, where DJ Ideal shares the spotlight with popular Houston rapper Chamillionaire. Why volume two? Well aside from the fact it was released less than a year ago (September 2005) it’s the first DJ Ideal album that caught my eye at the store and made me say “I should find out what DJ Ideal’s all about.”

A large portion of “Da Bottom, Vol. 2” is made up of “exclusive” freestyles, pretty much the standard among mixtapes these days whether sold at the street level or distributed nationally. Our co-host Chamillionaire has several, Pitbull gets two, and a lot of other heads get their 1-2 minutes to shine. I can’t say I’m familiar with names like Cubo, Brisco and L. Money, but I’m sure that like DJ Ideal they are hot shit in the 3-0-5. To be honest though none of them said anything worth quoting – I transcribed their freestyles for this review and then said, “Fuck it.” No “REWIND DAT” punchlines of any kind, no clever barbs aimed at other MC’s, nothing. In fact what might be the most surprisingly tight and vicious freestyle on the whole album comes from Mike Jones. Yes I’m serious. He’s clearly pissed off at Chamillionaire on “Still Talkin Down” and while in all likelihood they included the song just to make fun of him, one wishes Jones would show this kind of fire on his albums instead of repeatedly giving out his cell phone number:

In rebuttal DJ Ideal includes a skit immediately following the song wherein he calls Chamillionaire on the phone to get “the real story” and we’re treated to some more of his well placed thoughts about “Dyke Jones” and how he tried to sabotage his career. If anything it seems to be the other way around, since I’ve heard Chamillionaire talking way more trash about Jones than vice versa, especially when the next track is a “Mike Jones Diss” freestyle with his brother Rasaq that’s actually a five minute long song. I think it’s about time we had a nationally televised PPV where these two take out their grills, put in some mouth guards, throw on the gloves and just scrap. I don’t care if it’s Marquis of Queensbury rules or MMA, just knock a motherfucker out.

When Cham and Jones aren’t airing out their issues in public, there are plenty of other interesting tracks on “Da Bottom, Vol. 2.” Three 6 Mafia and Grandaddy Souf collaborate on the heavy and energetic “Game Room (Florida Classic),” although in truth the song would work just as well or better as an instrumental. That’s not true of Big Tuck and Chamillionaire’s “What’s Up What’s Up,” although it’s ironic that Tuck’s flow is at times a little reminiscent of Mike Jones:

“Haters we ain’t scared of dem
In the club we punish dem
Promise we don’t play with dem
Grab that thang and aim at dem
Ballers, throw yo’ dranks up
Gangsters throw yo’ hoods up
Niggaz hatin, wrap ’em up
Represent, throw it up!”

Other worthwhile tracks include Trick Daddy’s “Jump on the Dick” (although it’s curious he’s working with Khia and not Trina), “Buck Back” by the Ying Yang Twinz, and even though it’s recycled ad nauseum I still enjoyed “Get Your Shine On” by Baby and Lil Wayne being thrown in the mix. The downside is that at 30 tracks “Da Bottom, Vol. 2” seems to drag on a bit even if a lot of them are short. There are some songs which are good for a laugh the first time such as “They Call Me Flip,” a Lil Flip tracks which talks trash on T.I. and not coincidentally follows his song “You Don’t Know Me,” but at some point you also feel DJ Ideal is working really hard to start shit and the rest of the time just coming up with enough filler to create a full album. It’s not obvious how much skill DJ Ideal has as a producer since so many beats and songs are reused, and there’s a minimal amount of cutting and scratching that’s not even as memorable as the last Screw mix you’ve heard. While that may seem overly harsh it’s clear DJ Ideal has a lot of potential and is trusted by Southern artists and his own 3-0-5 community, so “Vol. 2” may just be a stepping stone to greater things; or it’s possible he peaked here and other volumes will be a disappointment. Only time and another random purchase will tell.