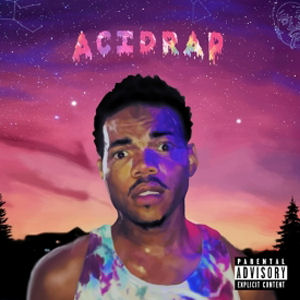 Don’t be fooled by the title of Chance the Rapper’s latest self-released album. While it references drugs, it isn’t a drug album. Like Danny Brown, Chance’s drug use is the least interesting thing about the rapper. Drugs act like a screen for the deeper issues that Chance examines over the course of this album. Also like Danny Brown, Chance has released an amazing album for free.

If you wanted to come up with a pedigree for Chance, it might be something like this: one part fellow Chicagoan Kanye West, to whom he owes his confessional tone; one part Lil Wayne, to whom Chance owes part of his delivery and his adept use of one-liners; one part Frank Ocean, since Chance mixes singing and rapping; one part early Eminem, for the bratty, clever wordplay; and one part Kendrick Lamar, since Chance is from the school of Rappers With Funny Voices. That’s not to say Chance is derivative. It’s more like he takes some of the best aspects of some of the best rappers and integrates it into his own style.

The lyrics on “Acid Rap” are anything but dumb stonerisms. He examines love, mental illness, drug abuse, loneliness, and similar to Kendrick, tries to reconcile being raised in a good home with the pull of the streets. There’s a pervading feeling of nostalgic sadness as Chance looks back at where he came from the viewpoint of a twenty-something who is feeling directionless and lost. This is best expressed in “Cocoa Butter Kisses”:

“Cigarettes on cigarettes
My momma thinks I stank
I got burn holes on my hoodie
All my homies think it’s dank
I miss my cocoa butter kisses
[…]
Put Visine inside my eyes so my grandma will fucking hug me
Yo generation above me
I know you still remember me
My afro looks just like daddy’s
Y’all taught me how to go hunting
BLAM!”

“Everybody’s Something” is a touching song about love with a chorus of “Everybody’s somebody’s everything/I know you’re right/nobody is nothing/That’s right.” It also shows Chance’s cleverness and complexity as a rapper. He’s got tongue-twisters like “Swallow them synonyms like cinnamon Cinnabuns/Keep all those symp-to-mens down to a minimum.” There’s a seriousness to his playfulness, though, as he raps about Chicago in all its dysfunction:

“I slurped too many of pain killers down them an awful lot
I gotta lotta off days but it ain’t often that I’m off the clock
Y’all know wha’ mean?
I got the Chicago blues
We invented rock before the Stones got through
We just aiming back ’cause the cops shot you
Buck buck, bang bang
Yelling ‘Fuck Fox News!'”

Even when Chance is rapping about love, there’s a dark side to it. “Lost” is a love song that is either about a relationship between two screwed-up people, or a screwed-up person’s relationship with drugs. Noname Gypsy is the female half of the couple, coming off just as damaged and confused about everything as Chance:

“Fuck me into open caskets
I want to die with this
I want to stop seeing my psychiatrist
She said ‘pill pop baby girl cause I promise you you’re tweaked
The empty bottled loneliness, this happiness you seek’
The masochism you preach
Practice back flips
Tragic actress
On a movie with no screen
When the only time he loves me is naked in my dreams”

On paper, “Acid Rap” might sound terrible. A guy sing/rapping in a funny voice about a bunch of emo shit? In less talented hands that would be a recipe for disaster. However, Chance has enough heart, humor and skill to keep things from getting too weepy or self-indulgent. He’s also backed by solid production by the J.U.S.T.I.C.E. League, Ceej, Nate Fox, DJ Ozone, Ludwig Gorransen, Brandun Deshay, Nosaj Thing, Jake One, and Blended Babies. The producers keep things soulful but heavy, with solid beats backing Chance every step of the way. Chance also has some well-selected guests, including BJ the Chicago Kid, Childish Gambino, Ab-Soul, Action Bronson, Vic Mensa, and Twista. The album may be released for free, but it is no mixtape. None of these tracks are toss-offs, and the whole project feels as carefully put together and curated as any proper album.

Despite being self-released and having a druggy title, “Acid Rap” is anything but a half-baked toss-off. In fact, it is one of the best albums I’ve heard this year. Chance the Rapper builds on the formula that Kendrick Lamar rode to success last year, offering a lower-key, more introspective take on Kendrick’s confessional half-sung raps. Go get this now.