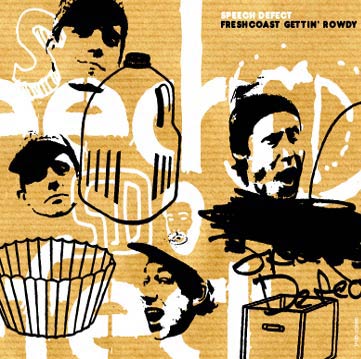 It is debatable (and certainly not for this reviewer to decide) whether hip-hop was something that happened by accident or something waiting to happen. But once it was here, it continued to exist because of two things. One, the reverence for current or past manifestations of the music, and two, the will to innovate and improve on existing achievements. Because of its fast-paced, competitive nature, hip-hop has always championed innovation and improvement, somewhat neglecting the child-like joy that lies in mimicking something that you love, forgetting that the mastership wouldn’t be imaginable without the apprenticeship. Yet there have always been hip-hop heads that weren’t out there risking their limbs at the cutting edge, who were content to just be a part of it.

Even though they are well familiar with rap’s repertoire and regularly address competition, Sweden’s Speech Defect belong to the group of the tagalongs. They can even pride themselves in rhyming in hip-hop’s first language English, another sign that the desire to be part of something was and is strong in rappers Thage, Mr. Linus and Boogie B. (DJ Prao-D completes the line-up.) Growing up in the same street, they found that their mutual interest was music, the collective pursuit of which being initiated in 1995. Orignally recorded for No Cool Music, their full-length debut was released independently, then licensed exclusively to Japan by P-Vine and is now made available to a larger audience by Raw Fusion subsidiary Jugglin’, an aspiring player on the Swedish black music scene (Hearin’ Aid, Up Hygh, Soul Village). “Freshcoast Gettin’ Rowdy” contains material recorded in 2003 and 2004, the latter being the year Speech Defect toured the UK with Ugly Duckling.

From the very start, SD let you know how they intend to get-get on down. Promising “mo’ ‘Wild Styles’ than Charles Ahearn,” they first offer the diagnosis, and then the remedy:

“Rap’s computer-generated
Even Run’s House got renovated
Leroy’s moms passed away
Eric B.’s no longer an artist
[…]
With rhymes and breakbeats
straight back we take it
to the early eighties
and makin’ this become the latest
for the fellas and the ladies
who been sleepin’ for ages
The curse on you is strong, but we’ll break it
and keep comin’ up with hits to see how far we can take it”

How far they can actually take it is indeed a good question. A related question would be what exactly it is that they are trying to revive or keep alive. It can’t be old school hip-hop, because no Afrika Bambaataa or Grandmaster Flash could have performed sets as layered as Speech Defect’s tracks, so whatever machines they are using, if it ain’t strictly two turntables and a mixer, their music is inevitably to some degree “computer-generated.” It could be the late ’80s, but what it is best comparable to is modern age retro chic in the vein of Jurassic 5 or the latest Beastie Boys album, the term ‘Freshcoast’ probably designating not so much a place or time as a state of mind. “Freshcoast Gettin’ Rowdy” is not the shape of music to come, but it is in some ways more adventurous than what passes as hip-hop nowadays. A cornucopia of beats, breaks and loops, it is a treat for all hardcore sampling advocates out there. Check “The Break Seminar Pt. 3,” the 5-minute instrumental collage put together by Linus and Prao-D, and tell me you aren’t curious to hear the previous parts.

Any given song here features several samples of the funk, soul or jazz variety, never reduced to just a straight loop, but partitioned to fit into the quick succession of breaks, quotes, scratches and hooks. The playfulness of the music proves contagious to the rappers, who react to the constant challenge with everything we associate with a lively rap exchange. They’re engaged in a relentless back-and-forth, finishing each other’s sentences, coming up with chants, motivating the crowd, one moment harmonizing like the Fantastic Five, the next weaving more complex, comtemporary rhyme patterns. The chemistry is evident and truth be told, a lot of today’s rap stars would probably be overwhelmed by the lively pace of “Freshcoast Gettin’ Rowdy.”

Nobody’s perfect, though, and Speech Defect show little inclination to rap about anything else than their love for fresh beats and rhymes. Their belated attempt at storytelling takes a turn for the surreal (“Ain’t it Just Like a Hollywood Movie?”), while “Skin Deep” flips one of the most clichÃ©d topics rap has to offer (gold diggers). As exuberant expressions of a love for music, however, most songs here work, mostly because of the finger-lickin’ good beats that leave little to be desired on the part of the rappers: “That’s a nice loop, and it’s a beautiful day.” Really, what more could they ask for?

“Man, do I still love H.E.R.,” Thage exclaims at some point, and it’s obvious that if you ask Speech Defect, the love is still going strong. Maybe the feeling is not perfectly mutual as there are undoubtedly artists to whom hip-hop in its infinite wisdom has afforded more affection in the form of talent. But with the “huge appetite” with which they are “comin’ for the mic out of nowhere like fruit flies,” Speech Defect prove that they just can’t get enough of hip-hop and are out to secure their spot. I mean, they have first dibs on a Mike Smooth reference. That’s what I call ardent love.