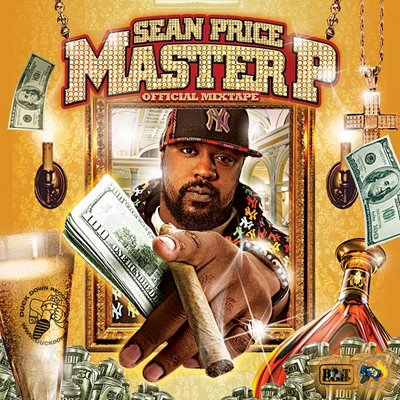 “Sean Price: the brokest rapper. Career barely alive. We can rebuild him.” So says the (ridiculously funny) first track of “Master P.” Here at RapReviews, we weren’t aware he needed rebuilding. Only a few months after his critically acclaimed “Jesus Price Superstar,” Sean Price has had little time or reason to have “updated, (or) upgraded” his sound.

The claim is, for better or worse, a fairly empty one. Sean Price hasn’t changed perceptibly, he (and most likely his fan base) is content with “just” kicking unpredictable, gritty, and witty rhymes over tough beats. The formula sounds anything but stale here, as Price is always a pleasure to listen to, his calm baritone contradicting his hard, off-the-wall lyrics.

Unfortunately, Sean Price isn’t allowed to shine fully on this album. Out of 18 songs, 13 have a “featuring” tag on them. Sean Price, for all that he talks in a monotone, has a quiet charisma to him that makes it hard for another rapper to shine on the same song. For the most part, the guests handle themselves well, with a few standouts (Buckshot and Tek on “BCCC”) balancing out the weaker ones (Diamond D on “Get it Together”). Even so, not one guest outshines the star, and so the listener can’t help but be let down by the massive amount of features.

Similarly, the production works without being anything special. It fits well enough with Price’s style, it won’t ever really move the listener. There isn’t one exciting piece of music to be had here, and while a couple beats have a nice swagger to them, “Master P” comes off muted in sound. This, combined with the sprawling guest list, makes the album something of a drag to listen to.

When Sean Price takes the mic, however, all of these problems are forgotten. He’s consistently on top of his game here, the bizarre boasts on top of complex rhyme schemes on top of impressive start-and-stop deliveries. It’s impossible not to be entertained by a rapper who brags, “I got rhymes up the ass/give me some Exlax.” And while he’s fun, he’s very serious about his craft, the rhymes and lyrics are extremely well-done, and he makes sly nods to his predecessors on “Fish” and “Long Fifth Goodnight.”

Sean Price’s star showing can’t eclipse that half of this album is dedicated to guests who can’t touch him and beats that he probably shouldn’t touch. Again, none of it is especially bad, but it just takes away from the great album that Price is so obviously able to make. Fans would’ve been better served by a thirty minute display of Price verses, but as it is, “Master P” only serves to get fans anticipated for his next album, and newer ears interested in his last.