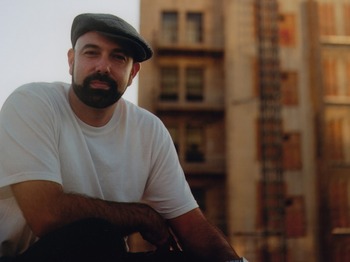 One of the most consistent artists in hip-hop, Jurassic 5 returns with its latest effort, “Feedback”. I chat with the DJ Nu-Mark about the new album, their collaboration with the Mighty Mos, and the situation with Cut Chemist. Plus the debut of the “One Line Random Eleven”, eleven questions asked that you didn’t know you wanted answered.

OL: *laughter* You guys are getting too big, man. You say that like it was nuthin, huh? (more laughter)
NM: It’s hard to keep track of where you played the night before, I don’t know what the hell that means when you’re touring. For some reason, I was just like “What?! Where [was I] last night?” (laughs)

OL: *laughs*
NM: It (Jimmy Kimmel Live) was really good. Any exposure is good exposure, so we’re out there just tryin’ to do tha damn thing. The ones (stops) in Portland and Seattle were really, really good. Their crowds were so fuckin’ loud, I couldn’t even hear my speakers, I couldn’t hear my monitors, man. I had to keep asking my monitoring engineers to keep turning me up. That’s a really good sign when I blow my ears out.

OL: I was out in Chicago last July and you guys did a real quick show in the morning. It was for an Islam awareness festival. It was an outdoor show at a park and it was free [to the public]…
NM: Yeah, I remember that…

OL: ..and I remember you did the Clipse’s “Grindin” beat on, like, a toy. Literally. How do you come up with that kind of stuff?
NM: Well, I’ve been kinda getting tired of conventional scratching, so I just started to think about different things I wanna do. I examine the turntable in a different way, that’s why I do, like, the “rubber band” trick. And making instrumentals out of things that aren’t instruments, you know? It’s fun for me ‘cause this way I know if I’m entertained, I know whatever I’m doing onstage has a better chance of translating to the audience. So I just sit around all day and think about stuff like that. I’ll buy a portable turntable from a carwash, or whatever I see that intrigues me, I’ll grab it and rewire it and bring it onstage and give it a shot.

OL: So a lot of experimentation, right?
NM: A lot, yeah definitely. And a lot of times I’ll get something that’s a really cool toy and I’ll wire it up and it just doesn’t sound good through the speakers and I have to just dump the idea altogether.

OL: Before we get into the new album, I just wanted to (discuss the current trends in hip-hop). You guys are from California, so the big thing that’s come out of there lately is “hyphy”. (It’s been in California a while, but) the nation’s just now starting to pick up on it and I was just curious what you thought about it.
NM: I think it’s cool because I like it when the art grows. Right now the South is the biggest thing, so if the hyphy movement can blow up or even take over, cool. For a while, the scene..it went from New York, then it move to the West Coast, and it was like “What’s next?”, you know? Then the South took over, then the Midwest took over, then the South took over (again). It’s good to see it shift around the map the way it is. It’ll be a universal thing, where everybody has a sound and it’s like, whatever’s cool is the only thing that sells, but that’s what I’d like to see.

OL: What can fans expect from “Feedback”?
NM: Don’t expect anything. That’s the worst ‘cause when you go in with expectations, you’re bound to be let down. That’s what I would say, just go in with an open mind ‘cause every album we put out is different from the one before it. I think once people get too attached to an idea of how a group is gonna sound, it makes for kind of a strange situation. We’re growing with each record, so I think it’s cool if everybody else grows with us.

OL: How’d you guys hook up with Mos Def (for this album)?
NM: There was a sample I was trying to clear (which) he was on and I couldn’t clear the sample through 20th Century. It was for the movie “Brown Sugar” so I knew that he was in the movie and it was the next logical progression of thought, “Why don’t we get Mos Def?”. He was in town and it made sense. He came down to my studio and blessed us, it was a real pleasure to work with him.

OL: You guys set the bar really high with (“Quality Control” and “Power In Numbers”). Do you ever worry about a letdown?
NM: The people being letdown or ourselves being letdown with our work?

OL: I guess both.
NM: Well, I haven’t read a review or a feature on us this year, so I don’t really..I kinda don
‘t care, in that respect, what journalists say about us or what they think “dope” is because I’m still gonna be the same Nu-Mark I’m gonna be the next day. Even if they tell me I’m the greatest DJ in the world, I have to remember it’s a mirage and it’s just in the industry, I can’t believe when people tell me I’m dope or wack. So for the industry side, I don’t put out a record and then try to control the situation. What people think and say, you have absolutely no control over it. On our own, we always try to out-do the last record. I’ll always try to out-do the last beat I did on the last record and grow with the times. There’s still a chance of me growing an album as time progresses and being able to go back to the record and saying I like this, I like what we did on this song, etcetera, etcetera. The expectations are on myself. I have respect for our fans, but I don’t let them dictate who we’re gonna sign to, what we’re gonna sound like, or what we’re gonna do or how we’re gonna play our music.

OL: Are you guys still in touch with Cut (Chemist)? To what extent?
NM: Oh yeah, that’s my brother. Everything was very amicable. It was a situation where Cut couldn’t handle both projects. He wanted to do his own stuff. You know, you can’t have somebody in the group who’s unhappy or doesn’t feel like they can handle both. So the door is still open, he can always come back. We wish him the best on his project and he feels the same about ours, there’s no bad blood at all.

OL: Are there any solo projects in the works?
NM: I’m working on another sequel to the “Hands On” project that I worked on last year, a mix CD which features international emcees rhyming over my beats and over their own beats even. I’m trying to get more movies going. I just worked with Swizz Beatz and Q-Tip on a movie called “Take the Lead” that came out, just a little stuff here and there. I know Chali’s album is coming out next year, called “Fish Outta Water”, Soup’s doing a lot of acting, Mark (7even) just got one of his films bought by Ice Cube’s film company, so Mark’s got a movie that’s about to come out. Yeah, everybody’s hustlin’ man.

The One Line Random Eleven

#1: What did you want to be when you were little?
NM: I wanted to be a drummer.

#2: What’s the worst job you’ve ever had?
NM: I’d have to say telemarketing for a burglar alarm system. ‘Cause right when you call, people are already like, “Oh shit, why do you wanna know if I have an alarm on my house?” It’s the hardest thing in the world to sell, ya know? (laughing) Everyone we’d call would be like “Who the fuck is this joker calling me?” I’ve done all kinds of crazy jobs. I’ve worked at Daily News walking door-to-door doing sales. I’ve worked for [an ice cream shop], that was my first job. I was a busboy. You name it man, I’ve done it all.

#3: If you could have dinner with any three people, dead or alive, who would they be?
NM: I’d probably have to say….hmm…that’s a crazy question…I’d say Nas, Premier, and Biggie.

#4: What kind of shoes are you wearing right now?
NM: Adidas man. I was wearing Nike last night, so I just left it alone.

#6: Finish this sentence: “I can die a happy man when…”
NM: When…well, I can’t say “healthy” because then I’d be dying (laughter)…so I’ll be a happy man when I have a little bit more of a name on the production front in the industry. Just working with a plethora of artists. Moving around, not just one type of artist, but moving into different genres. And not having to worry about finances one bit.

#7: What’s the weirdest thing to ever happen to you on tour?
NM: We were leaving I believe Minneapolis – we were in a really cold place – and a girl tried to hitch a ride on the tour bus, but we didn’t know she was trying to hitch a ride. We found her underneath the luggage compartment before we left the city. If we had traveled as far as we were gonna go, she would’ve died under there from frostbite or whatever else. And we would’ve been definitely UP THE RIVER without a fuckin’ paddle.

#9: Name an artist you’d like to collaborate with.
NM: Common.

OL: Dude, that’s why I asked that question!
NM: Dude, I’ll need surgery trying to think of that (laughter). I have albums I like, I don’t have a (definite) favorite. But I’d say, for the hip-hop, Main Source’s “Breaking Atoms”.

OL: You said that’s your favorite hip-hop (album), so what about non-hip-hop? What’s something that people (might) be surprised that you like?
NM: Pretty much any Police record and almost any James Brown record.