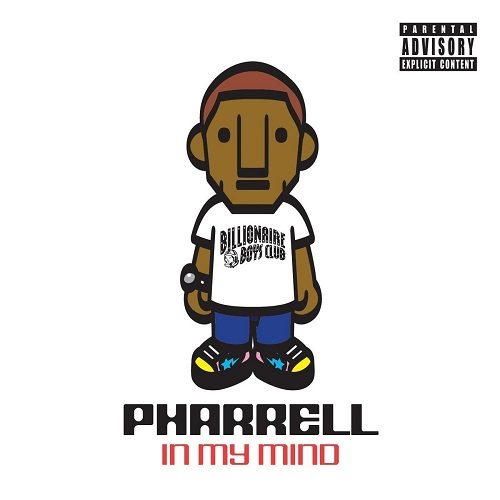 Pharrell :: In My Mind

“All songs produced by: Pharrell Williams for The Neptunes.” One has to admit the self-proclaimed “Skateboard P” is a “live by the sword, die by the sword” kind of guy. Pharrell and his partner Chad Hugo have laced beats for many of the biggest hip-hop hit songs in the last ten years, but whenever The Neptunes tried to be the stars in the booth instead of on production the results were mixed at best. Former RR writer Jayson Young summed up the dilemma well in his 2002 review of their rap debut “In Search Of” when he said of Pharrell “If this boy was a battle MC, he would be eaten alive by absolutely any rapper you can think of.” Harsh, but true. Pharrell is not an offensively whack MC given that he doesn’t try to portray being a hard-ass “Superthug” but no one will ever accuse him of writing a rap masterpiece. Maybe it’s not such a gamble to produce your entire solo album when you’re one-half of The Neptunes given their beats have made stars out of some really retarded rappers; then again Pharrell could have had an easy out if the album flopped and he had brought in a bunch of guest producers to do his shit. “It’s not my fault, it didn’t have that Neptunes sound.” No chance of that now for Pharrell, it’s time for the 15 tracks of “In My Mind” to either make him or break him as an artist both musically and lyrically. “Can I Have it Like That” featuring Gwen Stefani does get him off to a good start:

“Back in the day, my clouds was grey
And it seemed liked my angels couldn’t blow them away
But then I sold my first verse and copped that NSX
But I was still ridin in them thin-ass jets but now…
Man my vision so clear
Out the window of the Leer and I’m talkin on my celly
All the shit that you should hear, listen clearly now
… Hello? Can you hear me now?”

In MY mind I heard the voice of Del the Funky Homosapien echoing over and over again: “MC’s should know their limitations.” Thankfully Skateboard P does here – he’s keeping the rap simple and to the point. There’s something oddly charming about his vocal tone. He never shouts or gets loud, quite frankly it seems like his voicebox is made out of glass and would shatter if he did, but it still works. As much as I hated hearing LL Cool J whisper for an entire song on “Phenomenon” it actually serves as a good comparison, because LL still used his delivery and breath control to have a commanding presence on the song. Pharrell is no LL though – his voice is much higher pitched and he doesn’t have three decades of perfecting his flow under his belt. What Pharrell does have is those beats, and “Can I Have it Like That” delivers another Neptunes banger. The staccato drum introduction is a trademark that dates back to Run-D.M.C.’s “Sucker M.C.’s” but Pharrell didn’t go retro here – the song shifts gears after the intro into a low pulsing bass tone matched with a high energy tempo that instantly makes this song perfect for the club. What impressed me most is that Chad and Pharrell sometimes fall into the trap of finding one perfect bar and looping it ad nauseum, but here Pharrell keeps changing up the layers that accompany the bass. P even switches up the entire beat to an almost complete different song after the first chorus for a few bars before returning to the main bass refrain. The only bad thing I can say about this track is that Gwen Stefani was underused – would it be that hard to have her croon a bit?

Pharrell definitely (and thankfully) delivers on the production for “In My Mind.” The swinging synths of “How Does it Feel?” evoke the feeling of cooling in Florida on a warm summer night. “Best Friend” is that kind of R&B production you’d hear on the radio that WOULDN’T make you change the station – smooth and playful with just enough hip-hop attitude. P also picks the right guests to go along with his beats. It’s no surprise to hear Slim Thug on the hard-edged “Keep it Playa,” Snoop Dogg on the slick love track “That Girl,” or Nelly on the suprising rock/pop anthem “Baby.” Pharrell does more singing than flowing on this beat but that’s okay because St. Louis’ finest holds it down for him when it’s rappin’ time:

“As I look through the crowd of pupils into your pupils
Yeah boo I see you too
Damn right I wanna do you too
In your eyes I can tell what you’re thinkin
Why ain’t we somewhere hot for the weekend
Seafood eatin – I heard you like Red Lobster
You the type might like to sunbathe
Jump off the yacht, jet skis or runways”

It seems obvious by the time I’ve finished with “In My Mind” that this isn’t an album that should have trouble finding an audience. When he’s called on to do it for delf on tracks like “You Can Do it Too” and “Our Father” he does what’s appropriate – keeping his own lyrics and delivery simple and effective; even switching up to singing when necessary or hitting a Curtis Mayfield like falsetto on songs like “Angel.” At other times he lets the guests speak for him and they do it quite well, from Jay-Z on “Young Girl” to Kanye West on “Number One.” Let me also be a little bold (some might say crass) and proclaim that I expect a lot of people to be doing the nasty to “Take it Off (Dim the Lights)” this year. Despite my reservations about how Pharrell could handle a solo album going in, it’s clear he took his time with “In My Mind” and decided to do it the right way. At the end of the day I can’t fault him for being Skateboard P – he’ll never win any of those freestyle battles but he can damn sure make a record that you’ll enjoy listening to multiple times.