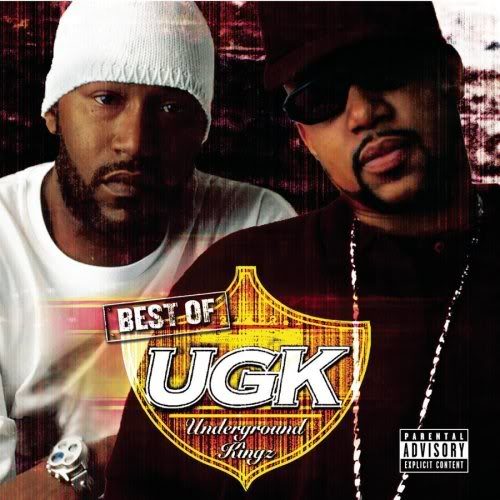 I find myself at the crossroads of a complex number of confusing conundrums writing this review. It’s three years old so I have to consider this a “Back to the Lab” review, but it’s also the last thing even remotely close to a “new” album UGK has released. That’s not to say the members of this Port Arthur, Texas duo haven’t been busy – Bun B did ten thousand cameo appearances all including the words “free Pimp C” to keep the group’s name and unity out strong before releasing his solo album “Trill” in late 2005. The aforementioned C was not slouching either, managing to release solo albums both before and AFTER being released from incarceration, including 2006’s “Pimpalation.” Nevertheless despite showing up on each other’s shit repeatedly and promising a new UGK album to their legions of fans, the shit just ain’t happened yet. Therefore 2003’s “Best of UGK,” released at a point when Jive Records might have actually believed it was the last statement in their career, is the only thing since 2001’s “Dirty Money” and a compilation of guest appearances named “Side Hustles” there is to go on.

It’s probably a little bit rude to say you need a late pass if you’re not already familiar with the lengthy career of UGK, but there it is. UGK was not the most consistant about releasing albums in a timely fashion, but they were definitely among the most consistant in terms of lyrical and musical dopeness. These brothers are unapologetic about their pimpish ways, their thuggish upbringing, and their desire to come up by any means necessary. Great groups are often defined by their chemistry, and there’s no denying that the alto pitched Pimp C and the gravelly voiced Bun B have it. What’s remarkable when viewed over an entire career retrospective is how little those voices have changed, or how little you would want them to. Bun B’s voice may have gotten just a bit harder – that’s about it. Delivery and lyrics have been on point going back to their national debut on “Too Hard to Swallow,” where you could find C letting his nuts hang over old school R&B on “Something Good” in hilarious fashion:

“One with a trigger, two with a bat
Three big brothers fo’ wanna squab with me
so I guess a brother gotta throw
Tell ’em like this ya better get up out my camp dude
Befo’ I have to pull a gat and get real rude
I don’t figure that it’s worth gettin hurt
Just cause ya gal wanna give me that skirt
Bet it feels funny when ya doin 69
Knowin that ya sippin on all my jimmy wine
And when ya get a kiss, do ya feel bad
Knowin that ya swallowed on a skeeter that I had
You wanna step to me but I don’t really think you should
I shoulda shot you up instead I told you somethin good”

While elsewhere on the more modern “Choppin’ Blades” you can hear the duo remaking E-40’s classic track “Captain Save a Hoe” and putting their own spin on it, pun definitely intended. Let Bun B tell it:

“Say nigga I keeps my rims clean, shinin through a dim scene
Got yo’ bitch pussy wetter than the captain of the swim team
Steppin out the Caddy bitch, I’m fresher than Dentyne
Slicker than Crisco, sweeter than Nabisco
From Philly to ‘Frisco where the Don be a Sisqo
You better get some blades if you still ridin’ this ho
Boys puttin’ Swangers on Benzes, it gotta stop
If you fittin’ ta ride foreign, then nigga you gotta chop
And Southern niggas still got the nerve to ride D’s
I ain’t hatin’ on Daytons, but it’s 2000 nigga please
It’s all about the candy paint, it’s all about the Vogues
It’s all about the slab baby, it’s all about the hoes”

Now anybody who wasn’t already familiar with UGK should get the point, but even if you only know them from Jay-Z’s “Big Pimpin'” you’d know there’s no slackin in their mackin. The reason it succeeds where similar artists would not is their slick accents, smooth approach and impeccable taste for choosing beats that age like fine wine. UGK’s lyrics do tend to border on misogyny and as stated often feature unapologetic thuggery, but delivered with punchlines and a trademark sense of humor that often seems to bely the gravity of situations they’re in makes their raps a cut above the rest. From the well known classics like “Pocket Full of Stones” and “Diamonds & Wood” to the comically self-censored “Ain’t That a B***h” featuring Devin the Dude, there’s plenty of good material to dig into even if you’re the kind of hardcore fan that has every album they ever made plus a Screw version to go with it. This album may have been compiled as a “Best Of” but now that they’re back together the best may still be yet to come.