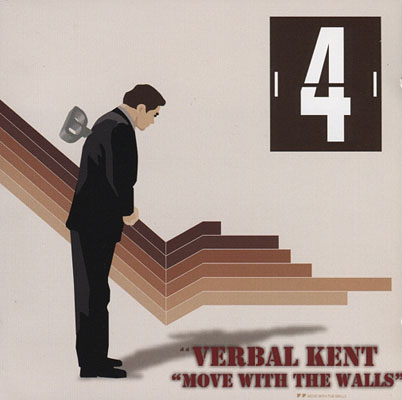 Verbal Kent :: Move With the Walls

“I chose rap over family and friends.”

Its hard to imagine facing such a decision. Music, a career in it, for that matter, certainly breaks people apart, even if it ultimately brings many more together. Disturbance between rap music and the generation of white Americans preceding it is certainly active, so it isn’t difficult to see where emcee Verbal Kent is coming from. Don’t get it twisted, though; homeboy is about as far away from the Marshall Mathers tip as Ray Benzino is, but like the Slim Shady song of the same name, Kent is even further from a quitter. Coming from a town responsible for some of the most soulful acts in hip-hop, the gritty Chicagoan is something of a black sheep. On top of that, he just happened to survive a knife to the throat a year and change ago.

Things haven’t went Kent’s way, but he’s back again, and he’s back in a big way just on the intro track, “First 2.” The crashing cymbals and raucous snare cracks are a hard shot to the liver, with Kent’s sharp delivery the chaser: “I’ma be the crowd killer to come/ninja with his num-chucks, kid I injure the drums.” He’s a fun listen, even if he is, essentially, another battle rapper. The difference between him and the rest of the pack is an invigorating and genuine disregard. While your average emcee may be on some “I smoke, I drank” yada yada, Kent comes with “shit, I ain’t savin’ the rainforest!”

His style alters from track to track, sounding either like a sped-up Evidence or a diluted version of something out of the Non Phixion camp. Coincidentally enough, Ill Bill drops by to fuck your head up on “Dead Serious,” but after Passion of the Christ and two Cage albums, his horror-raps have finally begun to lose their spunk. One of Kent’s finest moments comes in the chorus of the title track: “tell me what you thought it would be, this is not what I imagined at all.” Its beautifully doubtful; you can feel the regret; you immediately understand what a bitch it is down underground.

Kent comes correct on “Remain Hungry,” (“life’s beautiful, and I ain’t trying to waste in a cubicle”), and makes a sly reference to Black Sheep on “Duesday,” but “Dear Diary” has it all; bottled agitation, lost expectations, the realization that he’s just another fool trying to make it in a cold-ass world, all behind Maker’s lonely beat. Throughout the LP, Kent is supported by consistently better-than-average production, the stripped down funk of “Barcode” and the aforementioned “Dear Diary” two of the finer selections.

Verbal Kent’s strongest characteristic is easily his passion. He steps to the mic with a panache that grabs you by the collar, only, it comes with repeated listen the realization that he really ain’t saying much. “On stage spill my guts, I’ma cut my abs open for folks,” he says, and you can tell that he would, but the sad truth is that he doesn’t confess really anything worth breaking skin. There isn’t as much battling as one would expect, rather emceeing about whatever, which isn’t necessarily bad. If that ain’t your thing, Kent does a good job making you forget. “Move With the Walls” is a painless listen, lacking the highest of highs, but completely deficient of any real lows. Even though he don’t say much, Kent sounds natural enough to fool you for 48 minutes and put forth a solid release.