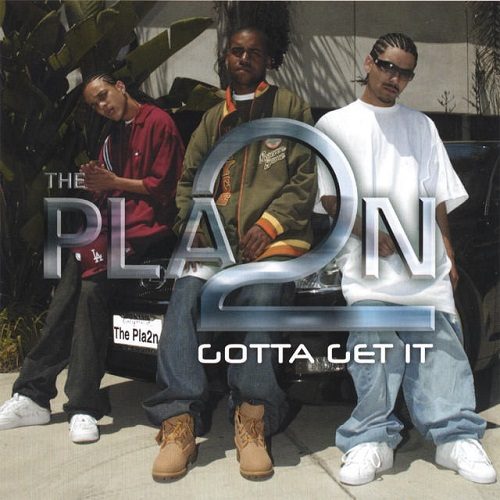 Back in the day my man Funkywidit had a nice little home studio that we used mainly to fool around inâ€”spitting our little notebook rhymes over Wu-Tang beats, scratching up some old thrift store records, and even occasionally recording a polished track or two. Son even recorded and mixed up a few proper albums, and we played them joints plenty during my teenage years. But we never seriously thought about trying to sell the shit, and we certainly didn’t think it would lead anywhere but our own love of Hip Hop. The Pla2n, based in LA and fresh out of high school, have made a record just as superfluous, self-indulgent and harmless as those old CD-Rs we cooked up in my man’s attic lab. And the only real difference is, the Pla2n are taking their studio dabbling seriously. The only problem with that is these cats seem so enamored with the whole idea of being artistsâ€”thinking of cool rap names and aliases, getting to hear their voices on a record, taking crispy album photosâ€”that they got gassed and forgot the only real important part about becoming a rap star, chiefly, having something interesting or entertaining to say.

“Gotta Get It” starts with “Intro,” a track that features a weak beatbox and some amateur crooning and ad-libbing, single-handedly assuring the absolute necessity of the CD player skip button for a whole new generation of listeners. Things get only slightly better with “En’ Mah Bonez,” but only cause they jack a haunting loop that I couldn’t quite recall where I had heard before, only that I had definitely heard it before (and seriously, what kind of statement does the ridiculously misspelled song title give at this point in the game?!). Harmless, generic lyrics about hustling get traded back and forth between the three members, quickly giving way to five straight sex joints. This makes up the body of the album (and damn near the whole thing), where the trio alternately wants to fuck, make movies of fucking, and make sweet love to that one special girl. It’s painfully obvious that The Pla2n belie their age in their subject matter (if not their juvenile flows), and while there’s nothing wrong about rapping to and about females (big up Devin), a little originality or at least cleverness would be greatly appreciated.

The beats stay Nyquil-like low key, with basic drum kit loops and forgettable hooks. Music to fuck to, I guess, but I prefer Stevie or Sade myself. And with rhymes like the following, it’s hard to be impressed and easy to see room for improvement:

Is smooth talk like that all it takes to get a girl out of her dress in Cali? I hope not. But it’s all harmless in the end, so I’m not trying to hate too hard on Pla2n. I’m saying though, using a number to phonetically spell your name (unless it’s 2Pac) is a little hackneyed. And having monikers like Guty aka “The G.O.O.T” and Smoke aka “The Best” would seem just a little pretentious if it wasn’t so damn silly. Plus, if you’re gonna do a corny artist profile in the liner notes, do it ill like Outkast’s “ATLiens.” The Pla2n chose four tidbits to bless us with, three of which are basically the same info: their names/aliases, their proper dates of birth, their astrological signs, and their ages. Oh, and don’t forget another glamour shot beside the profile of each, nicely accompanying the three group photos found elsewhere on the package (and in case you didn’t quite get enough of their perfectly manicured faces on the album proper, they’ve also included three more large headshots in the press release, which contains little else). REDUNDANT?! Look it up in Webster’s and find The Pla2n’s picture one more time. With only nine tracks on “Gotta Get It,” seems like the only thing The Pla2n overlooked in the whole album creation process, as I said above, was actually making the music.

The Pla2n :: Gotta Get It
4.5Disappointing
Music4
Lyrics5