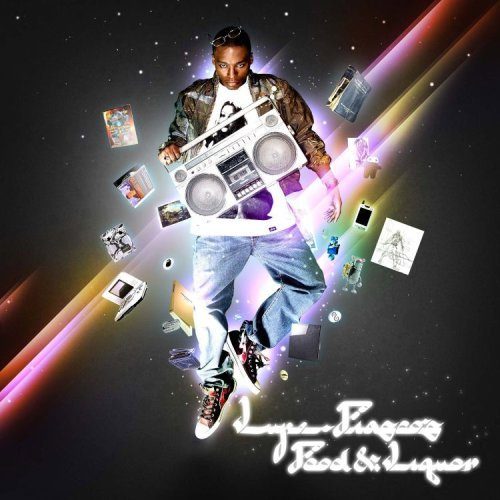 The long wait is finally over. After teasing us a year ago with a hot cameo on Kanye West’s “Late Registration” CD, getting the newly won fans even more amped up with the “Kick, Push” single and video, and making everybody so damn hungry that bootleg copies and Touch the Sky” had to satiate the public’s appetite, it’s finally time to sit down with some “Food & Liquor.” Major label debuts are always tough but for the Chicago native born Wasalu Muhammad Jaco and better known as Lupe Fiasco this one couldn’t be any harder. He’s already been around the bend once before, getting signed and dropped by a major before his album even came out, so this time patience IS a virtue. Lupe’s good, he might even be really damn good, but at 25 he’s only just getting started in the rap game and people are already expecting him to be the savior of hip-hop music. So before we get this review started, CALM THE FUCK DOWN. Let’s let Lupe be Lupe and the rest will fall into place all on its own. “Intro” to the side, let’s slide into the first song produced by Lupe the Third’s partner in crime for most of this album – no not Jigen, but a man called Soundtrakk who samples from “How Does it Feel” to give us something “Real”:

“Lusssst… sometimes can override trusssst
She said that’s why she gave it up
My man said blood spilled out of everything he tou-chhhhed
He crushed everything he crushed
Ruined everything he loved, he just wanted to rushhhhh
Blamed it on the times bein rough
Doin dirt, with the devil, chasin after the dusssst
Make a fussss, if it’s them, but we hushhh, if it’s us
That’s why, my momma said she wanted somethin REAL”

Now I gotta give it up to Lupe because even in a day and age where you can shuffle album tracks digitally into any order you want, it was still risky to start the CD off with this one. The heavy rock backdrop doesn’t lend itself to the formulaic start and finish bars of many rap bars, but it’s obvious Lupe wrote the lyrics while listening to the track and molded his lyrics and his flow to fit and it works perfectly. Being bold and different for Lupe pays off right from the jump. Things are a little more tradititional on the Prolyfic laced “Just Might Be OK,” which is so upbeat you might actually be inclined to agree with the song’s title. “Affirmative, no further furnishin is needed/I believe we are completed/Dig, we all in agreement on the wallpaper/happy with the color scheme, welcome to the crib.” Thanks Lupe – mind if I grab a beer from the fridge and put my feet up on the sofa? Cool. The album moves on to “Kick, Push” which we should all be familiar with by now, but yet I’ve always wondered – is Lupe telling a story about someone else or was HE the one who was “branded, since the first kickflip, he landed” in the song? He seems more intimately aware of skateboarding than Skateboard P. Speaking of Pharrell, the next track on the album is the lone Neptunes beat of the CD for a song titled “I Gotcha.” It’s good, but the echoing drums and understated backdrop of Mike Shinoda’s beat on “The Instrumental” are even better. Don’t be fooled by the title, Lupe’s still got rhymes:

“He just sits, and watches the people in the boxes
Everything he sees he absorbs and adopts it
Heeeeee mimics and he mocks it
Really hates the box but he can’t remember how to stop, it
Uhh, so he continues to watch it
Hopin that it’ll give him somethin that he can box with
Or how the locksmith, see the box as, locked in the box
Ain’t got the combination to unlock, it
That’s why he watch-es, scared to look away
Cause at that moment, it might show him
What to take off the locks with
So he chains his self to the box, took a lock and then he locked it
Swallowed the combination and then forgot, it
As the doctors jot it all down, with they pens and pencils
The same ones that took away his voice
And just left this instrumental”

Damn. That opening verse works on so many different levels it’s hard to even name them all – it all depends on what YOU as the listener consider “the box” to be. What’s scary is that Lupe Fiasco didn’t even have to try this hard to be impressive. “Food & Liquor” was probably going to sell well no matter what based on the hype and the public demand, but instead of half-assing it or turning in a bunch of club tracks with no thought to them he seems to have gone 180 in the other direction and made EVERY SINGLE WORD MEANINGFUL. You can even hear it in the way that Lupe flows, carefully choosing which beats to pause at and which syllables to either emphasize or elongate. This is a man who takes the craft of hip-hop lyricism very seriously. Thankfully the beats are just as serious. Soundtrakk makes a name for himself on the symphonic backdrop of “He Say She Say” provides the perfect backdrop for the somber and sad verses of what it feels like to be a fatherless child. On the flipside Soundtrakk makes things so bright and positive that the aptly titled “Sunshine” brings you out of the darkness right into the light. The “Daydream in Blue” sampled and inspired epic “Daydream” featuring Jill Scott, the Kanye West laced “The Cool,” and the smooth Needlz jam “Hurt Me Soul” all keep things flowing until Lupe links up with Jay-Z for the Prolyfic produced “Pressure” where Lupe Fiasco is out to prove he’s got the rap game sewed up LITERALLY:

“And so it seems that I’m, sewin jeans
And, 1st and 15 is just a sewin machine
So I, cut the pattern and I, sew in seams
And, button in this hustlin then publically I’m Buddy Lee
There’s no bustin them and cuffin them is like
usherin in the regime, they want me to make Prince pants
But I withstand, I ain’t gotten into that
A little big in the waist, two-pocket on the back
Call them Nu-vi’s, O.G.’s covered in blue dye
Give ’em the game, that’s like givin chocolate to the fat
Look, how you think I got here?
That’s the same game that came through where I lived as a kid
in the bad luck truck and threw boxes off the back
Made me a ripper, deliver like river
Content a little more thicker, slicker
Yeah, and they said oil and water don’t mix
Now they all down at the beach washin off the fish
Was Blackbeard ’til I brought the Roc into your ships”

I’ve been impressed by some major label debut albums before, but quite honestly I think Lupe Fiasco takes the cake here with his “Food & Liquor” and eats it too. Fiasco wasn’t satisfied with just a slice of the rap game, he wanted the whole damn pie. Lupe’s only problem now is the same one Kanye had – when your first album is that fucking good, where do you go next? I look forward to finding out how he’ll follow this up and what dishes he’ll serve up next.