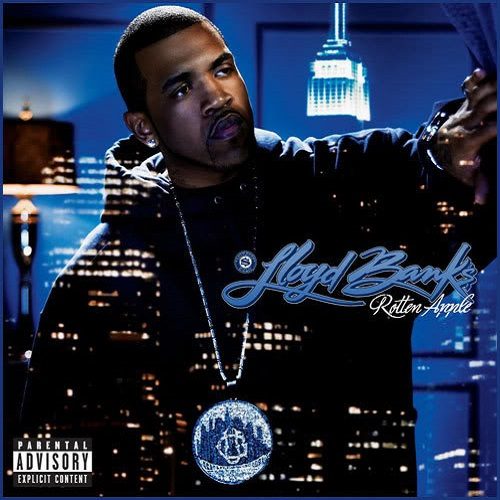 e G-Unit’s back in effect. You may have thought they were too embroiled in feuding with The Game or dealing with their various legal problems to record any albums, but on the low Christopher Lloyd, b/k/a Lloyd Banks has been diligently been putting in work. In fact it’s not unlike the patient wait G-Unit fans had for his solo album “The Hunger for More” the first time around, because at the time Banks was the first member of 50’s family after the G-Unit group album. They started off with a couple of hot singles, got a buzz going, and then released an album that largely lived up to the public expectations. Listening to the the pounding dancefloor beat of “Hands Up,” produced by Eminem, Dangerous LLC and Bang Out with a catchy hook sung by 50 it’s clear the formula hasn’t changed one bit:

“Yeah, it feels so good to live sucker free
I’m soakin it all up, while your girl’s suckin me
It mean the world to her, it’s nuttin but a nut to me
Look miss, get a grip and let a muh’fucker be
I’m a rap star, who ‘posed to be ridin around in that car
Two in the front, in the back got the plasma
This ain’t a free ride, you gotta have the gas ma
I wouldn’t buy a chick a pump that got asthma
And I’m busy so I move a bit faster
You can’t tell me yes if I don’t ask ya
Huh, I’m a bastard
Damn near chauvinist, hand over the plastic
Cause they wanna see your man go in a casket
Rule number one, keep your gun or get your ass hit
That’s it, lights off and ya body stiff
By the same niggaz you used to party with”

If it ain’t broke don’t fix it right? So far there’s no evidence anything about Lloyd broke during the two year interim. Occasionally it seems a bit ironic Banks rolls with 50 because on his own or in any other group he’d be the alpha male, as his ruggedly gruff voice and smooth delivery make even the filthiest of sentiments come out clean. Unfortunately 50 exudes the charisma three men rolled in to one, so Lloyd may always be seen as second fiddle. It even seems intentional that 50’s guest appearances on “Rotten Apple” are on some of the hottest shit, from the lead single above to Havoc and Sha Money XL produced title track (also featuring Prodigy) to newcomer 10 for the Triad’s stellar and humorous banger “The Cake.” It may be a little too rugged for FM radio, but Sirius and XM will be flooded with requests due to the clever use of “I Believe” by Triumvirat (they sold their soul to rock’n’roll) and samples that punctuate the song’s title:

“I need the cake, nigga!
The Unit gon’ play, we rap but we strapped
Buck got the shotgun, 50 got the mac
Spider got the sweeper and he gonna head clap
You won’t have another birthday (*CAKE*) after that
Cause Yayo got a temper and he don’t know how to act
And I’ve been gone all winter, but now a nigga back
To get the (money.. money.. MONEY.. MONEY!)
(*CAKE*) And you motherfuckers lookin like steak”

Banks is an unapologetically charming sociopath, not for a moment denying he’s singularly motivated by the accumulation of money weed and bitches, not necessarily in that order. What’s continually surprising about Lloyd is just how slick he can be when he wants to reach over to the quiet storm side, a trait he exhibited on songs like G-Unit’s “Wanna Get to Know You” and again on his solo track “Karma.” That’s where Lloyd seperates himself from 50 the most – he muscles his way to crossover stardom taking the rap charts by force while Banks can get in wherever he fits in and get spins where some of 50’s more menacing lyrics wouldn’t. The Ron Browz laced “Help” features smooth crooning by Keri Hilson and a beat that echoes Audio Two’s classic “Top Billin'” to create a rap so mellow you could light a scented candle and chill:

“God blessed you when he made me
I mean he blessed me when he made you, I got a little game too
They know me everywhere I go, that’s what fame do
But we can keep it on the low, what’s your name boo?
You stuck in your ways, but I know how to change you
Range you, tell you things like you’re my angel
There’s no rules when it come to this, write down your number miss
They call me Banks, my government is crisp”

Conversely Banks can flip it and make even the mellow Musiq Soulchild come off as thugged out as Nate Dogg on “Addicted.” There are plenty of pleasant surprised on “Rotten Apple,” from the guest appearance of Rakim on “You Know the Deal” to 8 Ball, Scarface and Young Buck all collaborating with Banks on “Iceman” to Needlz producing a song featuring Mobb Deep called “Get Clapped” that would have greatly improved “Blood Money” had it appeared on their album. Only a few tracks on this album fail to live up to their potential – “Playboy 2” has an annoying and monotonously repetitive backdrop, “Stranger” is solid but unimpressive and “NY NY” has that trademark Eminem production that can either hit or miss – in this case miss. It’s safe to say though G-Unit fans and Lloyd Banks fans in particular will be satisfied with “Rotten Apple.” The city they hail from may be sour like bad fruit, but the sound of the click is still sweet to the ear.