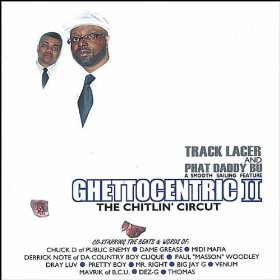 When people think of underground Hip-Hop they think of a lot of areas. New York usually comes to mind, as do many cities in the South, Midwest and West. Milwaukee, however, is not usually on the tip of everyone’s tongue when it comes to fresh beats and rhymes. Track Lacer and Phat Daddy Bu are hoping that, even if the city isn’t the first one that comes to mind, they can add it to the long list that people already mention as Hip-Hop hotspots.

Track Lacer and Phat Daddy Bu’s latest contribution to the Milwaukee Hip-Hop scene is “Ghettocentric II â€“ The Chitlin’ Circuit.” I know, with a title like that you might be thinking, “Are these guys biting Little Brother?” Judging by the intro alone, no they’re not. To Track Lacer and Phat Daddy Bu the new chitlin circuit is the underground Hip-Hop scene. Their feeling is everyone is trying to say something but you won’t hear any of them on the radio, and just like the chitlin circuit artists performed for their own people when they were segregated these underground artists will continue to perform for their own people as long as they are segregated from mainstream radio. It’s an interesting comparison that is the backbone of their work, something they’re creating for their own audience, not a mass audience.

The Milwaukee duo whose main idea is “It ain’t worth it if you ain’t rappin with a purpose,” have slower flows reminiscent of late 80’s artists, which, along with West Coast and southern artists of the early 90’s, seem to be Track Lacer and Phat Daddy Bu’s biggest influences. The song “Rock Rock Ya’ll” sounds more like a Run-D.M.C. track than anything in the current underground Hip-Hop scene, and it would be fantastic were it not for the constant “oh’s” in the background that take away from the song. “S.U.V.” is another track that I think would be significantly better if they took the background sound effect out of it. You can hear them channel Westside Connection with their “Super Bad” beat, and early Dungeon Family with the song “Gangsta Cool.”

Topic matter on “Ghettocentric II” ranges from the aforementioned chitlin circuit concept to internet dating, to independent women, with a few good old fashion braggadocios tracks thrown in for good measure. “Havin That Dust,” a very funky attempt to introduce new slang, and “Getcha’ Bread Back” stand out as two of the better songs on the album.

Overall I think Track Lacer and Phat Daddy Bu are a talented duo. Some of the mixes on “Ghettocentric II” seem a little off, like the beats are a little too loud, and there are other production issues, like inserting one sound effect too many, but from a RAPPING standpoint I think there’s a lot of look forward to, here. Of course, being underground limits one’s production choices and I’m sure being in Milwaukee limits them even more, so it might be time for a road trip to get some new tracks because I have a feeling that with the right beats Track Lacer and Phat Daddy Bu could seriously grow their audience.