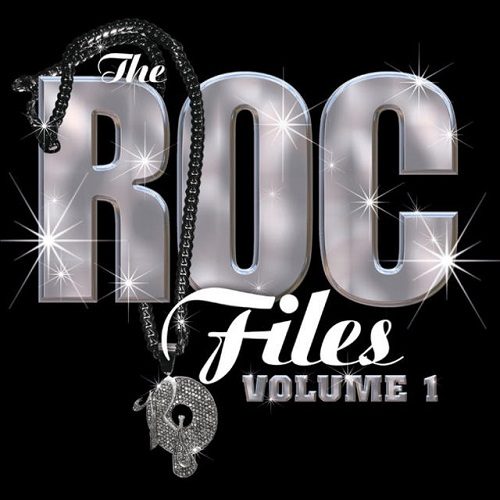 Roc-A-Fella is a brand name that has become synonymous with quality. With lyric spitters who have hot rhymes and music producers who have hot beats, their reign at the top of the pop and hip-hop charts has been hard to defeat. It’s no surprise that the Roc would crown this achievment with a compilation album, especially coming on the heels of their frontman, mentor, and best-selling artist Jay-Z going into “retirement” as such? It’s the ideal time to do a worthy retrospective that shows his best work and highlights obscure classics while simultaneously showing how those under his wing grew into stars in their own right, with classics of their own.

For the record though, there is a “best of Jay-Z” album already on the market, although “Chapter One” can be hard to find and is generally labelled as an import by most retailers (and highly priced accordingly). Still, if you’re looking for a Roc overview of Jigga, you may want to pick that one up instead. “The Roc Files Volume 1” clocks in at a paltry 48 minutes spread over 11 tracks. That wouldn’t be enough to recap the best of Roc-A-Fella without Hova, and it’s certainly not enough with. The Jigga tracks that ARE included don’t make a strong statement for him regardless. “It’s Alright” with Memphis Bleek was a decent song on “Vol. 2 Hard Knock Life” and the “Streets is Watching” soundtrack, but doesn’t stand as an all-time Jay-Z masterpiece. “Sunshine” with Babyface and Foxy Brown comes closer, but when it was originally released many of Jay-Z’s “Reasonable Doubt” fans were convinced he had sold out thanks to it’s airy pop music quality and disco colored video. Those same critics were unfair to “The City is Mine” as well, also from Jigga’s “In My Lifetime Vol. 1.” Re-making Glenn Frey’s “You Belong to the City” as a rap song was ill, no doubt, but it was no “Brooklyn’s Finest” featuring Notorious B.I.G. either.

With a lack of Shawn Carter classics, from underground anthems like “D’Evils” and “Watch Me” to respectable crossover hits like “I Just Wanna Love U” and “Izzo (H.O.V.A.)” to obscure hip-hop gems like the original “Who You Wit” from the Sprung soundtrack, there’s almost no way “The Roc Files Volume 1” can be said to do Jigga justice. The album must be examined instead on the merits of highlighting Roc-A-Fella’s best material – the songs that won them hip-hop converts even without Jay-Z. Unfortunately here the album is not comprehensive either. I’ve never heard any rap fan say in conversation “Yeah that Rell got me into the Roc, he can sing his ass off” or “How about that Christion, ain’t his slow songs the bomb?” Bizarrely, The Roc Files includes three songs by them, and the only one worth mentioning is Rell’s “Love for Free” thanks to a smooth jazzy Dinky Bingham beat and Jay-Z’s guest verses. “The Roc Files” could redeem this mistake by picking some of Beanie Sigel’s best raps, a Roc contributor who got off to a rough start but through his determination and perseverance became one of their strongest assets. “The Truth” from his same-titled debut doesn’t do it for me though – one of the few Kanye West tracks that’s truly unlistenable due to it’s monotonous repetitive beat. He’s better served by his “Roc the Mic” duet with Freeway, but that’s it for Beans.

Beanie Sigel coverage may be lacking, but “The Roc Files” could still redeem themselves with a fine selection of Memphis Bleek songs – a long standing Roc member whose “M.A.D.E.” album hit store shelves the same week as this compilation. As you might have guessed by this point though, the comp can’t really do a thing for Bleek either. Instead of highlighting the songs in his career that showed his potential early on like “Coming of Age” or “My Hood to Your Hood” or hot songs like “Change Up” and “Is That Your Chick,” it concentrates on more mediocre cuts like “Memphis Bleek Is” and “My Mind Right.” True, “What You Think of That” is tight, but he is outshined by guest Jay-Z completely. In fact, if you want to hear from Bleek you’re better off buying “M.A.D.E.” than this album – it showcases his talents a lot better.

With all these failings, “The Roc Files Volume 1” STILL could have succeeded. Up-and-comers like Young Gunz with their smash hit “Can’t Stop, Won’t Stop” could have been included. Amil may not go down as a great female MC, but her “4 Da Fam” song is still one of the tightest all-star Roc-A-Fella collaborations over one of their best beats ever. And if Jigga could put aside his beef with The Jaz for a minute, Roc fans would no doubt love to hear songs like “Foundation” and “The Originators.” And what ever happened to Sauce Money anyway? “Pre-Game” with Jigga or even “Face Off” would have been hot to death. It’s not that most of the songs on “The Roc Files Volume 1” aren’t at least decent – some of them are in fact pretty damn good. It’s just that with all of the material available to them the fact that THIS is the best they could compile from it is pretty damn dissapointing.