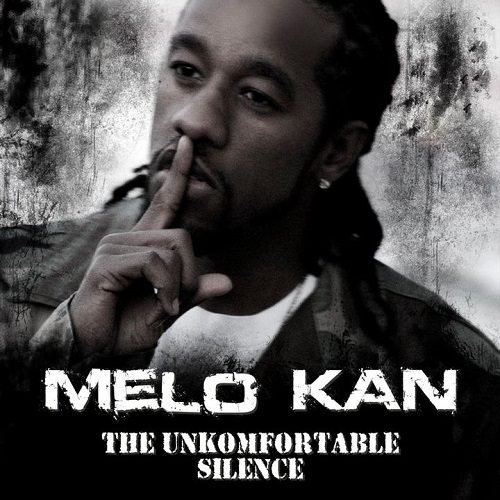 “Any track you name I probably killed it
The young’uns say I’m dumb sick
Artist & Repertoire play you on some punk shit
It’s all gravy cause they fin’ to get they run picked
Keep a nigga waitin in the wing like a drumstick
New York say I spit straight up pimp
I did real songs, recouped, no made up shit
Your top eight’ll get straight up ripped”

It’s easy for me to believe Melo Kan is a ten year veteran of the rap game with two previous albums out. Even though we’ve never reviewed either of those previous releases, it may be that Melo Kan’s “The Unkomfortable Silence” is a new peak of confidence for the aspiring rap artist, and as such he’s seeking a far wider audience for his last album than previously local album releases. And the fact is Melo Kan is not that bad on the mic. He certainly lives up to the “mellow” part of his name – this is not a guy who feels the need to scream and shout and threaten violence to get his point across.

There are some solid B+ and up songs on this CD. “I’m Still In Love With Her” has a jazzy piano backdrop from Stan Beats and nicely follows up on a concept Common introduced to hip-hop back in the 1990’s. The For’Son laced “Reachin'” has brassy horns, a breezy chorus, and Melo chooses evocative lyrical descriptions you’re not used to – his “palpitating heart” instead of his “beating heart” – and that’s the kind of creativity that sets rappers apart. He’s also got an insightful political view which for him cuts through a lot of BS, and it might for you too:

“Economics whip yo’ ass, the economy is bad
Greedy CEO’s get bailed, workers left holdin the bag
Yes my President is black, how irrelevant is that?
It’s the system, not the symptom […] this is mo’ than rap”

Other standout songs include the stripped down Q-Tip style production of “Easy” featuring Jazzy, the quiet storm designed “Signs” featuring Nic Jackson, the heavy “Kreepin'” featuring Bad Lucc and the straight up Southern “Blokk On” featuring J-Dawg of the Boss Hogg Outlaws. The latter three were all produced by FOC, who does a majority of the songs on “The Unkomfortable Silence” – 9 out of 19 total – and shows good potential on the boards. There’s more things to like about Melo Kan to hate, but there are a few problems that do need to be addressed.

First and foremost is the fact almost every rapper today seems to feel the need to have 15+ songs on their albums. Unless you’re coming with an absolute 10 out of 10 classic, you’re only lowering the end result of your album by cramming as much material on it as the CD can hold. The mediocre tracks bring down the average set by the good ones, and there are a few here you won’t listen to twice – “No Apologiez” sounds unfinished and guest Danny Meyers doesn’t add much to the album. Rup Cilantro keeps getting featured throughout the album as well, and I’m not feeling him on “Klean Pt. II” or “Swisher Sweet Dreams.”

In fact the biggest problem of “The Unkomfortable Silence” is that Melo Kan gives up far too much of the spotlight to artists like T-Tru and T.A.T. Early in the album Kan feels like a star but by the end he feels like a contributor to a compilation album. That’s the most uncomfortable thing about the entire album in a nutshell. In his bio Kan talks about wanting to be the next generation of the West coast following in The Game’s footsteps, and if that’s how he truly feels, he needs to step into that spotlight as a soloist as much as possible. It’s okay to have somebody sing a hook or provide a chorus on a song here and there, but feel the confidence to show us your star presence without relying on a cast of extras who might be your friends but only end up holding you down. We’ll no doubt hear from Melo Kan in the future, and hopefully next time, he’ll shine on his own.