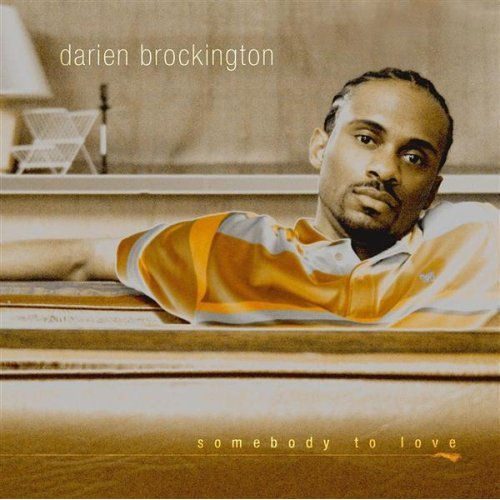 Darien Brockington :: Somebody to Love

Whether you like it or not, R&B is becoming more and more influential in hip-hop music. Some MC’s, like Common, use the strength of swooning choruses to add layers to their own music and perhaps attract a larger audience. Other MC’s, like underground battle cat Copywrite will “only use an R&B singer in my song because she has a gallon of my semen clinging to her face.” R&B public couldn’t care less about that discussion. They have their own favourites, and these favourites sometimes cross over to the hip-hop side for a bit of moonlighting. Justus League affiliate Darien Brockington started out with singing hooks for the likes of Little Brother and Nicolay. With “Somebody to Love” he steps out of these rappers’ shadow, with a little help from his North Carolina friends.

“Somebody to Love” must be the most stereotypical name for an R&B album I have ever heard. This musical genre is not well-known for breaking new grounds, with its eternal themes surrounding pining, loving, and leaving. So judging a book by its cover is not a wise thing to do, even though at RapReviews, we review rap related albums. So why are you still reading what I have written? At first, I didn’t have a clue myself. The first tones of the album made me fear for the worst when the whispering sound of a harp preludes the following words:

Think you had enough stereotypes for now? Check out the full track list for further enjoyment. “Think it Over,” “More and More, “Don’t Say Goodbye,” “I Got What You Want,” “Lover and Friend,” “Come on Over,” “I Miss You,” “Crazy,” “I Need You,” “He Will Break Your Heart,” “Can We Fall in Love Again,” “Thank You,” and “All We Ever Need.” It reads like the episode index of one of those popular Brazilian telenovelas.

Again without judging these books by the cover I skip to the next track. “Think it Over” immediately explains the link between Darien and hip-hop music. Little Brother’s 9th Wonder creates an offbeat drum pattern with a swooshing backdraft that transforms a classical slow dance song into something a hip-hop listener could really enjoy. This is 9th Wonder at his finest, and it is a shame he just does two songs on “Somebody To Love.” The combination of soulful, hip-hop beats and a singer’s voice can be a rewarding one. D’Angelo crossed boundaries with “Voodoo,” and more recently the Dutch production rookie of the year Nicolay showcased musical fusion with his latest album “Here,” (please insert link here) which featured Brockington on some of the songs. Surprisingly, Nicolay’s name is nowhere to be found on “Somebody to Love”‘s production credit list. Instead, most of the music is taken care of by the fairly unknown E. Jones. Jones excels in melancholical slowdance tunes with a synthetic ring to them. Other noteworthy names on the production shortlist are Khrysis and Vitamin D.

Brockington has always been strongly affiliated to the Justus League camp, which also released this album under its banner. Before he hit off his musical career, the crooner shared some school classes with rappers Phonte and Big Pooh, even though it would take years before they ended up working together. In this light, it is no surprise “Somebody to Love” features a couple of Justus Leagians, like Chaundon and Little Brother. Chaundon does one unimpressive verse on “More and More,” but Little Brother comes through for the times Darien did background singing on “The Minstrel Show.” (Please insert link here) The uptempo “I Need You” has a compelling blaxploitation bass guitar sample produced by DR, which suits Phonte and Big Pooh well. “I Need You” is arguably one of the best songs on the album, and that also rubs off on Darien’s style of singing. It is like he feels more comfortable when he is flanked by his label mates.

Is Darien, whose name according to the press release is ancient Persian for ‘He who upholds the good,’ such a bad singer? No, by all means. He has the ability to put emotions into his music, and he sounds like he genuinely believes in what he sings. His lyrics come a dime a dozen, though, and I couldn’t discern a single ballad with some depth in it. Brockington’s voice also sounds a bit slick, and because he avoids the higher tones and vocal outbursts, “Somebody to Love” stays too much on the safe side. Or boring side, if you prefer that classification.

Brockington is a meritorious singer, but I don’t think he possess the musical charisma to carry a full album. I look forward to his next feature on one of the Justus League albums, but nothing more than that. The R&B crowd will shrug after reading this review. For them, Darien Brockington might as well be the next best thing.