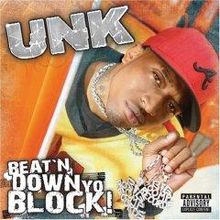 Unk :: Beat’n Down Yo Block

“Now hit the danceflo’, and bend yo’ back low
She do it with no hands, now stop pop and roll
I’m smokin bubba hoe, yeah they in trouble hoe
I like the way she move, a undercover hoe
Now everybody leanin, I made the crowd rock
Now go on and walk it out, I see they on my jock
She want that bubblegum, is they the DoubleMint twins?
Two hoes choosin me, so I know that I’ma win”

That selection is straight out the first verse of Unk’s hit single “Walk it Out.” The song is written by Anthony Platt, Howard Simmons and Montay Humphrey; the crunk beats are produced by DJ Montay (who I presume is the aforementioned Humphrey) for Top Quality Productions. Now here’s some biographical data – he’s from the South and a member of Atlanta’s own Oomp Camp, and before pursuing a career as a solo rap artist he had a reputation as a DJ. You can even get a free pre-release mixtape from said DJ at his Unk Music website. And to finish bringing y’all up to speed, here’s Unk’s own words on his newfound success: “Some people don’t know how to act when they get a little credibility. What’s gonna work for me is just me being me, networking, communicating, not changing a thing. I’m gonna continue to be me and keep on making good music.”

Well said Unk. If there’s one thing rap doesn’t have enough of, it’s MC’s who stay true to their roots and never change a damn thing about themselves. Oh wait – that’s 9 out of 10 rappers in the industry. Everybody throws up their hood, city, county or area code like it’s the greatest thing ever. Everybody proclaims their posse and the members thereof as being the baddest clique (often with the most guns) of anybody in music today. Every rapper says they smoke the most weed, drink the most liquor, and fuck the most hoes (or bros) of anyone alive. So what has Unk done to seperate himself from the pack on “Beat’n Down the Block,” a phrase I more closely associate with Too $hort than anybody from the Dirty South?

“Catch the beat like me, bounce your body like this
You can do it by yourself, go on and bounce on a bitch
I’m so fresh, got the fresh Grey Goose on the rocks
Bring it back, and hit the stage with my bomb in my sock
Now every hoe wanna jock, hear my song so they cop
These shoulders need to bend, if you can’t you need to stop
Everybody bring it back like the trap and set up shop
Fuck a hater, youse a snitch, youse a flashlight cop”

Nada nada nada, not-a-damn thing. The quote from “Bring it Back” shows Unk is pretty much as generic as they come. He’s got a hit single, he’s probably got everybody in the clubs wigglin and jigglin and shakin they pelvis, but I’m standin’ over here on the side and I got my arms folded. It’s not because I’m gonna twist my body from side to side – although if Three 6 Mafia had produced the album there would be at least half a chance of that happening. I hate to break it to DJ Unk and his homey Montay Humphrey but these are interchangable beats with no distinctive qualities whatsoever. I could switch “2 Step” for “Flatline” for “Ayyy” for “Hold on Ho” and pretty much get the same result every time – same tempo, same bassline, same monotonous rap about the same topics for that matter. You want to fire up the dro and be “Smokin’ Sticky Sticky” with Unk? Well go on and “Hit the Dance Floor” then, because it’s a “Brand New Day” and you know we “Comin Down Da Street” looking “Fresh Dressed” drinking on that lean to “Slow it Up.”

Somebody poured me an extra shot of Haterade in my sports drink today, because I’m just not feeling this shit. Do I applaud Unk’s hustle for hooking up with Big Oomp and getting a record deal? Yes. Do I applaud him for having a hit single and building off the strength to get “Beat’n Down the Block” in stores nationwide? Sure. I’ll even give him a little extra credit for including a bonus CD with six extra tracks just to fuck off the bootleggers and give the consumer a little more for their money – not that I want six more Unk tracks myself but I’m sure there are some people out there who do. It’s all good, I love hard Southern rap as much as the next man (and probably more) but I have to give props to those who distinguish themselves in some form or fashion. When it comes to rappers like Young Jeezy or Yung Joc, both have shown an ability to move beyond cliche at times (though they should try it more often), flow with a distinctive and previously unrecognized style or vocal tone, and rap over beats that are certified hits. Unk sounds like everybody else, his beats all sound the same, and his topics are the same old same old. I’m sure Unk is trying hard, but he needs to try harder because “Beat’n Down Yo Block” is best left to Too $hort when he’s boomin’ “In the Trunk” because his over ten-years-old rap CD is still more interesting and innovative than Unk’s.