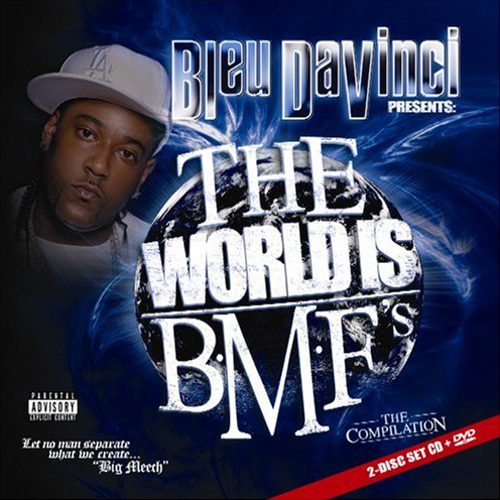 This is banality at its unadulterated most trivial. If I wanted, I could probably sum up the contents of “The World Is BMF’s,” accurately, in one sentence. I wouldn’t need proper spelling, punctuation, prepositions, any of that proper English shit. Actually, let’s give that a shot-

The contents of the record apropos are of such middle-of-the-line, holiday-gingerbread-cookie-cutter retrograde it has to make one ponder – 1.) Could this be a covers album? 2.) Are these remixes of the same songs I hear everyday? 3.) Am I even listening to this right now – or is Satan playing a terrible trick on me? Everything on this record applies to such a routinely normal level of normalcy that my mind drifts upon listening. Thoughts that entertained me while listening included:

“What’s on HBO tonight?”
“I wonder what Beyonce’s doing right now…”
“Do I look better with the collar OVER the sweater, or no sweater at all?”
“Taco Bell…”
“When’s the next Madvillain dropping?”
“Yo this sweater IS ballin…”

In short, “The World Is BMF’s” is the stereotypical catalyst for anyone who’s been hating on the mainstream since “Midnight Marauders.” Some of the finest musicians of our age have made careers directing hate towards everything BMF stands for; its approach; its production; its lack of artistic relevancy. Say what you will, but I say this as a man who takes pride in defending his mainstream brethren; you know I’ve got my 50 shit right next to my 7L. But Curtis Jackson’s buckshot drawl is something in itself to behold. Any distinctions at all would help this record significantly.

As recycled as the entire damn thing is, there can be no argument that Bleu DaVinci and his boys at least sound experienced. Every track, produced in large by S Class, has bump and club appeal, and the emcees at least rap on beat. Hell, some of their flows are pretty tight (peep Tuge on “Star In the Hood”). Even Bleu, who judging by the DVD would look the Dame Dash of the group, is a productive emcee. On the subject of getting blunted (“Love To Smoke”), homeboy glides with the finesse of a Snoop and the delightful bay area articulation of E-40, but he’s on his grittiest grind for “Work.” Still, “you got preschool paper, nigga, my money grown” is a line that repeats itself in my head torturously, and the album presents itself as nothing more than an uninterrupted boast ‘n’ brag session.

The aforementioned S Class dodges my belittling, as he proves to be aight and consistently hooks Bleu and his boys up something proper, as long as he’s avoiding all-out imitation Scott Storch synth-funk. “Work” moves planets with its looping chants, and “Strip For Me” is the kind of bump you want in your car cruising down the strip at night. The best beat might be that of “Ride Together,” but even that violently fails in recreating the sample from Nas’ “If I Ruled the World.”

Yeah, I’m aware of what BMF is. Whether that mafioso shit is material or myth affects me something below not at all. What’s most telling is how much their storied credibility does little to strengthen the threats, intensify the cartoonish tech blasts, or strike fear into my heart any more than McDonald’s commercials make me want to buy a burger. Once the smoke clears, Bleu has something more brooding to rap about on “It Ain’t Easy,” ingloriously recollecting his upbringing and analyzing the ills of the ‘hood. It’s such a dramatic change of pace it couldn’t possibly belong, yet it feels completely necessary. Next to the rehashed club tracks and exceptionally tiresome gangsta cliche, it’s the ultimate hypocritical compliment. For the only instance on the album, Bleu breaks the norm and actually examines his own sensory and perceptual experiences. In the end, he still finds time to tell “rat-ass niggas” to eat a dick and die. Shame.