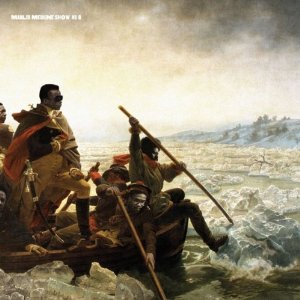 A friend of mine recently asked me to recommend some sixties jazz to her. It was a daunting question. Where do you start? There are so many great jazz records from that period, it’s hard to pin down just a handful to begin with. You need some John Coltrane, some Miles Davis, some Ornette Coleman, some Mingus, a little Herbie Hancock for good measure, and maybe some Pharaoh Sanders and Sun Ra to round things out.

What my friend should do is pick up Madlib’s newest mix CD, titled “Advanced Jazz.” As with all of the even-numbered volumes of Madlib’s Medicine Show, it is a trip through his vinyl collection curated, by the beat konducta himself.  The song titles tell you all you need to know: “Miles,” “Ornette,” “Pharaoh,” “Herbie,” “Mingus,” “Ra,” “Dolphy,” “Ranelin,”” Deodato,” “Coltrane.” All are well-respected jazz musicians who made important records in the sixties and seventies. As the title suggests, the disc is a master’s class in jazz.

Not that it is boring and academic. The album is full of weird samples, promos for blaxploitation films that don’t exist, Melvin Van Peebles routines, public service announcements for marijuana, interviews with jazz musicians, and poems. In other words, the typical Madlib oddities. As with the other mix albums in the Medicine show series, the disc is divided into tracks that contain portions of several songs clipped together. Madib isn’t concerned with curating a cohesive listening experience. The songs ramble about, mix into totally unrelated songs, and the whole album lumbers along on it’s own trajectory. This is Madlib’s trip, and he’s more interested in following his own whims than in creating easy listening background music.

At times it’s a challenging listen. My wife makes me take it off every time I put it on. There are squealing sax’s, unsettling rhythms, and a lot of general weirdness and mayhem going on. The Mingus section starts off with several minutes of what sounds like a trombone farting. You are not going to get laid with this record on. Another issue is that jazz songs are best appreciated in their entirety, preferably live. Hearing a few minutes of a ten-minute long jam doesn’t really do it justice, and hearing all of this great music in bite-sized samples is a little unsatisfying. It made me dig out my jazz records so I could hear the music as it was intended to be heard.

Despite the occasional dissonance and spoken-word samples that go on to long, “Advanced Jazz” is still a worthwhile experience for anyone interested in jazz. There are no credits given, but from what I could hear each track features work either by the artist in the title, or at least in the style of. Madlib digs deep, bypassing well-known material and getting into more obscure cuts. You won’t be hearing “Giant Steps” or “Round Midnight” here, but you will be treated to excerpts of a wide range of sounds, from more traditional jazz to hard bop to fusion to funk.

If you are into jazz or curious about what all the fuss is about, pick up “Advanced Jazz.” It’s a mixtape from an expert of some of the best of the genre. At the very least it is a useful jumping-off point into jazz. Madlib hasn’t created the smoothest listening experience, but he does drop some serious knowledge, and is this disc is another worthwhile entry into his Medicine Show series.