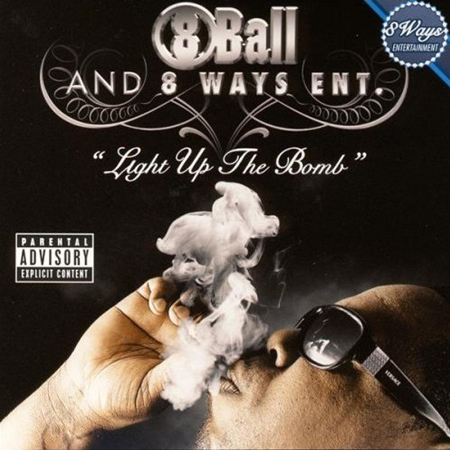 Relatively speaking, 8Ball is to Memphis as Common is to Chi-town. They represent the upper crust of their respective fields, and have since a lot longer than your average. How long’s it been? “Comin’ Out Hard” hit the circuit in ’93, right beside “36 Chambers” and “Midnight Marauders,” and even before seminal NY classics “Illmatic” and “Ready to Die.” Since then Common has lost the “Sense,”, the Wu are a dysfunctional family, and Q-Tip’s resorted to doing intros for guest appearances. Things sure have changed, but 8 Ball’s still here, fittin’ to get his swerve on.

Not unlike Common, 8Ball’s position in his community has remained great, but until recently, nationally underappreciated. Along with a significant increase in sales and a subsequent signing to Bad Boy, 8Ball and partner MJG solidified their stardom with guest verses on ’05’s “Stay Fly” alongside Young Buck and the Academy Award flossin’ Three Six Mafia. Add everything up and the status of “Living Legend” sounds more substantial than at first, if not less ridiculous.

Let’s be real; 8Ball’s argument for “living legend” isn’t the same as Jay-Z’s; his acapella tracks will never knock socks off, and were never supposed to. Rather, he’s spit his southern game from the same brand clip Mike Jones has, only at a larger caliber and over a “legendarily” lengthy tenure. On “Light Up the Bomb” nothing works to tarnish his legacy, but by no fault of his own he fails to cement it any further. Don’t be fooled by the cover art (easily confusable for a solo LP); it’s more or less a cohesive mixtape for 8Ball’s lil’ homies to stomp on. With “Ridin’ High” pushed to 2007, fans still have little to hate on.

The story goes something like this: when 8 Ball (or any of the A-list guests) hits the mic, everything’s hunky dory. When the “almighty” M Gang (ahem, G-Unit anyone?), step to, it’s utterly been-there, done-that monotony. Of course, in a club where lyrics are as relevant as sobriety, this certainly doesn’t matter, but even with minimal deciphering required, “Light Up the Bomb” remains frustrating to listen to. On the one hand, your casual M Gang listener (myself) will have little idea who’s rapping and when, and furthermore won’t appreciate the foot-in-the-door 7:11 intro. None of 8 Ways’ featured artists necessarily bore, but they all have yet to grasp what their predecessors have. Don’t even dispute it; 8Ball and MJG ARE on “Another Level.” They’re hardly great lyricists but their swagger makes them iconic. As such, the 8 Ways rookies lack the experience needed to captivate on this plateau.

8Ball doesn’t push his game overly hard, but the best tracks are decidedly with him pushing something. “Battle Field” is a sub-Mason-Dixon Line wet dream with guests Dirt Bag and Bigg Gipp impressing (“I try to be a role model, but bitch I be a Dirt Bag!”), and fans will take in every bit of the all-8Ball title track (“ATL strippers hate me ’cause I don’t make it rain”). Juvenile clearly steals the show on “The Greatest,” further solidifying his status as criminally underrated: “my grandfather used to say ‘you better reap what you sew,’ if he was here to see me, telling my seeds what I know!”

Montana Trax provides the 8 Ways boys with bushels of party-moving, MTV-friendly crunk beats, but the screechy synth loops continue to gasp for air on their way towards the exit. “This Ain’t That” is Montana doing DJ Quik, with wammy funk guitar dancing to a crunchy, snaking bass line. Ever-fresher is MJG’s hyper throb on “Yo Bitch,” taking a page from “Stay Fly” for a sure-fire club smash.

Three very unnecessary skits aside, “Light Up the Bomb” houses plenty of crunk to hold attention, a steep 57 minutes over 12 songs. If it ain’t enough to hold you over ’til the real thing, refer to the 8Ball/MJG catalog. It is legendary, after all.