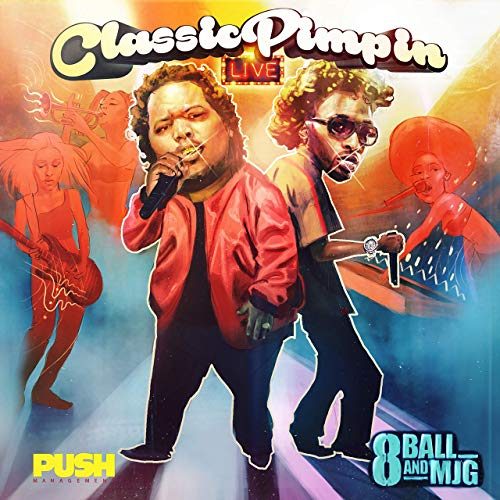 “Classic Pimpin’ (Live)” snuck up on me. The last 8Ball & MJG album “Ten Toes Down” came out almost ten years ago. In the interim both artists had released solo albums like “Life’s Quest” in 2012, but it otherwise felt like the group was on an extended if unintended hiatus. Speaking personally for a moment that was disappointing to me as I’ve long considered 8Ball & MJG to be one of the most underrated and overlooked Southern rap acts. While OutKast lapped up the critical acclaim and UGK fans still continue to mourn the late Pimp C, both of those groups have been inactive longer than Ball & G yet seem to get more love in the mainstream.

In that respect “Classic Pimpin'” is a love letter to all of the people who ride for the Orange Mound duo from Memphis. Unfortunately with no publicity before this album dropped in January and no press kit to accompany this review, I’m a bit perplexed as to how this release came about. I can’t even tell you when and where the concert that this album was recorded at took place, although I CAN tell you that it was clearly well mic’d and mixed with the end goal of producing an album in mind. Songs like “Lay It Down” sound just as good live as they do in their original incarnation; actually, perhaps a bit BETTER because it’s got a raspier quality to Ball & G’s vocals from performing live. This isn’t sipping tea between studio takes y’all — it’s that raw down and dirty sound that’s exactly what a rap concert should be.

There’s never been an official “Greatest Hits” album for the tandem before now, but “Classic Pimpin'” comes pretty close. All of the songs I would have selected if it were up to me to pick the set list are represented here. The epic cinematic “My Homeboy’s Girlfriend” opens with an 8Ball verse recounting a tale of betrayal between G’s that’s going to lead to a climactic conclusion. The hip-hop classic “Space Age Pimpin'” translates the duo’s Southern-fried style to newcomers perfectly, as a group that’s always been about their suave mack 1970’s game, perfectly suited to bring it from the disco and funk to the modern day. And speaking of THE FONK, it doesn’t get any flyer than the O.G. anthem “Comin’ Out Hard” complete with Rufus & Chaka Khan samples that just put you in a laid back state of mind (with or without the herb).

If I had to complain about this album, not that there’s really much to complain about, it’s that Ball & G have a catalogue far deeper than one concert or 12 tracks can cover. As far as the selection and the mastering of the music goes, there’s not anything to nitpick. Every era of their career is covered from Suave House to Bad Boy South, and while they haven’t been consistently pushed or promoted by each of the labels they’ve been with, they’ve never changed their ways to become more mainstream. As 8Ball himself puts it on the Biggie sampling “Relax and Take Notes,” they’re two Memphis boys who the girls say are “country talking” and “sound funny.”  The only funny thing to me is that they don’t get the credit they richly deserve as Southern rap legends.