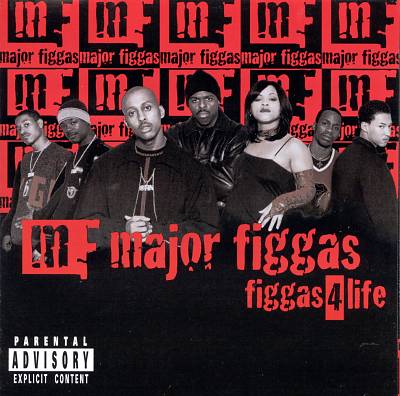 For all of you who don’t know (which I am assuming is most of you) Major Figgas is a group of Philly born rappers. Most of them have their own solo/group deals now, but this was their first retail CD. A few CD’s and tapes before this on the streets of Philly caught the attention of RuffNation Records, the company that would eventually be driven into the ground by unexpectedly low sales from the MF debut. Their original “on the streets” flow was nice. It was hard. It was what I like in a Philly rap group. Then they after they copped the deal they totally redid the flow, and seemed to jump on Jay-Z’s dick in an ill planned attempt to copy his success.

Before I really get into this CD, I want to clear up the heavily distorted rumor about Major Figgas, Jay-Z and State Property. Shortly after Beanie Sigel’s abrupt signing to Roc-A-Fella, Beanie and MF did a few tracks together, three or four that I can think of off the top of my head. Sorry Beanie fans, they’re not on any retail CD, but any die-hard MF fan (like myself) could tell you they were hot. Shortly after those songs hit, Beanie asked Jay to give MF a guest appearance on one of the God MC’s albums, so that they would get props and fame.

It was a pretty big risk for Beanie considering he went from the hustling the streets to making demands on arguably the best rapper in the game like that. For whatever reason, Jay-Z accepted and made an offer to the Figgas to be on a track for Jigga’s fourth CD, “Volume 3: The Life and Times of Sean Carter.” The actual amount Jay offered to MF to appear was never disclosed, but it was described as “not enough to cop a DeVille” and the Figgas thought they were worth more than that. Jay understandably considered it a diss that this group from Philly who only sold 10,000 copies of their retail CD wouldn’t wanna be on the same track as the God MC. Jay then recorded the track “Do It Again (Put Your Hands Up)” which Jay and Beanie diss MF, NOT JADA like a lot of people say. It’s about the Figgas.

So that was the beginning of the biggest beef in Philly, between Major Figgas and Beanie Sigel/State Property. They blew their chance to be the next Roc-A-Prodigy and these guys are what the current State Property was supposed to be. Keep that in mind as you listen to some of their shit. If you’re lookin to compare Major Figgas with the present day State Property, don’t use this CD as a testimony to MF. It is really low quality work for them. It puts a downer on the MF history with most of the beats being weak attempts at club bangers, and their lead single “Yeah That’s Us” shining as arguably the worst track off the album.

Some strong hard tracks like “Is It My Style” and “It Ain’t Shit 2 Us” really embody the Figga philosophy. If they made the whole album of this hard style they would have moved more than 10,000 copies. “The Crack” is a comical discussion between Gillie Da Kid and Spade who are crack and coke. A hard beat helps add to the pleasure of the track.

Sadly though, the ill attempt at club hits and womanizing gangstas really isn’t what works for this group. Members Dutch & Spade dropped the games and went gangsta, resulting in a deal as the front runners of Untertainment. Ab Liva is already halfway done his album for Aftermath Records, and from what I heard of it expect it to be hot. Gillie Da Kid copped a deal with Cash Money and he has his CD scheduled for late summer/early fall 2002 release. The group has tremendous talent as a unit, with some weaker members that get lifted by the strong lyrics of others. Just makes you wonder what if they HAD accepted that deal with Jay-Z.