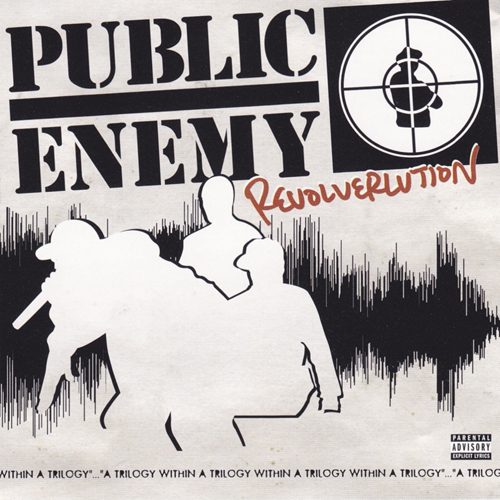 “Face it; tell me why these fans be hatin
the present state of the, hip-hop nation
Maybe it’s your President of the corporation
that’s, why we in this – situation” -> “Revolverlution”

Never afraid to call it like he sees it, Carlton Ridenhour will call shots on anybody responsible for what’s fucked up in America, in rap music, or anywhere people of color live. That’s the history and legacy of the artist behind one of the most politically AND musically important groups of the 20th century; Public Enemy. Having not released an album of new material since 1999, a new album from the Godfathers to political rap was unexpected, but definitely long overdue. Back in full force, Chuck’s definitely not taking any shorts or fearing to say what’s on his mind; but then, what else could you expect?

“Tycoons; damn I’m tired of these coons
Rappin in circles, words can either help you or hurt you
A be-neutral cat still might shoot you
What suits you if you got issues, a thousand tattoos
Confused with two-hundred dollar gym shoes
Spendin more than you got, 2002 blues
Give it up; turn it loose – ain’t no use
The rest of you, screamin rescue me from the residue” -> “Put it Up”

The shrinkwrap for P.E.’s “Revolverlution” touts this album as being “Brand New P.E. Material” plus “Special Remixes of the Classic Joints.” If you’re a long term Public Enemy fan, don’t get excited about the latter too much. This album doesn’t include the Pete Rock remix of “Shut Em Down,” but it does have DJ Functionist’s “Functionist Version” of the song. Who? I don’t know. You won’t be blown away by “The Moleman Mixx” of “By the Time I Get to Arizona” either – it loses the whole classic rock guitar mix that made Chuck D’s indignation about no state holiday for Dr. Martin Luther King, Jr. so relevant. There are five of these remixes total, all of which will be an odd curiosity to anybody with the complete P.E. discography. To those same fans, here’s my advice: all six remixes which appeared on “Greatest Misses” are more important than these; so if you don’t own that album (some call it an EP) run out and get a copy.

What’s really important here whether you’re a Public Enemy neophyte or the hardcore follower with their sihlouette logo tattooed on your arm is the “Brand New P.E. Material” that you’ve never heard before. A lot of supposedly loyal fans of Flavor Flav and Chuck abandoned ship in 1994 when Public Enemy moved away from the Bomb Squad sound and dove headfirst into reinventing what a P.E. record should be. Those people wouldn’t recognize the now sound, but the now sound is far from the whack. It’s not driven by a James Brown drum or the soulful sounds of Stax; in fact if you can pick out a sample in their new work more power to you. Live and kinetic is today’s Public Enemy, a power fusion of rap and rock that unlike Limp Bizkit or Kid Rock puts the rap FIRST. What the old heads WOULD recognize is that Chuck D hasn’t changed at all. At times he was dubbed “the most angry black man in America” by a press that had little understanding of Chuck’s issues and doesn’t even today. If you listen to “Son of a Bush” though, you’ll get an idea:

“Oh no! Struck by greased lightning; effed by the same last name
You know what? China ain’t never givin back that God damn plane!
Must got this whole nation trained on some kennel rations
Refrain; the same train, full of cocaine, goes the brain
Have you forgotten? I’ve been through the first term of rotten
The father, the son, and the HOLY BUSH SHIT we all in
Don’t look at me – I ain’t callin for no assassination
I’m just sayin, sayin, who voted for that asshole of yo’ nation?
Deja Bush…”

The more pissed off Chuck gets, the happier you’ll be – and if 1999’s “There’s a POISON Goin On..” proved anything it’s that Chuck is still mad as FUCK. While the rest of the nation blindly follows George Jr. into economic desparity and war on the entire Persian Gulf, Chuck D does the most American thing he can do – question everything. The true right every American has and every citizen of this world SHOULD have is to question their own leadership; and thank God for an irate Chuck D who is not afraid to say “ain’t that a BUSH.” You might say it’s anti-American, but listening to Chuck D question blind obedience to your country, corporate greed, political double-dealing and covert racism makes me PROUD to be an American; where at least I know I’m free to examine our values.

If this is too serious for you never despair, Flavor Flav is still around to provide a lighter side to Chuck’s heavy rhetorhic. “Can a Woman Make a Man Lose His Mind?” Maybe THAT’S the reason Flav has been so crazy all these years. It’s the only solo song Flav has on the whole album, but Professor Griff also gets his own shine on “Now A’Daze” and “What Good is a Bomb.” All of these original songs are sandwiched around the aforementioned remixes, several live performances, and a few throwaway tracks like two “Public Enemy Service Announcements” whose only description in the liner notes is “Recorded in the Early 90’s.”

The two interview cuts included on this CD wil be of historical note to the old school P.E. fans, but probably be skipped over by everybody else. What’s the overall perspective though? There are plenty of good reasons to own this album, and those P.E. heads who stayed down over the years won’t be dissapointed by the new songs like “54321… Boom” and “Get Your Shit Together.” Anybody new to Public Enemy might wonder what the fuss is about, but when Chuck D says “three radio corporations own all them so-called black stations” or calls UPN “you pick a nigga” be on alert. Ignoring the unimportant remixes, this is an overall very solid Public Enemy album. The truth hurts, and P.E. is back to bring the pain – I’m glad it still hurts so good.