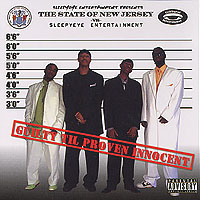 I’m surprised that Sleepyeye Entertainment even finished an album. I only say this because they have gone through so many disheartening truths and problem after problem with their artists, but have still managed to come out with a fierce Jersey album in “Guilty Til Proven Innocent.” Beginning Sleepyeye Productions in 1994 in their grandmother’s New Jersey home, Tom ‘T-Black’ Freeman and his cousin John Scott made the first beats and initial mixtape with hopes of only expanding to the masses. Unfortunately, the dream did not hold up, but was later revived by starting a promotional company as Sleepyeye Productions was now Sleepyeye Promotions. Wanting to take it to another level, T-Black and long time friend, Aaron ‘Big Rim’ Bright began seeking artists to manage. Eventually in Burlington City, they found T.N.T, a three man group composed of T. Streets, N.U.T. the Life, and T-Boogz. As the first signed artists to Sleepyeye Entertainment, things were suddenly put on a hold again as N.U.T. the Life faced a ten year sentence in jail, right before the release of his solo album and G-Dollaz, another signed artist, was getting locked up for drug distribution. Fortunately, Sleepeye managed to find other artists such as Prime on beats and lyrics and a young 14 year old battle rapper named Traffic to step and hold it up for the crew.

After knowing that N.U.T. the Life was sentenced for alleged car jacking right before finishing his solo album “The Real Life,” it makes sense to see so many of the tracks address gangs, violence, and drugs. Then again, some of the tracks that touch upon the struggles of life and violence are some of the weakest in the album. I figured that as life changing situations, these tracks would stand out more. “What the Hood Made Me” reminded me of Mike Jones’ “Back Then” with a low, monotonous voice for the hook, while “Make Money” was unimaginative with its generic talks about hustling and taking money through any means. A very repetitious “Don’t Want That” reiterates the same phrase in every other sentence, as the lyrics appear as though they’re from an amateur with simple lyricism such as, “So you can keep on acting tough, I got something for you acting up, but you don’t want that.” Also, it was difficult to get through five minutes of “King” as Prime incessantly prides himself as the boss, king, etc. I got the point after the first hook after hearing, “I be the king, I be the boss I call the shots, I do everything.”

At the same time, “The Heist” is yet another track about drugs and violence, but in a particularly clever way, is set up as a dialogue between N.U.T. the Life and T-Boogz with trumpets blaring in the background over a slow tempo. In its entirety, the whole track is a discussion about hustlers that were raided and the elaborate plan to hold up the police station that is keeping the seized stash in question. It was nothing, but amusing to hear the meticulous plot gain yet another reserve. Also in a more witty track, “Boy vs. Girl,” personifies drugs as a girl as T-Boogz and Traffic professes,

“What you know about ol’ ‘girl,’
That soft white fuck up your whole world
Your nose get numb and your toes curl so real
Well let me tell you what happens with powder
Sniff a line bet you’ll be back in an hour”

Despite the tracks about drugs and making money, I am surprisingly impressed by the rest of the tracks Sleepyeye has to offer. Most of the tracks offer a glimpse to the progression and survival from the hardships once learned. Although somewhat overdone, the common theme of living a nonviolent life and progressing forward which is present in many of the tracks, still drew me in because of the distinct lyricism and beats in each. Both musically and lyrically, the rest of the album runs the gamut of subject matter and introduces a variety of beats to keep the listener entertained. Some highlights of the album include “How We Do In Jersey” as an anthem for the east coast, Jersey marauders to represent their roots and surviving life regardless of all the negativity that one is surrounded by is shown in a 70’s sampled “Do Ya Thing.” With a high pitched voice singing the hook over a soft piano and hard bass, “What I Gotta Do” shows the sacrifices in music and the rap game as it remains unclear why and “what I gotta do to make the streets love me.” Although “I Cry Out” sounds like a slower version of “What I Gotta Do” with strings replacing the piano instead, the message is still clear about calling out for help while there is no one to hear the cries from those such as hustlers and gang affiliates.

Although almost ironic after rapping about hustling, heists, and dealing drugs, “United We Stand” addresses the need for more compassion towards nonviolence and digression from drugs and is refreshing to hear a track with a positive message, with inspired lyricism from T-Streets as he says,

“Cats like to think that this young generation only raps
about guns, killing, drug dealing, things of that sort
This real right here, this came from my heart
United we stand, divided we fall
If we aint in this together we wont make it at all
This aint the land of the free and the home of the brave
It’s the land of the thieves and the home of the slaves
To my niggas standing on the corner hustling hard
To my single baby mamas steady hustling jobs we make it in this cold world
We gotta stand strong keep your head up to God and you’ll always live long
Come on”

After the long journey to reach to this point, the lyricism that amazes the masses and beats to bob a head or two, still keeps Sleepyeye Entertainment resilient as ever as they have much to look forward to with a new chapter in their Jersey books and hopefully this time around, will end better than the first did.