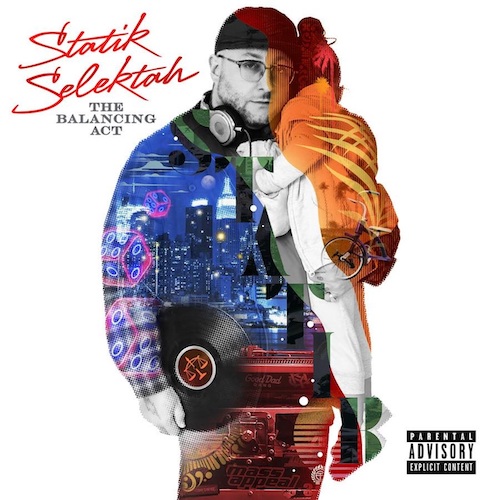 I wouldn’t go so far as to say that a Statik Selektah album is anticipated like the 1st and 15th of every month, but I will say that his releases are usually worth checking out. He remains one of the few mixtape DJs out there who are prolific at their craft. His albums are usually like films, and Stat is its director, producer, and casting agent: He’s got a vision for what he wants to do, is sufficient with financing, and usually enlists a cast of people who both he and his audience know put in work. Granted, he often works with some of the same people, but it’s not an impediment. The same way DJ Clue had Fabolous? That’s the same way how Statik Selektah has Joey Bada$$ (though, technically Haile Supreme’s got him beat just by having 3 appearances on this record to Joey’s 2). He’s named his latest album “The Balancing Act” which implies a degree of competition, but not necessarily among the rappers he’s enlisted.

In the metaphoric definition of a balancing act, it’s partly defined as obligations competing against one another for completion. As the cover indicates, Stat has new duties in his life, he’s got the music and fatherhood. He keeps it relatively simple on this album. Like usual, he keeps his tracks mostly under a 3-minute length with songs rarely reaching a 4-minute plateau. Black Thought starts off the album with “The Healing”, which contains hard drums and atmospheric piano keys. It’s not a freestyle, but Black Thought’s intensity makes it sound as such. The aforementioned Joey Bada$$ makes his two appearances on “Keep It Moving”, which features Gary Clark, Jr. and an overshadowing verse by Nas; and the solo track “Watch Me” where his only competition is himself. Stat’s no stranger to posse cuts either, starting with the grimy “Play Around” featuring Conway the Machine, 2 Chainz, Killer Mike, and Allan Kingdom. It was Mike’s rapid flow delivered with distorted vocals stole the show:

The group tracks continue on “America Is Canceled”, which sports a dark and gritty beat for Termanology, Jadakiss, and Styles P. to rap over. Of the three men, it’s Termanology who raps the hardest. “No Substitute” features Paul Wall, Benny the Butcher, and Brady Wyatt. The Butcher boasts, “I multitask when I’m cooking the dope / With one arm in the pot and one foot on they throat” with a delivery just as tough as the horn-driven beat. Stat provides a light and smooth beath on “Hard Living” which features Dave East and Method Man, who does his thing on the mic as expected. Stat also has a tendency for including emcees on his albums who can be considered the “odd man out”. In this case, it’s Jack Harlow. The Kentucky emcee makes an appearance on the low-key boom-bap track “Time”, which has DJ scratches and lush vocals for the wistful theme contained in the lyrics.

Haile Supreme is almost like Stat’s Nate Dogg in how he provides the hooks on three different songs. The first of which is “Off My Mind”, which contains markedly hard snares. As far as the rapping goes, Rome Streetz is on some unabashed NYC shit talking while Fly Anakin, with his vocals, sounds like a more determined Westside Gunn. “Welcome to the Game” features Marlon Craft and Kota the Friend, but the beat just feels weak. “Way Up” is a head-nodder for certain as Bun B bigs-up the late Pimp C while Havoc does the same for Prodigy. Stat creates a west coast affair with Blu and Evidence over a soulful gospel beat.

The gospel sampling continues on “No More” featuring the boisterous Lil’ Fame, Smoke DZA, and Rim Da Villin. The crime detailing “Balance Beam” is the only track that coincides with the album title and features CJ Fly, JFK, and Nick Grant. Bobby Sessions and Harley Harl close out the album with “Immortal”, but before that, we get a posthumous appearance by Sean Price on “Ralph Lauren’s Closet” with Thirstin Howl III also included. With “The Balancing Act“, Statik Selektah continues his soulful boom-bap that consistently attracts the right talent to spit over them.