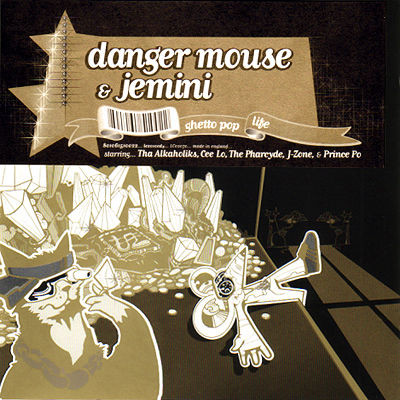 DJ Danger Mouse was never built for fame, but he asked for it. After crafting what should remain the most controversial and intriguing remix album on the planet, executive producing for a crew of multi-platinum cartoons, and joining forces with the underground’s revered “it” guy, it is but natural progression he become the “it” producer. Since chucking the smash hit “Crazy” at an unsuspecting public as half of Gnarls Barkley, Danger has indeed become a household name. Or at least the silent guy that stands next to Cee-Lo.

What’s really remarkable about DM’s success is not only how his style has survived in a crunked, snapped, and hyphied-out era, but that it’s really and truly thrived. He’s responsible for pushing millions of units; a feat producers with his mentality and background simply never dream of. But it makes just enough sense; Danger Mouse had always been a cut above the majority of underground beat makers; all he needed was a partner to push him through that threshold. And partners he’s had, from Jay-Z to MF Doom to his most recent work with the aforementioned soul machine, but it all started off a little smaller.

At the time of “Ghetto Pop Life’s” release, Danger Mouse was no secret, and the impressive list of guest stars is plenty proof. Tha Liks are in prime form for “What U Sittin’ On,” Prince Po gets his waltz on for “Copy Cats,” and the Old Maid pimp J-Zone still won’t give it up to Britney on “Take Care Of Business.” Handling most of the vocal duties by his lonesome, emcee Jemini The Gifted One has little trouble rocking an altogether outstanding selection of beats.

Jemini certainly has the charisma to handle whatever’s thrown at him, but his enthusiasm doesn’t always make up for his lack of subject matter. After all, the chorus for the album’s lead single does chant “I’ve got a lyric I can spit, I’m giving bitches good dick.” All too often, The Gifted One fills his bars making empty claims; “I was born to emcee,” “I”m the son of a king;” generally a lot of “I’m this, I’m that.” Still, his energy is fantastic, and on occasion he even impresses. On “Here We Go Again” he’s a different emcee altogether, tackling serious issues in a depressive monotone: “shorty used to watch the game but now he in it, sling a little cocaine but he didn’t invent it … shorty dream about eatin,’ dreamed of blowin,’ schemin’ ’cause his motherfuckin’ ribs is showin.'”

He can be nice (“a lot of niggas can’t touch me but they still feel me”), but there’s no need to sugarcoat: “Ghetto Pop Life” is a cult hit because of Danger Mouse. “Knuckle Sandwich” writhes with groovy organs and wa-wa guitar, “Born A MC” builds with a John Williams-esque string selection, and the epic title track is good enough to have highlighted last season’s NBA playoff commercials. It’s difficult to settle on Jemini’s pressuring on “Don’t Do Drugs” as literal or sarcastic, but DM’s unbelievable Spanish horns render any message acceptable.

“Ghetto Pop Life” does nothing besides meet general hip-hop standards, but it does so very efficiently and to a particular level of excellence. Along the way, a washed up Pharcyde drop by to ruin an epic “Medieval” piano break, Jemini makes sure he’s “The Only One” to give you “The Brooklyn Shit,” and Danger Mouse foreshadows what would become a distinguished and lively career. For DM fans and breakbeat enthusiasts alike, checking it out is simply necessary; it’s that good.