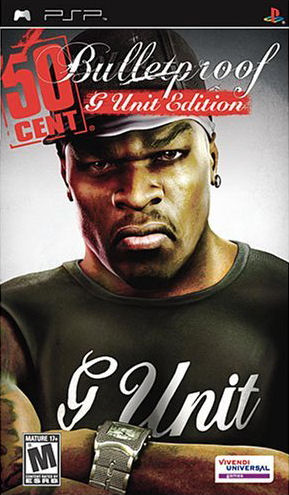 You may be getting a feeling of deja vu reading this review – in effect saying to yourself “Haven’t I been here and done this before?” That’s not your mind playing tricks on you, because almost eight months ago Pedro ‘DJ Complejo’ Hernandezreviewed the ORIGINAL 50 Cent: Bulletproof game made for the PlayStation 2. Here’s a quick summation of his main themes – good idea, mediocre gameplay, not bad overall but probably recommended only for hardcore 50 Cent fans.

It seems the gaming community as a whole was in tune with that assessment, because Vivendi Universal decided it couldn’t hurt to repackage and re-release this game on PSP. I was dead up with the promotions company who wanted to send us this game for coverage: “Are you sure there’s anything to say about this? Pedro already did an excellent review and this is just the same game on a smaller screen.” No they replied, this is the G-UNIT EDITIONwhich means all new features and enhanced gameplay not found in the original title all those months ago. I’m not exactly sure how much they can add on a smaller format disc, no matter how much they compress the data, but since RR is doing the holiday hip-hop shopping list right now we should give a shout out to the portable game playing systems too. Personally I find the PSP kind of bulky for “on the go” gaming and would much rather have a Gameboy Micro on hand for long lines at the post office that slips easily into your pocket, but the PSP as a portable device is still hard to knock. I bought one on launch day and haven’t regretted it since – music and movie file playback, web surfing, and an ever increasing library of excellent games. Maybe “50 Cent: Bulletproof (G-Unit Edition)” can join that list.

Starting up the game and waiting through several long and noisy periods of loading time the title screen simply runs through a set of 50 instrumentals while offering you two options – New Game, and Load Game. Deceptively uninspiring at first glance, the New Game menu is actually four deep with Start New Game, Options, Multiplayer and G-Unit Mobile. Mobile features six song sets and five videos that are already unlocked for your viewing pleasure, ones you had to buy with cash collected in the game on PS2 according to Pedro’s review. While ostensibly this is a dope extra for the G-Unit Edition the video player inside the game is somewhat suspect. You can’t rewind, fast forward, or even pause – you can either start playing the video or stop playing the video and if you stop it resets back to the beginning, and the same goes for the music sets that are available. It should be noted the six sets are actually three times two representing two 50 and one G-Unit album, plus instrumental versions of each in seperate playlists. Nonetheless the game box promises “over 160+ tracks and 16 music videos” so clearly there’s more here than I have time to unlock – you dedicated gamers may have fun getting each and every one.

As for the menu’s other choices, Multiplayer is pretty self-explanatory as it lets you choose a character then either host or join a game. That’s LOCAL game only, so sorry Charlie, there won’t be any run and frag online. Options let you change the volume levels and how bloody the game is, and of course Start New Game is exactly that – you get in it to win it. Selecting this actually gives you a third choice to either play or skip a brief tutorial mode and learn how to play the game. Even if you choose Skip Tutorial youSTILL have another choice – the difficulty settings ranging from Punk (Easy) to Gangsta (Hard). Did P have to make that many decisions just to get started on PS2? There needs to be a menu option for “fuck all the bullshit, start now.”

The gameplay itself is fair as it reminds me of a top down Hunter: The Reckoning type perspective, but if anything LESS accuracy when it comes to aiming and hitting targets. In Hunter this wasn’t too bad since the game lends itself best to multi-player sessions anyway, but soloing on Bulletproof you’ll soon regret that the PSP only has one analog stick. You use it entirely to move and not to aim, and you can’t even choose to move with the crosspad instead as that just pulls up a menu of different background songs you can listen to. Something about being realistic and having a limited number of shells in your gat at the start is appreciated, other than the fact it’s not immediately obvious how to replenish them and with the poor ability to aim other than the direction you’re moving in you’ll quickly run out of artillery and be forced to use your fists, which results in many assailants giving you a HP beatdown. You’ll get the hang eventually, but it’s tedious and unpleasant at the start and may turn off some people who are interested in the concept of a 50 Cent video game.

Now I’M getting deja vu, because this sounds exactly like what P said about the title on the last console go-around. Nonetheless the box does continue to promise extras not found on the PS2 version – an exclusive documentary, the ability to customize your music playlists, and the opportunity to customize your on-screen persona with authentic G-Unit clothing. I can see the first or second of those three being worthwhile incentives, but has anybody bought a game just because of the wardrobe choices other than those Animal Crossing die-hards? 50 looks thug in whatever he’s wearing to me, and I wouldn’t care if his wears in the game were “authentic” or not. Gameplay is all that really matters in the end despite the extra bells and whistles, which add a modicum of value but don’t really solve some of the controller issues that feel even more handicapped on a portable system than they might have otherwise. There’s some meat to the “50 Cent: Bulletproof (G-Unit Edition)” but you have to chew through a lot of gristle to get to it. Recommended as a bargain title or possibly a greatest hits release if it gets that far on PSP, but questionable if you’re paying $30 and up.