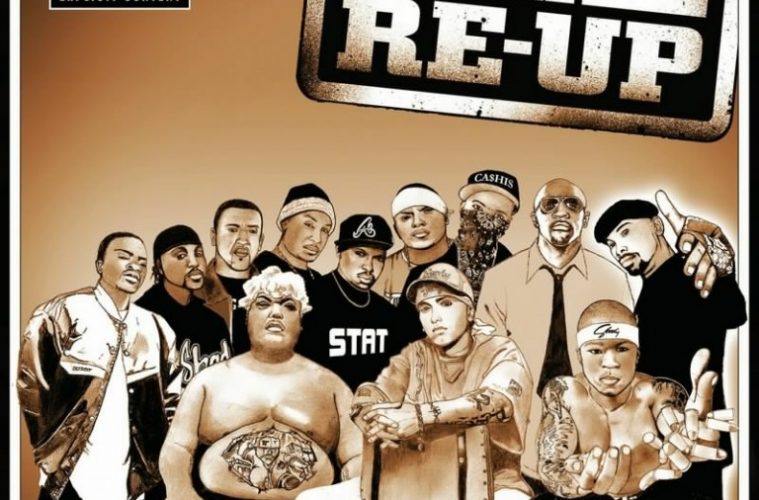 If you thought Eminem was going away for good when he made his Curtain Calllast year, think again. It’s abundantly clear from both the lyrics and the title of the self-produced opening track that Eminem has one thing to let everybody know: “We’re Back.” This is as close to a new Eminem album as hip-hop will get; it’s clearly his project and he stars on a majority of songs but the emphasis on WE here is correct. Perhaps the best way to describe the album is as a Shady Records mixtape, which instead of being bootleg or sold only on tour has been given the official stamp of approval by Em’s record label and distributed by his parent label Interscope. In fact on the “Shady Narcotics” intro Em not only reintroduces us to the cast of “The Re-Up” but informs us two new artists have joined the family – one named Bobby Creekwater and one named Cashis. The latter of the two can be heard on the quasi-official internet leaked single “You Don’t Know”:

“Pistol play ricochet, see where the victim lay
Slumped over bleeding J.F.K.
A.K. ’til your chest plate cave
I’ll ride to the death, do you rep that way?
Forever I’ma be a Shady 7-4 gangsta
Plus I’ll survive everything you got in that chamber
I thrive off of danger, jumpin in all beef
You keep talking shit now the squad called me”

Cashis has been hyped up as the first West coast rapper signed to Shady Records, but to be perfectly honest there’s nothing in his vocal delivery or rhyme writing ability that suggests the star potential Eminem must see in him. Bobby Creekwater’s rugged Southern flow seems a little more poised to blow on his solo track “There He Is”:

“An executive mindframe, fuck tryin to rap
Niggaz represent a corner, I refined the mind
Artesian water, this is flow untapped
And rep for ’em like Mike on playoff night, that’s if the payoff right
The dream team, Bobby Creek, Em, 50 and them
We run the city like Diddy and them”

A fair share of the album features remixes of Shady Records family classics you’re well familiar with. There’s an Obie Trice remix of “Pistol Pistol,” a remix of Akon’s “Smack That” featuring Stat Quo and Bobby Creekwater, an Eminem remix of 50 Cent’s “Ski Mask Way,” a “Shake That” remix with hella Shady members on it, and a specifically Shady Remix of Obie’s “Cry Now.” There are some wholly original songs though, including Eminem’s closing solo track “No Apologies”:

“In my mind I’m a fighter, my hearts a lighter
My soul is the fluid, my flow sparks it brighter
But arsenic writer, often with arth-er-itis
Carpel-tunnel, Marshall with start shit-itis
Hard-headed and hot-headed
Bull-headed and pig-headed
Dick-headed a brick, a big headache I’m sick
Quick with it for every lyric spit it
There are 6 critics who wait, for me to slip with it
So quit this dynamite stick, bury the wick
Its gonna ex-plode any minute, someone will tick”

Eminem’s projects for other members of his crew are often both hindered and hampered by his production style. He has that dark menacing dirty Detroit style down to a tee, but ofen becomes trapped by his own formula to the point all his tracks sound the same. Songs like Bizarre & Kuniva’s “Murder” or Swifty McVay & Mr. Porter’s “Whatever You Want” exemplify this problem – they’re unquestionably and monotonously hard. Even though the latter is actually produced by Witt and Pep, it sounds perfectly in step with Eminem’s own beats, for worse or worse. Still there’s plenty to enjoy on “The Re-Up” including tracks like “Trapped” from the late great Proof, solo joints by Stat Quo like “By My Side” and the Alchemist produced “Tryin’ Ta Win,” and deadly funny duets like “Jimmy Crack Corn” between 50 and Eminem. Much like the mixtapes you find on the market today “The Re-Up” suffers from being too long and having too much material instead of keeping things to a reasonable length and focusing on more quality material in that shorter period of time. This one won’t dissapoint Eminem, Shady or G-Unit fans, but it also won’t blow them away.