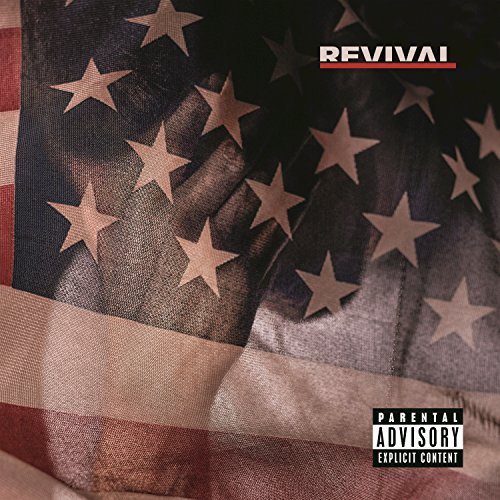 After seeing Eminem’s “Revival” on so many of our Year 2017 in Review lists, I decided it was time to take on this review. It’s not as though I had a sudden revelation that covering a new Eminem album was overdue. The album dropped in December so it’s not “long overdue” as such, but I’ve still been counting every day since it came out knowing we needed to make our statement about it. My own perceptions were being tainted though by the reception on social media, with so many of my friends and peers complaining about the “mature Eminem” and the “sober Eminem” not being fun to listen to any more. Eminem even addresses those concerns in the song “Walk On Water” featuring Beyoncé, and to be honest accurately predicting the reception both the song and album might receive in some corners of his fandom.

“The only one who’s looking down on me that matters now’s DeShaun
Am I lucky to be around this long?
Begs the question, though
Especially after the methadone
As yesterday fades and the Dresden home is burnt to the ground
And all that’s left of my house is lawn
The crowds are gone – and it’s time to wash out the blonde
Sales decline, the curtain’s drawn
They’re closing the set, I’m still pokin my head out from behind
And everyone who has doubt remind
Now take your best rhyme
Outdo it, now do it a thousand times
Now let ’em tell ya the world no longer cares
or gives a F–K about your rhymes
And as I grow outta sight, outta mind, I might go outta mine
Cause how do I, ever let this mic go without a fight
when I made a f—in tightrope outta twine?
But when I do fall from these heights though I’ll be fine
I won’t pout or cry or spiral down or whine
But I’ll decide if it’s my final bow this time around”

You can say Marshall Mathers is a lot of things, but you can’t say he’s not perceptive. As his alter ego Eminem stands there asking us whether or not it’s time to get rid of the peroxide in his hair, he could pose another question to the fans of Slim Shady — is maturity a bad thing? It’s fun to live your life like the classic Beatnuts track “Psycho Dwarf” for a little while but eventually you get tired of a headache every day of the weekend (or every day of the week) and meaningless relationships fueled only by lust. Or — maybe you don’t if you’re wealthy and can afford an endless string of prescriptions and therapy to numb the physical and emotional pain. That’s the thing about Mr. Mathers that really matters — he could easily afford to be as reckless as his wealth would allow but he chose to do something else.

I’m not here to tell you that “mature Eminem” is undeniably better. If you miss the guy that made jokes about Pamela Anderson, Britney Spears, Tom Green, Christina Aguilera, Mariah Carey, Michael Jackson, et cetera then I get it. Mathers became a pop icon by skewering other pop icons, by showing irreverance and immaturity toward both the living and the dead, and by combining both with a talent for lyric writing and charismatic delivery. He was and still is a once in a generation talent, and rightly deserves the comparisons he gets to Shawn Carter, Kendrick Lamar and Nasir Jones. He also deserves the chance to change and evolve with each album just like they do. People evolve over time and “mature Eminem” could already be seen as early as songs like “Stan” and “Hailie’s Song.” It’s not his maturity or his immaturity that makes the difference – it’s his ability to write and deliver interesting material on EITHER end of the spectrum. In a time and place in AmeriKKKan history where racial politics have never been more divisive, Eminem takes the subject and uses his own head to hammer the nail home on “Untouchable.”

“Black boy, black boy, we don’t get your culture and
We don’t care what our government’s done to f–k you over, man
Don’t tell us your attitude’s a result of that
Balderdash, where’d you get the chip on your shoulder at?
Why you kickin that soda can?
Pull your pants up, we ’bout to roll up and
throw your ass in the van cuffed, you don’t have to know our plans
or what our intentions are, our cards are close to our chest
you better show your hands! And put our minds more at ease
Or get shot in the thyroid, comply or die, boy”

The “Great Blue Wall” would have you believe that everyone behind their ranks is sacrosanct, but until they are able to excise the mentality that Eminem illustrates in this verse, hoods from Ferguson to East Orange to 5th Ward to Compton will continue to eye a uniform with distrust. Eminem’s lyrics whether serious or silly only work if they are paired with stellar beats though, and this is where “Revival” can at times falter. With apologies to the late Dolores O’Riordan I was never a fan of “Zombie” and when I saw Eminem had a song called “In Your Head” I was instantly afraid of what he could have sampled, and deeply disappointed when Scram Jones (a normally reliable producer) was that predictable. The album is a mixed bag of such highs and lows. Just Blaze provides an excellent minimalist backdrop and stirring chorus for Em and Alicia Keys on the POTUS 45 callout “Like Home,” but Rick Rubin’s work on “Remind” rehashes an idea he already did better on “Berzerk,” swapping Clarence Carter for Joan Jett. It’s not even BAD so much as it is UNINSPIRED.

“Framed” is the old psychopathic “scare you for a laugh” Eminem over a track he co-produced with Fredwreck, and it works incredibly well, as does the symphonic arrangement from Rock Mafia and Hit Boy on “Nowhere Fast” featuring Kehlani — a sure fire choice for a future single. I dig DJ Khalil’s work on “Castle” too even though part of me wishes it pounded just a LITTLE bit harder. Rick Rubin’s old school rock aesthetic works better on “Heat,” with crunchy guitars accompanying Eminem’s cocksure flow. He does well with “Arose” too so Rubin is batting above average for his contributions on this album. It’s all hit or miss though and “Need Me” featuring P!nk screams exactly the opposite – I don’t need it. And that’s the shame of “Revival” is that at least a third of the tracks are songs I could do without. The other two-thirds show that whether you love or hate the modern day Marshall Mathers, he’s still as relevant as he ever was.