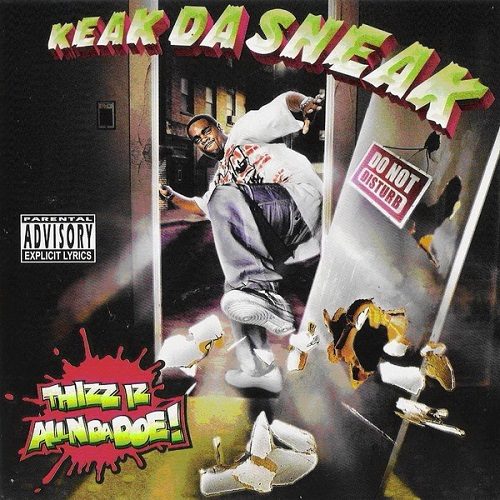 Keak Da Sneak had a breakout year in 2006 thanks to the fact that the movement he is credited as starting, Hyphy, broke out beyond the borders of the bay. For Keak, a breakout year is no small feat considering the man has already been on a major label as part of 3X Krazy and has been a staple in the bay underground for years. Yet, in 2006 Keak found a way to release a slew of albums, appear on a nationwide single, and even pop up for a “Super Sweet 16” on MTV. But if the term “too much of a good thing” ever needed a poster boy Keak Da Sneak would be that man. Keak’s over-saturation came in the form of too many albums released. It’s a problem common to almost every bay star, but it is still frustrating for the average fan. Out of all the albums Keak dropped, it would seem a good bet to at least pick up the one released on the late great Mac Dre’s Thizz Entertainment. Yet, despite the slick album art, “Thizz Iz Allindadoe” is a highly disappointing and inconsistent collection of Keak music.

This album is a disappointment on so many levels it’s hard to find a place to begin. For starters 3-4 of the tracks on the album were released before on other albums. The most notable being the first track “Hyphy” and “4 Freaks” which was on DJ Shadow’s “The Outsider.” For an album that’s only 13 songs long that is entirely too much recycled material. Second, Keak has always been an acquired taste and at times not the easiest emcee to understand but on this album it is taken to another level. The recording or mastering or both are so bad that at times you can barely hear or understand Keak on his own track. Even if Keak was adopting some new super whisper on a track someone during the process should have had the foresight to make sure you could actually hear the man. Nowhere is this worse than on “Again” with Ike Dola. On headphones the track isn’t so bad, but on any system with decent bass you’ll think it’s an instrumental. The track gets so bad when Ike Dola comes in because his voice is too loud and makes it hard to hear the beat in the background. Stuff like this shouldn’t find its way on a retail album.

The rest of the music actually has some highlights that are worth at least a legal download. “Doin’ It Well” finds Keak, Dubee, and The Farm Boyz celebrating their street lifestyle. “My Life” is one of the best Keak tracks I’ve ever heard as Keak gets insightful in a way not common for him:

“I had a fun time growing up, drinking and throwing up
Going on a liquor run, smoking an pouring up
Bad lil’ joker, always found trouble
Put some plastic on they ass, ram it up the gut and never fumble
October twenty-first, nineteen seventy-six
I’m a libra and my skill ain’t bound, yeah
I love heart, hard to let go
Album after album, for free not for the dough
I just love my music, if ever you stressing
It’s a lesson, I can get you through it
I breathe and live like the rest of y’all
Took a trip to Vegas, now its time to shine and throw the ball
Militant baby? Probably
Knowledge of my ancestors, now I’m a stunna
There’s only one, ain’t no two ways around that
Here to stay, if I leave I’ll be right back”

Tracks like “My Life” almost make the rest of the album tolerable, but the technical issues are still too much to overcome. Even with a lack of a breakout hit like “Superhyphy” this could have been halfway decent album. The main problem is that when you have to concentrate on hearing Keak when the beat is 5 times louder than him it takes away from the enjoyment factor.

The result of Keak’s weak effort is that I probably won’t be buying a Keak Da Sneak album for a long time. Maybe if he drops a greatest hits or if I choose to cop his first two joints which I’m sure are official, but otherwise I’ll probably find a way to preview the joint before I drop my hard-earned money. I suggest you do the same for Keak and probably every other bay artist in the near future. If you can’t even trust an established label like Thizz Entertainment to deliver a quality product, then it is indeed a sad state of affairs in bay music right now. It’s no slight as these artists and labels are all very capable of coming out with quality product, but too many times they let the hustler in them get the best of them and over-saturate the market. It’s even more of a disappointment since this CD was meant to celebrate the relationship between Thizz Ent. and Keak’s Allindadoe Ent., but at the very least if you’re unfortunate enough to buy this you’ll be treated with entertaining cover art.