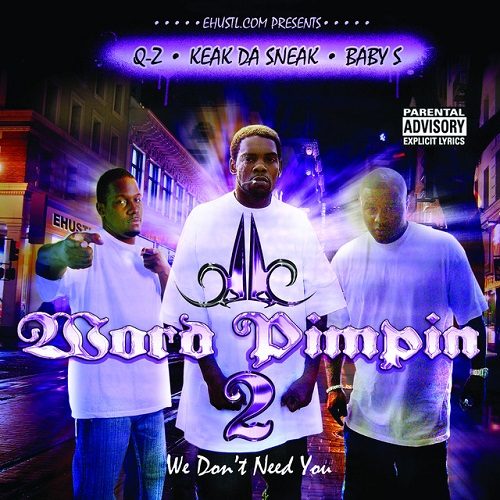 Pimpin’ ain’t easy. See, you gotta organize and coordinate, and most importantly you gotta motivate. Gotta motivate your employees to keep going out there night after night, rain, sleet, and snow – no matter what. You gotta motivate those tricks to take a chance and once you get them to take the first taste you have to make them want to come back for more. Sometimes you’re blessed with a girl who does the work herself, but other times you have to put lipstick on a pig and hope for the best. Ehustl.com is well versed in the pimpin’ game as this is their second time around trying to get you tricks to bite on these words. Problem is, Ehustl.com been pimping some pretty lame words and it has the tricks a little cautious. Last time around, they promised you B-Legit, but seems those tricks paid their money, unwrapped the package, and were unpleasantly surprised. Turns out B-Legit don’t let himself get tricked out for cheap and what looked like a B-Legit solo featured as little as 2 appearances from the savage emcee! Tricks can’t help but feel jaded after such a dastardly bait and switch. Apparently, B-Legit was the draw for a show that featured Q-Z and Baby S. While Baby S goes back to the days of Ruthless Records, Q-Z is as new as new can get. Expecting the experience of a B-Legit and getting the low-level status of Q-Z and Baby S is as shady as shady can get. This time around Ehustl is injecting a little more honesty into the game. They’re up front with their pimpin’ on Vol. 2 as they advertise Keak Da Sneak but let you know that Baby S and Q-Z are part of the package.

While not advertised as a mixtape, “Word Pimpin’ 2” is essentially that. A collection of tracks with low production value featuring various emcees. Baby S and Q-Z are the constants here. Keak Da Sneak shows up for more than 2 appearances and is actually featured on a good amount of songs. Surprisingly, even B-Legit shows up on an interlude giving “Word Pimpin'” a run for its money as far as B-Legit appearances go. Ehustl does deliver the goods more or less this time around, but it’s not all gravy. Take the lead single, “I Choose You,” which is advertised as being featured on a few Cali radio stations. Though Cali always shows local love, a radio hit on an underground album is big right? Not quite. “I Choose You” flips the same sample flipped on the silky smooth “International Players Anthem” which in turn flipped the same sample from Project Pat’s “Choose U.” Ehustl advertised Mariah Carey and after you showed up you realized its Mary Carey instead â€“ not cool. Letting bygone be bygones, I let Ehustl show me the rest of their girls/words. “Monster Words” sounds like the trio’s attempt to jack Kurupt’s rhyme style of putting big words in gangsta raps. Not bad but nothing to motivate me to drop my money. “Don’t Take It Personal” tempts with its silky smooth hook, and bouncy Cali funk, but after Keak’s show stealing verse, Q-Z and Baby S don’t sound that great.

The rest of the album plays this game of teasing you with some of that good â€“good, but ultimately delivering sub-standard product. “Cali Hyphy” might feature the most annoying beat I’ve heard in months. “Cali Girls” sounds smooth, but the annoying singing and resemblance to “Don’t Take It Personal” fades its shine. “Inner City Street Life” sounds like it might pique my interest, but despite the requisite singing in the hook it gets ruined by an uninspired beat. Some songs would do if you’re desperate. “White Teez” isn’t anything new or special, but it isn’t bad. Same can be said with “Shake It Shake It” which isn’t as horrible as the title would seem to imply.

The decision one must make here is whether it’s worth the risk for the return you get. If you’re going to put yourself out there by doing business with some pimps, you better be getting something in return. The stakes aren’t as high as they are when real pimps and johns play their cat and mouse game, but the price of a CD isn’t something to dismiss. If you were really hard up for some Keak, Q-Z, and Baby S, then you wouldn’t be here reading this review. You would have gotten your fix already. More likely you want to know just how good that Keak, Q-Z, and Baby S before you drop your money. Call me a cheap trick if you want, but for my money I’d head over to Amazon and get Baby S “Street Fractions” for a penny plus shipping. Then I’d head over to Keak Da Sneak’s “Deified” and drop a two dollar bill on that. I’d leave this pimp and his employees as a last resort for when I’m completely desperate.