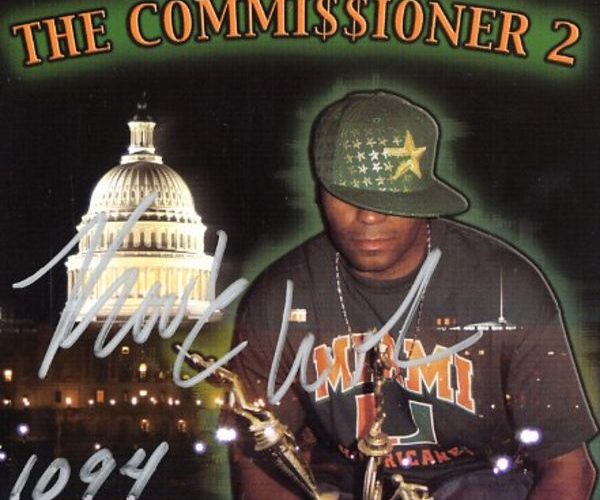 If Kool Keith’s website had a mailing list, a lot of people in hip-hop including this reviewer would subscribe. That’s the only way one could keep up with the prodigious output of albums and side projects Keith Thornton releases other than being a New York, New York resident or owning an online record store like Underground Hip Hop that always keeps his latest joints in stock. It’s not just about keeping up with his workload though – if you’re a dedicated Kool Keith fan or even a curious observer/follower you have to know EXACTLY when his albums are released because these days he’s doing limited editions. Only 500 copies of “The Commi$$ioner” were pressed and by the time it came to my attention they were long since sold out.

Limited edition rap albums – that’s an interesting idea. Usually that’s a gimmick reserved for trading cards, bobblehead dolls and homebrew video games, but Kool Keith has certainly made himself “collectible” by being so eccentric and eclectic over his career. Still for those die-hard fans who missed out on the last volume’s tiny print run or the slightly larger series of 1100 for “The Commi$$ioner 2,” here’s hoping Keith will at some point consider an online digital release. It’s the ideal solution – the ultra-hardcores get a numbered and autographed copy, while the rest can still purchase and hear the album without any out of pocket expenses for manufacturing more discs. Keith’s obviously not opposed to this form of distribution, as a quick search on iTunes by his most commonly known moniker generated 150 hits.

There’s a flipside to this issue though – some limited Kool Keith editions may be so scatalogically bizarre that ONLY the ultra-hardcores would want to own a copy. “The Commi$$ioner 2” may not have received as widespread a release as previous solo albums, but Kool Keith releases like “Spankmaster” “Lost Masters Volume 2” probably would have been better served with a tiny print run. You have to be DEDICATED AND COMMITTED to follow these albums to the end, and that’s not “committed” as in how Keith Thornton was once committed to a mental hospital. Actually come to think of it, it probably helps to be slightly nuts to listen to tracks like “Seattle Tacoma.” The title has absolutely nothing to do with the lyrical content – this is not a song about Washington state.

“Bounce with gator sneaks, handsome good C-notes, the bomb
And vogue ’em out, take ’em to dinner like Don
Shawn know who I am, serve me Grey Poupon
Flavor extra-bration
Mess around you catch a laceration
The voodoo come Hatian the top which he popped maker
You the lagoon faker, I might sign again with a major
Panties gotta be sweet, they can’t come in fishy flavors
Everybody’s gettin big
Mom give me more potatoes
Jump out and train at the gym with an El Ness brim
In the Phantom with the original fantastic Orangemen on my side
that look like rocks, chicks say he’s with Ben Grimm
Ex porn star
Three bottles on ice, look fox he got the rocks
See with the cinnamon, salmon cakes relaxed
I cook on top of your cassette tapes
With Denny’s chocolate”

If you know anything about Keith it’s not going to be a shock that this is one of the more coherent songs on the album. A lot of “The Commi$$ioner 2” is exercises in playing with voice modulation while delivering a stream-of-conciousness flow that barely rhymes let alone makes any sense. As amusing as the idea of Keith “Running for Congress” is, it would have been interesting to actually hear him expound on a political platform of wiping turds on walls and having sex with farm animals; in fact he could easily defend that by saying only an insane man would run for political office in the first place. Unfortunately the only shit smeared anywhere here is on your eardrums after listening to him ramble:

“I’m detrimental to your house like a restaurant
with rat turds on the shelf from sacramental down to the delf
Niggaz like y’all scared of the dark, I told you
You won’t close the door and grab a roll of shit by yourself
And blaze your asshole with two logs of fire
when you spit by yourself, no hiccups and belches
Just grape juice from Welch’s, the brand heat up
On your ass like a horse you felt this
like the bump over your eye become a cyst
Everybody in the vocal booth with a chain around they neck
watch on they arm is on my shitlist
I send a gorilla to put his cock up your ass
You don’t forget this”

Keith knows how to be bizarre and absurd, it comes as naturally to him as loquacious oratorical skill comes to Rakim and Ras Kass. It’s more interesting to hear the rare occasions when Keith has a point and by the standards of his self-produced albums a good track to go with it. “Shit Stains” comes as close as anything on this release. Kool Keith’s obsession with excrement seems evident by the title, but the chorus reveals that he’s actually labelling inferior MC’s as being unworth a toilet wipe:

“I told you before when Trev and Harry turned they ass on me
I fed the boys big steaks, give and ate the best of beef
Toothpicks pluckin dog shit out they teeth
Gruesome gorilla who boo boo girls bowels move superstars
MC’s got it doo doo
Get down, y’all know how the mayor sound
Big player sound, throw feces at the windshield wiper
You swing off the road with a diaper
The shit hit the wall, the studio formica
The urine roll off the wall, bounce off the top of your head
Drip on your cypher
The Michael Jackson of rap with my fuckin glove
You niggaz are bullshit, turtledove
You’re low class turtle bugs
Fuck them drinks at the pubs
The jam comes like lightning dubs”

“The Commi$$ioner 2” swings wildly back and forth between tolerably tight tracks like “Bob Boss” and utter audio nightmares like “Cornfield” or “Knock on the Door.” The 1100 loyal people who purchased this album are either completely satisfied that Keith is as nutty as ever or wondering if they can resell this “limited edition” on eBay for a huge profit. I can’t say I’m not tempted to unload this disc (#447) but as a fan of Keith’s I’m keeping it, because even though a lack of direction, focus and good music makes many of his solo albums a nightmare, Keith is always disturbed enough to keep things interesting. I guess that’s a good enough niche to sell 1100 of anything in a world of billions, but it’s also sad to see a man with so much talent in his arsenal limited himself to firing potshots out of homemade slingshots.