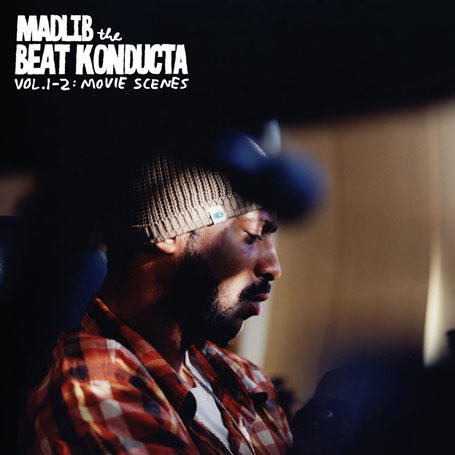 Little did we anticipate the discographical wealth one Madlib would amass in the years to come when we first deciphered the name Lootpack in the credits of the first two Alkaholiks albums. In 1999, the trio of Madlib, Wildchild and DJ Romes released its first and only longplayer on Stones Throw, the adventurous “Soundpieces: Da Antidote.” Keeping ties with the label, Madlib soon established himself not only as one of our time’s most productive and prolific beatmakers, but also as a multifaceted recording artist who creates multiple personalities to manage his diverse musical interests. Aliases such as Yesterdays New Quintet, Quasimoto, Monk Hughes, DJ Rels and collaborative efforts like Jaylib and Madvillain are all part of the multitracking that results in the Madlib opus.

The Beat Conductor being one of Madlib’s earlier handles and in use since the Lootpack days, it initially graced the record sleeve of the double 7″ of the same name, released in 2001 under the moniker The Loopdigga, containing 13 brief instrumentals. In late 2005 and early 2006 Stones Throw released two 12″s entitled “Vol. 1: Movie Scenes” and “Vol. 2: Movie Scenes, The Sequel,” which last spring were collected on CD, amounting to no less than 35 tracks.

Keeping the project’s origins in mind prevents misconceptions about the “Movie Scenes” CD, as it has the appeal of a work in progress. Pressing play is like opening a door and catching Madlib in the act of beatmaking. Almost every track here is subject to change as if it would come into existence at this very instant, as he adjusts volumes, probes samples, inserts vocals, sequences this part, loops that part, examining everything to see if it can be utilized. The end of the track equals the closing of the door, and the start of the next one the re-opening of the door some time later, just to witness him handling yet another set of musical data. And so forth. The challenge the listener faces is that the doors open and close incessantly, forcing you to deal with nearly three dozen beat sketches that are often segmented even further. Instrumentals? In the sense that no one raps over them, yes. In the sense that they’re fully furnished arrangements you can fall back into? No.

Why do people still bring up DJ Shadow’s “Endtroducing…”? Because it was a full-grown instrumental album, at that point probably the most cohesive with a hip-hop background. Looking at this CD like a traditionally conceived and composed album, true mastership would lie in shaping the bits and pieces of “Movie Scenes” into self-sustained individuals. As indicated, that was probably not Madlib’s intent. So while the RZA scores real movie scenes, the Beat Konducta and we, the listeners, are still busy imagining potential action as it might enfold during these musical short cuts. Conceptually, electronic music and its myriad variations are far ahead of something like “Movie Scenes,” which in that regard still reflects the short attention span of hip-hop.

The length of a piece of music can serve as an indicator of the importance a musician, composer, producer attributes to it. In a way hip-hop with its initial idea of extending certain segments supports that notion. That all-too short intro, that break buried somewhere, that brief instrumental part, by looping them, hip-hop assigns them a greater importance than intended by the original artist. With many tracks nearing the two-minute mark but only few passing it, it seems Madlib doesn’t deem his creations all that important himself. The beats are interesting, but by (often literally) cutting them short, he jeopardizes said interest. With so much variation already implemented, some tracks are even further divided as Madlib preludes them with an intro that musically has little to do with what follows. Whenever vocals are used, the tracks tend to gain purpose and direction. But not even the Inspectah Deck cuts tie the arbitrary arrangement that is “Eternal Broadcaster (Authentic)” together.

Scruffy and stunted as they are, you’ll grow to like some of these scenes. But you’ll have a hard time relating them individually to your personal history like you would other, more memorable listening experiences. At the same time you simply have to marvel at how much movement Madlib can choreograph in just under two minutes. “Movie Scenes” chronicles a man’s obsession with recorded music. It is the work of someone who embraces tape hiss and vinyl static, the work of an audio archaelogist, who is equally interested in melodic and percussive elements. Selections such as “Tape Hiss (Dirty)” or “Two Timer (The Pimp)” can make you realize how a piece of music is a living thing and how someone like Madlib can reanimate music by sampling it, by rearranging it, by putting it into a new context. A lesser known producer would be told to make some real beats for a change. Madlib’s track record and his trustful record label enable him to release 60 minutes of beat studies.

Witness him hunched over the deep dub-like groove of “Face The Sun (Africa)” paying attention to an obnoxious bell, fading it just to bring it back. Catch him finding inspiration in ’60s scores. Be astounded as he forges the most obscure, off-key loops into a catchy form. Be annoyed by his refusal to trust a steady groove. To Madlib’s credit, “Movie Scenes” is never too creative for its own good. In a hip-hop/modern music context, it all makes perfectly sense. “Open (Space)” solemnly paints Kraftwerk’s “Trans-Europe Express” black. “Electric Company (Voltage-Watts)” is some way-out-there retro-futuristic shit with no hip-hop beat in sight but still highly informative in regards to Madlib’s method thanks to various spoken snippets, among them a voice that says: “No keyboard performances, just the occasional pressing of buttons (…) You just press a button and things happen.” “Movie Scenes” is what happens when Madlib presses buttons, turns knobs and hits switches. And in most cases, he makes sound decisions. He just should have stuck to them for a bit longer.

Madlib loves music. You can tell by the way he handles it. He loves music like a carpenter loves wood, like a mathematician loves numbers. There’s more than an anything-goes approach and experimental nature to Madlib, he is intrigued by the emotional allure of sounds. He tries to master music’s hypnotic powers, tries to extract the original artist’s intentions. Behind its scattershot facade, “Movie Scenes” is also a guide to how the black experience expresses itself in music, the track titles often serving as pointers and many samples evoking a specific era.

But like all credible producers that build on the previous, he takes the old to the new. The vocal samples comment on the present as much as on the past. Madlib lets M.O.P.’s Lil Fame compliment James Brown’s “I’m mad!” holler (“The Payback (Gotta)”), extracts socio-political wordplay from the Watts Prophets (“Pyramids (Change)”), borrows the voices of the elders to warn of backstabbers (“Friends (Foes)”), to lament, “Why must it be so hard for me” (“The Come Up (The Come Down)”), or to look woefully into the future (“Old Age (Youngblood)”).

Ultimately, this CD reminds me of that Lord Finesse line “I’m mystical, magical, I might confuse a few.” “Movie Scenes” is mystical, it is magical, and it’s also prone to confuse some. Especially those who are dumbfounded by an invitation like the one “Third Ear (More)” extends, to “listen with the third ear.” I don’t think most of us were given one of those. But we might learn something just from trying to find out.