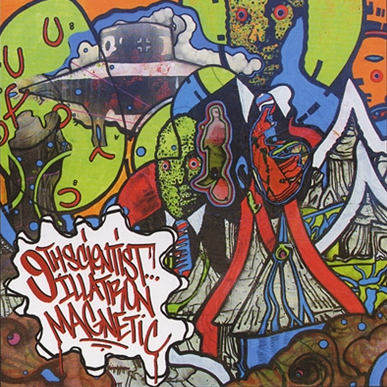 9th Scientist lives up to his moniker on his latest release, “Illatron Magnetic.” 9th’s style will remind cats of that crazy professor back in high school or college; the dude who could bore you to death with his lectures, but be just as quick to blow something up in the lab to get back your attention. This is not to say that 9th doesn’t have content in his raps, because he does. He fails when he packs in way too much knowledge into his flows. My head is still dazed from trying to decipher this guy’s message on a few tracks. Nevertheless, I’ll take an overdose of complex verbiage over the pointless garbage polluting radio stations nowadays. If listeners manage to stay awake through his occasional tangents, they’ll be rewarded with a smack of gritty, conscious hip-hop.

The Arkansas native’s voice is reminiscent of Killah Priest’s, as are his occasional religious references. He’s a deep thinker with an equally deep vocabulary. Unfortunately, those big words aren’t always conducive with songs that make your head bop. His cadence sounds unnatural at times, especially when he draws out his rhyme schemes over too many bars. Despite his flaws, he remains an acquired taste. 9th isn’t afraid to challenge listeners to absorb and review his rhymes. It’s as if he is testing them to see if they’re worthy of peeping his knowledge, a task that takes multiple listens to accomplish.

Once listeners pass the test, they’ll see those verbal puzzles as evidence of his passion for lyricism and hip-hop in general. He displays his passion for the culture on tracks like “I love hip hop.” Besides the obvious song title, 9th shows his respect for the game by preaching about dedication to his craft and longing for Rap City “before it went bling.” The beat’s middle-eastern woodwind sample creates an intriguing sound that would make Timbaland (or Scott Storch, depeding on who you ask) proud

The passion 9th spits with on some tracks doesn’t always appear on others. “Orange Crush” is his perplexing attempt at addressing the ills of the world. He tries to weave together images of crack sales, natural disasters, Sly Stone, and the Fantastic Four, and what results is a jumbled heap of rhymes. This song has no sense of direction, and it doesn’t help that 9th decides to get his Ben Stein on. His monotone delivery makes him sound like a professor giving a nap-inducing speech, and the beat is just as boring.

Napping listeners will awake on tracks like “Verse’s” or “Green,” which both feature jolting guest performances. Ill Chemist’s cameo on “Verse’s” is a perfect contrast to the controlled flows of 9th Scientist. Beats are switched on the track between 9th’s verse and Ill Chemist’s, and Ill Chemist absolutely murders his instrumental. He spits with reckless abandon, the verbal equivalent of Dennis Rodman diving into the stands for loose balls.

Female emcee Quantic is the guest on “Green,” a track that evokes memories of vintage Digable Planets when she flows. Quantic’s voice is eerily similar to Ladybug Mecca’s, and it’s easy to see the Planets spitting on the same bass-heavy, laid-back beat. Unlike “Verse’s,” however, 9th fails to hold his own against Quantic’s precise social commentary about materialism. 9th once again loses a main focus for his rhymes; one second he’s tracing his lineage all the way back to Noah, then he’s spitting about “the simple things in life,” which he lists as coffee shops and drinking mochas.

Despite his inconsistent lyricism, 9th’ is armed with a diverse beat arrangement. The instrumentals vary; some follow the classic, soul-sampled format, while others are gutter, Rza-esque productions. A majority of the beats are solid, with the standout being “Eye thought she was feeling me,” which is actually a solo track for guest emcee Infinito 2017. Behind a jazzy saxophone loop, the Molemen affiliate traces his roller coaster relationship with a mysterious female. The song generates an ambiance that echoes the Native Tongues era, as a carefree attitude exudes from the track despite its emo-rap appeal.

“Illatron Magnetic” is a record that will leave rap heads satisfied, but almost everyone else will be thoroughly confused. There’s plenty of subject matter throughout; even the skits are meant to make a statement on black exploitation and other social issues. The plethora of guests, as well as the strength of those emcees, makes it hard for 9th to firmly establish his identity on this LP. Sure, he’s all about real hip-hop and the diminishment of ignorance, and that’s cool. The problem is he does nothing to really stand out on his own album. I remember no quotable punchlines or jaw-dropping observations. He never rises out of the water, but instead simply wades as others take the spotlight.