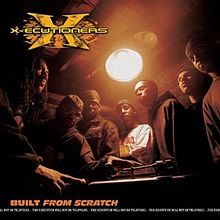 If you’re a fan of the turntablist arts – or put more simply, if you like talented DJ’s who can mix and do tricks – then you already know these X-Men. True mutants of the music industry, the venerable vinyl wielders Rob Swift, Roc Raida, Total Eclipse and Mista Sinista due with dusty grooves what Picasso and Van Gogh did with paint – except the landscapes these maestros create is built on sound. As a matter of fact, it’s “Built From Scratch.”

Five years ago, these technicians of Technics attempted to solidfy their already solid live reputation with the album “X-Pressions” on indie label Asphodel. Unfortunately the album was crippled by a lack of publicity and the fact no big-name MC’s contributed to any of their tracks. While all veteran hip-hop fans love to hear a DJ get wicked on the 1200’s, it’s undeniable that a great DJ with a great rapper or group is even better. What would Run-D.M.C. be without Jam Master Jay? What’s MC Shan without Marley Marl? Can you even imagine Public Enemy without Terminator X?

This time around, the X-Ecutioners have taken the best elements of their musical wizardy on wax and broadened the horizons by bringing in an array of all-star performers. Starting it off right on “XL” is Large Professor, a legendary rapping producer in his own right. Roc Raida and Knobody provide a vicious Brookly banger of guitars and drums for M.O.P. to rap over on “Let it Bang,” and crossover comes in the other direction too as members of Linkin Park produce and rap on “It’s Goin’ Down” with X-Ecutioners providing scratch. Lest you think the musical mayhem swing too far away from hip-hop though, you’re in for a real rare treat: Kool G. Rap and the late great Big Pun rapping together on “Dramacyde.”

These four songs alone would be worth the price of admission (a surprisingly low $9.99, at least at Best Buy) but the X-Ecutioners do not dissapoint on the more strictly skills oriented tracks either. If you’re the kind of hip-hop head who has DJ albums by T-Rock and Q*Bert in your collection you won’t be dissapointed by tracks like “X-Ecutioners Scratch” or “A Journey Into Sound.” Dan the Automator produces the x-cellent “X-Ecutioners (Theme) Song” and “Premier’s X-ecution” features a guest beat and vinyl slice by who else but perennial hip-hop favorite DJ Premier. Hip-Hop’s legendary mouth music vocalist turned DJ Biz Markie even gets into the act with the remake “Genius of Love 2002,” a worthy tribute to the original song.

Some people are probably going to hate on this album because the X-Ecutioners are reaching out to a broader audience than turntablist fans this time, but this reviewer is glad to see four such skilled DJ’s bringing a still relatively uninformed public deeper into the world of hip-hop elements. The pinnacle of this achievment has to be the thumping track “The X (Y’all Know the Name)” featuring the rap talents of (who else) Pharoahe Monch and Xzibit, with the X-TRA bonus of Inspectah Deck and Mad Skillz getting wreck. The fact that this track can appeal to both vinyl junkies and hardcore mic-wrecking fans proves that these X-Men know X-ACTLY what the fuck they’re doing. Can you pass on this album and still be a true head? Maybe, but be careful you don’t get X-ecuted.